He was the oldest and the first of them to turn pro, 20 years ago, at the precocious age of 16. He's the one many tennis fans initially would have tabbed Most Likely to Spontaneously Combust.

Fooled you. Instead of going up in flames, Andre Agassi burned his athletic candle at both ends. He is the last of his fabled generation still playing, and when he shoulders his racket bag after his final match at the U.S. Open, he'll formally end an era in American men's tennis that may be impossible to replicate.

"It's a sad day for me to see him retire," Jim Courier said, harkening back to the competitive fraternity formed by the five premier U.S. players of his day. "It's like seeing your last friend graduate from college. It really means you're a grown-up now, and it's fully in the next generation's hands. I live a little bit vicariously through him, loudly when I'm not broadcasting and very quietly when I am."

Agassi, Todd Martin, Courier, Pete Sampras and Michael Chang were born in that order in a statistically improbable cluster between April 1970 and February 1972. They grew up in the Nevada desert, on both coasts and in the Midwest. They represented a potpourri of ethnic backgrounds, and their fathers included a former boxer, a research chemist and a civil engineer.

None of them would be confused in a police lineup. Scrappy baseliner Chang was an eternally boyish 5-foot-9, while the 6-foot-6 Martin had an elder statesman's aura long before he retired. Agassi morphed from a Rapunzel-tressed teen trendsetter in denim shorts to a streamlined fitness freak, retaining only his steady, soulful gaze. Sampras was a darkly clean-cut assassin on his serve and at the net; the ruddy, big-swinging Courier was seldom without his regular-guy ballcap.

Together, they would win 27 Grand Slam championships, 189 tournament titles in all. (A sixth American, MaliVai Washington, reached his only Grand Slam final at Wimbledon in 1996.) They led the U.S. team to Davis Cup trophies in 1990, 1992 and 1995.

Other countries have experienced simultaneous surges and great players whose peak periods have overlapped. Australians John Newcombe, Rod Laver and Ken Rosewall combined for 14 Grand Slam titles in the post-1968 Open era, continuing the success they began in the '50s and early '60s when they played alongside countrymen Roy Emerson and Lew Hoad.

American legends Jimmy Connors and John McEnroe swashbuckled their way to 15 Slam wins from 1974-84, and their careers intersected with those of Arthur Ashe, Roscoe Tanner and Stan Smith, who won another six.

The so-called Spanish Armada that included French Open champions Sergi Bruguera and Carlos Moya drew attention chiefly for their clay-court mastery in the mid-'90s. If the fleet of Russian women who have sailed into the WTA's top 10 continues its success, history may someday view them as a conquering navy.

But the globalization of the game and the body-bashing expansion of the tournament calendar are making it increasingly hard for players from one country to hold court. The record of the Fab Five could become a fossil in relatively short order.

"I don't think it's going to happen again," Martin said. "I think we can produce five players as good as we were, but not necessarily as good relative to the global competition."

Each one would have been accomplished on his own, but their joint emergence and intertwined careers had a synergetic effect, said Martin, who often modestly excludes himself from the elite group despite his two Grand Slam finals appearances and eight career tournament wins.

"They took the challenge of wanting to be as good as someone else, and tried to apply it to their own development," he said. "It gave them a target and granted them belief in their goals, which they continued to tweak."

A graph of their achievements would show five very distinct arcs.

Chang, a U.S. junior champion, became the youngest-ever Grand Slam event winner, capturing the 1989 French Open at age 17. He played at the top level for another 14 years without winning another. Martin waited to turn pro until he was 20 and an NCAA champion out of Northwestern University.

Agassi and Courier exploded on the scene as teenaged products of Nick Bollettieri's academy in Florida. Courier then proceeded to plant the flag for his generation when he won four Slams in a two-year span from 1991-93. Edgy phenom Agassi went four years without a Slam title, sank to No. 141 in the rankings, then proceeded to win five of his eight Slams after the age of 29, starting with an emotional victory at Roland Garros in 1999.

Sampras dominated for most of his career, but spent his last two seasons facing regular calls for his retirement before winning the 2002 U.S. Open to capture his 14th and final Slam, an all-time record.

Consider the numbers the Fab Five put up during their remarkable run:
• Won at least one Grand Slam event every year from 1989 to 2003. 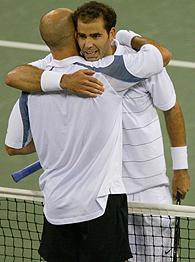 • One member of this same trio held the year-end No. 1 ranking every season from 1992 through 1999. They spent a career total of 445 weeks atop the standings.

Clearly, Sampras was first among equals in this group; he is the only one of the five to have winning records against the other four. His dynamic rivalry with Agassi is at the core of the group's collective charisma. Their dueling ended at 20 wins for Sampras and 14 for Agassi -- almost identical to McEnroe's 21-14 ledger against Connors -- although Sampras had a 4-1 edge in Slam finals.

Sampras was the acknowledged king of the serve-and-volley game, Agassi the universally acclaimed prince of service returns. But it was the durability of their rivalry, the dense competitive web spun by two peers who became superstars, that made it appealing to fans, not the fine points of their playing technique.

"We've grown up together," Agassi said before their final match. "I think as we've gotten older, we both have grown in our capacity to appreciate what the other one has meant to each other and to the game."

Bonnie DeSimone is a freelance writer who contributes frequently to ESPN.com and will be covering the U.S. Open for ESPN.com.