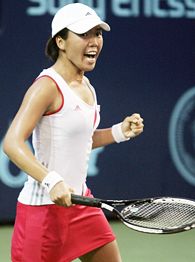 The normally levelheaded King sounded slightly giddy with fatigue and accomplishment in a phone interview late Sunday night her time. "I can't believe I won a tournament,'' she said. "Too bad I'm not legal to drink.

"Everything just clicked this week. My serve has improved tremendously, the courts were jumping quite fast and I was being really aggressive."

Advised that James Blake had successfully defended his title in Stockholm that same afternoon, King laughed and said, "His win was a little more expected.''

True enough, but both victories offer continued proof that Blake and King -- the former a sturdy late bloomer, the latter a pro for just three months -- are in startlingly good late-season form.

Blake, 26, defeated Finland's Jarkko Nieminen 6-4, 6-2 before a crowd that included Bjorn Borg. The presence of the stoic Swede made Blake, a self-described former bratty kid who has cleaned up his act in recent years, anxious about keeping his language and demeanor clean, he said.

That little extra dose of nerves didn't seem to impede Blake. Stockholm marked the second straight final Blake has won handily and earned him his first back-to-back titles on the men's tour. His five championships this season tie him with No. 2 Rafael Nadal for the second most on tour.

Blake's self-assessment was a nifty turn of phrase: "The easier it looks, the harder you've worked to make it look easy.'' But as he heads into the Masters Series tournaments in Madrid and Paris over the next two weeks, he is going to try to take that work rate up another notch.

Merklein had been traveling with 16-year-old players in the USTA's High Performance development program. "I apologize to those juniors,'' Blake said. "They're going to miss out.''

Blake and Merklein, a former NCAA singles champion from the University of Florida and Davis Cup player for the Bahamas, got to know each other when they teamed up for doubles on the pro tour. They won a title together in Scottsdale in 2003.

"I was really impressed with him,'' Blake said. "He's one of these guys with a real thirst for knowledge. He's one of the most versatile coaches out there. And I think it's going to benefit him, since he'll be able to watch Brian, who in my very biased opinion is the best coach in the world.

"Things like stretching and diet can make a difference. If it's 7-6 in a match and I win by two points because of that, you never know how much that's going to happen in a year. It's a no-lose situation.''

Blake remains sixth in the qualification race for the ATP year-end championships in Shanghai. When he won in Stockholm a year ago, he was still considered a comeback player following a period of injuries, illness and the death of his father; now, after almost an entire season in the top 10, he's demonstrated staying power.

"My forehand is more effective,'' he said. "It's not as much of a flashy shot that can hurt people sometimes. My backhand's much more solid. But the main thing is that mentally, when things go wrong, I don't hang my head. I stay positive.''

King became the second American woman to win a WTA event this season. Meghann Shaughnessy, whom King beat in the semifinals in Bangkok, won two lower-rung tournaments earlier this year. King also has struck gold with Croatia's 52nd-ranked Kostanic after pairing up for doubles three weeks ago. The tandem has reached the final in all three tournaments since, losing in Guangzhou and winning in Tokyo and now Bangkok.

An evil-eyed singles draw pitted them against each other in the quarterfinals, a situation King admitted she found "really awkward.''

"We actually warmed up together, since we've been doing it all week,'' King said.

King is now ranked No. 54. She is headed home to Long Beach, Calif., for a few days of rest before playing her last tournament of the season, in Quebec City. She'll turn 18 next February and no longer will be bound by the WTA's restriction limiting players her age to 15 regular tour events per season.

Odds and ends: Strange as it might seem, there had never been an all-Russian men's final in the Kremlin Cup until winner Nikolay Davydenko met (and defeated) countryman Marat Safin in the final Sunday.  The home sweep continued on the women's side with Anna Chakvetadze's win over Nadia Petrova, who lost for the first time in six WTA finals this season.  Croatia's Ivan Ljubicic didn't lose his serve once in his scorched-earth march to the title in Vienna. It should have been a familiar feeling, since he did the same thing last year. Ljubicic's 60th match win of 2006 represents a personal best.

Signing off: Safin's Kremlin Cup blog on the ATP Web site was notable for a number of anecdotes, but perhaps most of all for some of his earthy parting words. The charismatic Russian, who feels he is playing himself back into form after struggling for nearly two full years, seemed to warm to the task as the week went on.

His first couple of entries closed with fairly standard lines like "Speak to you tomorrow" and "Thanks for reading me.''

The more Safin won, the more philosophical he got.

"I wish you all sweet dreams and no nightmares,'' he dictated to ATP staffer Nicola Arzani. "If you're not alone, I wish that the person next to you loves you very much and hopefully for you, you feel the same for the other person, otherwise you will have a tough time falling asleep.''

And the next day: "One more day above the ground is a good day. So please all of you do me a favor and enjoy it as much as you can and be good to the people around you, no matter who they are because love and beauty will save the world.''

And finally, the night before the final:

"Enjoy the Saturday night. I am jealous of all of you. Not of course the people in Australia as they will have a hangover already from the night before. People from Moscow, Paris, London. Then I will be jealous of people in New York and then people in Miami. To all the party animals, all my best wishes. Take your drinks in proportion. Don't lose you [sic] brain, which is stupid to wish this as I think people drink to lose their brains. Be careful of the drugs as they can be dangerous. Hopefully everyone will be with someone. Or if not, they will not feel lonely for one reason or other. For those with girlfriends and boyfriends have a simple evening, watching the television and arguments over who will wash the dishes. Enjoy it.''