A lot of ink got spilled and keystrokes logged on the malaise in American tennis this season. No U.S. player made it to the semifinal round of any Grand Slam event until Andy Roddick surged to the U.S. Open final. The Williams sisters' long absence deprived the women's game of two proven headliners in every sense of that word. Lindsay Davenport spent much of the year sidelined, and Andre Agassi and Martina Navratilova bowed out, making 2007 the first year since 1981 that neither will compete under U.S. colors.

All this teeth-gnashing might not be doing justice to the big picture, however. Breaking down the numbers reveals a few less obvious trends. 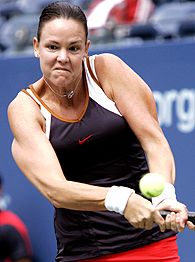 Women: Up-and-comers, old faithfuls, worker bees
There's no denying the U.S. took a hit rankingswise this year. Davenport ended the 2005 season as No. 1 for the second straight year, and Venus and Serena Williams finished at 10th and 11th, respectively. How distant those days seem now. But there actually are more U.S. women in the top 50 at the moment (six) than there were at the end of last season (four), and more significantly, three of the six hit career highs this season. No. 46 Jamea Jackson and No. 50 Vania King are at career highs this week.

Seven of the 12 will finish the season with a significantly improved ranking. Of the five who slid, two are the Williams sisters, whose ambivalence about the future has been well-chronicled. Two, Davenport and Craybas, are over 30 and presumably near the end of their careers -- although Craybas deserves credit for a hot start that saw her notch a career-high No. 39 in April. The fifth is Granville, who has struggled this season but recently found a doubles groove, winning a U.S. Pro Circuit tournament and a WTA event in Quebec City with partner Carly Gullickson.

Three young players somewhat overlooked (or dismissed as being unable to fill the void left by Williams/Williams/Davenport) before this season all distinguished themselves. King, 17, who turned pro in July, was the only American woman aside from Shaughnessy to win a WTA event this season; the 20-year-old Jackson single-handedly led the Fed Cup team past Germany in April; and Perry, 22, reached a career-high No. 40 in August. They might not be taking the express elevator to the top, but then again, some teenagers who did that got a bad case of vertigo later on.

The U.S. players who dropped out of the top 100 from last year to this were all veterans: Amy Frazier, Mashona Washington and Lisa Raymond. Raymond, however, has a valid excuse for not focusing on her singles game. She and Aussie partner Samantha Stosur are the world's top-ranked doubles team, making Raymond the only American woman competing at the WTA year-end championships this week.

A few words about one of the worker bees. The 28-year-old Osterloh is poised for her best year-end finish since 2001, a modest one just inside the top 100, but progress nonetheless. Last week, she earned a qualifier's slot for the main draw of a WTA event in Quebec City and made it to the semifinals before losing to eventual champion Marion Bartoli of France. It was the first time she had advanced that far in a tour event since 2002.

Osterloh, the 1997 NCAA singles champion from Stanford, attributed the result to "the teamwork with my new coach." That would be Rikard Allgurin of Sweden, who formerly guided current top-25 players Li Na of China and Russia's Anna Chakvetadze. Osterloh splits coaching costs with a Finnish player.

"I haven't had a full-time traveling coach since I was working with Ola Malmqvist from the USTA," said Osterloh, who is playing in a Pro Circuit tournament in Pittsburgh this week. "I had been contemplating going back to school, but at the end of last year I had a good run, and now I've really found a new motivation. I want to give it a full go, because I'm near the end of my career. I still love competing."

A native of Columbus, Ohio, Osterloh recently moved to the Pacific Heights neighborhood of San Francisco, where she can get a hill workout just a few steps from her front door. She said deciding when to stop playing could be even more "bittersweet" than making the choice to leave college after her freshman year.

"I've made a commitment and I'm dedicated to daily hard work," she said. "I might have taken things a little for granted. I made it to the top 50 so quickly."

Men: A mix of happy, humbled, hobbled
So what's to complain about? There are two U.S. players in the top 10, same as last year. Roddick's early-season wobbling brought Jimmy Connors off the couch and into the coach's box, a fascinating and effective transfusion of old blood into young muscle. James Blake won five titles. Bob and Mike Bryan will finish atop the doubles standings again.

The problem on the singles side, and this is not an original concept, comes after the two leading men. Then again, perhaps American tennis fans are just overly accustomed to endless waves of talent rolling up on the beach.

Those seven represent a net loss of two from last year; Agassi, Kevin Kim, Bobby Reynolds and the injured Taylor Dent dropped out. Fish had an admirable year coming off wrist surgery and jumped back in, as did Gimelstob, whose on-court future remains iffy because of his chronic back problems. Ginepri, the youngest of the bunch, couldn't carry over the momentum he gained in the second half of last year.

Spadea published a tell-all book and did not perish, while Goldstein beat the odds by achieving a career-high No. 58 at age 29 in April. He has since turned 30, and if he keeps at this long enough, his age and ranking might intersect.

There will be plenty of time to stew about how best to develop the next crop of great American players, but meanwhile, it should be entertaining to watch the two who are still alive in the ATP year-end championships. Roddick has played sparingly since the U.S. Open. Blake has been knocking down his goals, like bowling pins, one at a time and would love nothing more than a big strike.