MADRID, Spain -- Justine Henin-Hardenne will finish the year as the top-ranked player in women's tennis after beating Maria Sharapova 6-2, 7-5 (5) on Saturday in the semifinals of the WTA Championships. 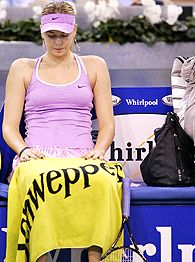 Henin-Hardenne will face defending champion Amelie Mauresmo in Sunday's final, with $1 million going to the winner. Mauresmo advanced to the final with a 6-2, 3-6, 6-3 victory over two-time winner Kim Clijsters.

The victory clinched Henin-Hardenne's second year-end No. 1 ranking. Mauresmo will finish her 34 consecutive weeks as No. 1 at the end of the tournament.

Henin-Hardenne won the French Open and was the runner-up at the three other Grand Slam tournaments this year -- the first woman since Martina Hingis in 1997 to reach all four major finals. She lost to Mauresmo at the Australian Open and Wimbledon.

"It's the last match of the year and obviously it's great to have Justine and I in a final again, after we had a tough match yesterday," Mauresmo said. "Hopefully she'll party [tonight] with her No. 1 ranking."

Henin-Hardenne can clinch a tour-high sixth title of 2006 in Madrid after missing nearly two months while recovering from a muscle tear in her right knee.

"It's amazing. I'm very happy," Henin-Hardenne said. "I'm very happy with the way I handled the pressure today. The season is not over yet. I'm No. 1 but I still want to win this tournament.

"I had a great season and I know there are a few players who deserve it, too, but it's not easy to go to the four finals of the Grand Slams, and I played very consistently all year. So I think I deserve [No. 1]."

Henin-Hardenne beat Sharapova for the third time in four meetings this year -- the Belgian's only loss coming in the U.S. Open final.

Henin-Hardenne, who had seven aces, had three service breaks in the first set while forcing Sharapova into 14 unforced errors. Henin-Hardenne converted her fourth break point in the eighth game of the second set to take a 5-3 lead when Sharapova hit a forehand into the net.

Sharapova rallied with her first break of the second set when Henin-Hardenne sent a forehand into the net. Both players then held serve to force the tiebreaker.

The Russian saved one match point at 6-4 in the tiebreaker, but Henin-Hardenne converted on her second try to give Sharapova only her second loss in 11 tiebreakers this year.

"You hope to find a way to break through that, and I felt like I was getting there at the end of the match, but I just couldn't put two or three good points together."

Sharapova finished the season with a career-high five titles, including her second Grand Slam title at the U.S. Open.

"I've had an amazing year, a very successful year, and I'll finish the highest I have in my career," Sharapova said. "You always think about what went wrong and what could have gone better, but I'm happy with the way I played and just look forward to what I can improve for next year."