Three-time Grand Slam winner Lindsay Davenport, who is expecting her first child next spring, told ESPN.com on Wednesday that her priorities will shift to family and she has "no plans to play again." 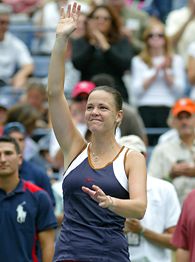 "I hate the word 'retirement,' but this season was such a struggle physically for me, and I can't imagine playing again," Davenport said by phone from her home in Southern California. "I can't say there's any sadness, yet, about missing tennis. My life is with my husband and my future child.

"I feel like the second part of my life is about to begin, and I feel so lucky that if everything goes well, I'm able to go out like this. The timing couldn't be better," she said.

Davenport, 30, missed much of the 2006 season with chronic back pain. She returned to play several late-season tournaments, reaching the final at New Haven and the U.S. Open quarterfinals, and was noncommittal about her playing future throughout the summer and fall. She finished the season as the top-ranked U.S. woman at No. 25.

On Wednesday, Davenport sounded elated about imminent motherhood and unfazed at the prospect of ending her distinguished 15-year career. She said she and her husband of three years, former USC All-American Jon Leach, weren't planning for a pregnancy but took the "if it happens, we'll be happy" approach.

Aside from fatigue, she said she feels great physically.

"It's been wonderful," said Davenport, who said she is due in May. "I'm blessed -- both my mom and my sisters had easy pregnancies. It's just been hard not telling people."

Davenport was still keeping mum when she flew to the East Coast last week to participate in two exhibition events for charity. In Baltimore, where she played mixed doubles with Mike Bryan against Martina Navratilova and Bob Bryan at Pam Shriver's annual benefit, she reflected on the constant questions she fielded late this season.

"It's a little bit my fault," Davenport said last week. "I was probably a little bit too honest with my feelings throughout the years. There's no question after you've played so many years that you go up and down with your motivation."

"I hate the word 'retirement,' but this season was such a struggle physically for me, and I can't imagine playing again."
-- Lindsay Davenport

Davenport openly talked about quitting a couple seasons ago because of the wear and tear and her desire to start a family. She half-wishes now that she had kept her thoughts to herself.

"But there's some truth in that I've been playing 15 years and me talking about it gives [reporters] some credibility to talk about it," she said.

At the U.S. Open, Davenport sometimes felt she was being pushed to join Andre Agassi and Martina Navratilova, who took their final curtain calls there.

"I was sitting there, like, 'This might be my last Open, it might not,'" she said. "'I'm not tricking you guys, I just have no plans.'

"I had a great time playing. I was really glad I was able to get healthy and play there.  We were talking about Mary [Pierce] and Jennifer [Capriati]. That's a position I'm very happy I'm not in," she said.

Pierce and Capriati, whose playing futures are threatened by serious injuries, were among Davenport's top contemporaries in a pro career that began in 1993.

Davenport, a tall, good-natured Los Angeles-area native and daughter of two volleyball enthusiasts, was one of several players who ushered in an era of power tennis in the women's game of the late 1990s. Her balanced game and low-key, modest personality made her a popular and admired player on the women's tour.

She won 51 singles titles -- ninth on the all-time list -- captured the WTA's year-end championships in 1999 and finished atop the tour's year-end rankings four times, in 1998, 2001, 2004 and 2005. She also played doubles for most of her career and earned Grand Slam doubles championships on three surfaces.

She won the Australian Open, Wimbledon and the U.S. Open singles titles in a three-year stretch from 1998 to 2000, along with an Olympic gold medal in 1996. Injuries sidelined her for much of the 2002 season, but she came back to have sensational years in 2004 and 2005, winning 13 tournaments.

Davenport played in two Grand Slam finals in 2005 and her loss to Venus Williams at Wimbledon that summer was both the longest ever championship match in that tournament's history and one of the most taut, exciting women's matches in recent memory.

"I'm excited for her," U.S. Fed Cup captain Zina Garrison said. "She's very family-oriented, has a great, close-knit family. I don't think she would have any regrets. She can walk away knowing she gave her all."