SAN JOSE, Calif. -- Sam Querrey opted for on-the-job training instead of going to college, but socially, sometimes it's hard to tell the difference. At 19, he's a popular freshman pledge in the close-knit fraternity of elite U.S. tennis players.

Life is sweet and the class schedule is full right now for the 6-foot-6 Southern Californian with the shock of sun-bleached hair, the amiable grin and the endearingly unfiltered view of life. Querrey is a consensus pick to be -- literally -- the next Big Man On Campus, but that expectation seems to ride lightly on his wide shoulders.

He turned pro last June and climbed into the top 100 last month (he's currently No. 92) after two wins at the Australian Open. He was embraced by players he admires when he tagged along as a practice partner with the Davis Cup team. He's spent quality hitting time with Andy Roddick during weeklong sessions in Texas and Hawaii. Pete Sampras invited him over for a few practice sets. Sampras was having so much fun with Querrey that he continued to play after a bloody nose turned his shirt crimson. 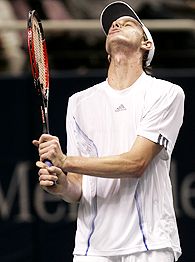 Thursday here at the SAP Open, Querrey faced the No. 4 Roddick for the first time that counted in a shootout at the HP Pavilion. Querrey wore white. Roddick wore black. Both wore ball caps with the brims set straight ahead. Tennis Present, meet Near Future.

Their games are similarly anchored in punishing serves and huge forehands, but they're not mirror images. Five years and a fair amount of psychic distance separate the two. Querrey pushed Roddick to a second-set tiebreak before succumbing 6-4, 7-6 (3). Minutes later, in a postmatch on-court interview, Querrey agreed that Roddick was his "idol."

Later, Querrey told reporters that was a slight overstatement. "I look up to [Roddick] as a player and I'm thankful for everything he's done for me," he said. "I try to do things the way he does them. I've got to get over the fact that we're friends. Everyone plays their friends on tour.

"I've played five top-10 guys and lost to all of them fairly close. I've just got to beat one of them, one of these days."

Most people believe he can, and soon. Veteran Paul Goldstein, a Stanford graduate generally biased in favor of going to college, said he has no doubt Querrey was right to walk away from a scholarship to USC.

Querrey told The New York Times last summer that his choice was influenced by his father's experience. Mike Querrey, a talented infielder, was drafted by the Detroit Tigers out of high school but decided to go to the University of Arizona and later regretted not taking a shot at a pro career.

Roddick predicted Querrey will crack the top 30 by year's end.

"Two years ago, I felt like he had an after-school game," Roddick said Thursday. "Now I feel like he's learning all the time. He's willing to listen. He doesn't act like he knows anything yet. He's funny, and he has a big heart."

The lanky, laid-back Querrey sometimes appears to be ambling through his first months as a pro, but that's a bit of an optical illusion.

Querrey's way is to be casual around the edges and competitive at the core. He's moving toward integrating the two, said his coach, Grant Doyle.

"He's getting better at showing the emotion he needs to on the court," said Doyle, who has worked with Querrey for more than three years. "He was a little placid, even last year. But he's turned the corner."

Querrey isn't inclined to apply any coats of varnish to the truth as he sees it. He enjoyed meeting one of Roddick's coaches, Jimmy Connors, but said spending time with Roddick was more of a thrill because "he's more my era."

On whether he feels he belongs at this level yet: "It's not like you don't think you can win, you feel like you're not supposed to beat these guys, like it's going to be bad for the tournament."

However, Querrey didn't show too much deference in his first-round match this year in San Jose, the same city where he made his ATP-level debut in 2006 as an amateur. He dispatched Goldstein 6-2, 6-1 in 50 minutes and showered before his news conference, only to find he'd forgotten to bring warm-up pants to the arena. The extra shorts in his bag weren't fit for public consumption, so he emerged from the locker room with a towel around his waist and asked someone to find Doyle.

A pair of borrowed pants hit Querrey above the ankle, but so what? He was likewise breezy about the mild hazing he got at the Australian Open from James Blake, who noticed a toe peeking through the top of Querrey's shoe before a match and suggested he change. Querrey said the alleged hole was a mere pinprick. No big deal.

Blake isn't second-guessing much about Querrey's approach. The current world No. 6 got a taste of possible things to come last year at Indian Wells. Querrey pasted him 6-1 in the opening set of their second-round match before Blake found his footing.

"So many kids take it like it's the end of the world if they lose one match, and he's not like that," Blake said. "He's happy to be playing and doing his best and not really in awe of anything that's going on, which is going to help him out in the long run. His potential combined with that attitude is going to take him a long way."

Querrey's formative years were atypical for today's top player. He played team sports and didn't settle on tennis until his early teens. He was an accomplished junior player but played sparingly outside the country. He lived at home and graduated from a public high school in Thousand Oaks, Calif.

"They look after him but they don't hover," Teltscher said. "They've made a lot of good decisions, done all the right things."

"The sky's the limit for Sam," Teltscher said. "I don't know if he can play with the top players day in and day out yet, but on any given day, he can beat anybody. He's a deceptively good mover who's very smart, sees the court tremendously well.

"But the best thing about him is that if he becomes No. 1 in the world, he'll be the same guy he was two years ago."