PALMA DE MALLORCA, Balearic Islands -- The King of Clay
ruled in this oddest of matches between the two best players in
tennis.

Rafael Nadal beat Roger Federer 7-5, 4-6, 7-6 (10) in an
exhibition Wednesday on a half-grass, half-clay court when the
top-ranked Swiss failed to reach a forehand that took a funny
bounce across the green side. 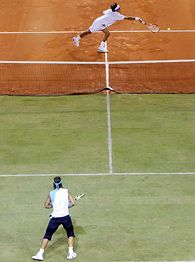 "We're used to playing long, hard games with a lot of tension
involved," Federer said. "So it's fun to play on this half-grass,
half-clay surface."

Nadal came into the match with a record 72 straight wins on
clay. Federer hasn't lost on grass in four years -- a 48-match run
that includes four straight Wimbledon titles.

"It was a long match, with many changes of pace and with little
time to adapt," Nadal said. "My feet are suffering as a price of
having to adapt to the grass."

Federer was leading 4-1 in the tiebreaker before Nadal rallied.
After the Spaniard double-faulted while ahead 6-5, the players
traded match points. Nadal then hit three of the final four winners
from the clay side before a sellout crowd of about 7,000.

The grass caused some tricky bounces, especially as the match
progressed. But both players showed little difficulty in switching
surfaces, as they changed shoes at changeovers.

The grounds crew on Wednesday morning had to rip up and relay
the grass court, which cost $1.63 million and had taken 19 days to
prepare.

After the players split the first two sets, the jokes dissipated
and both players went for the win. Nadal displayed his trademark
fist-pump for the first time after Federer's forehand landed long
on the clay for a 4-3 lead. Both players held serve to force the
tiebreaker, with Nadal dominating the baseline and Federer the net.

Nadal, who has won three straight titles at Monte Carlo and
Barcelona, held a 5-0 lead over Federer on clay. Federer is 1-0
against the Spaniard on grass. Nadal leads the series with Federer
7-3.

Nadal, serving from clay to start, won the first point of the
match after a rally of groundstrokes ended with Federer hitting his
forehand into the net. Another Federer shot into the net, a
backhand, gave the Spaniard the first game.

Nadal broke first in the fourth game on grass then watched
Federer net a forehand as the Spaniard held from the clay for a 4-1
lead. Federer rallied to 4-4 after a break of his own before Nadal
lashed a crosscourt forehand winner for a 5-4 advantage before
breaking Federer again in the 12th game for the set.

Federer bounced back in the second, breaking Nadal on his second
try from the green side. Federer's one break while returning on
grass was enough for the 10-time Grand Slam champion to prevail in
the second.

Both players were eager to do this again next year.