BRUSSELS, Belgium -- Kim Clijsters ended her tennis career
Sunday, cutting short plans to retire at the end of the season
because of chronic injuries. 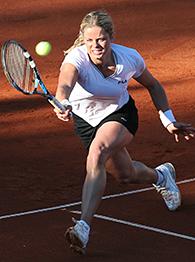 
Clijsters is now ranked No. 4. She lost in straight sets to
Ukrainian qualifier Julia Vakulenko on Thursday in her final match,
failing to retain her title in Warsaw, Poland.


"It has been more than fun, but the rackets are being hung
up," she said. "To retire before the age of 24, it is very young
-- but it was so beautiful. I would have been able to continue for a
few months and to take part in the four most lucrative tournaments
[three Grand Slams and the Masters].


"Money is important, but not the most important thing in my
life. Health and private happiness are so much more important."