It was an unfamiliar sight. Disconcerting, for some. There was Roger Federer, his head down, slouching, racket bag hung over his shoulder, gingerly strolling off the court  a loser.

This was the scene last week at the Rome Masters when the world No. 1 was sent packing by 53rd-ranked Filippo Volandri.

It marked the fourth straight tournament Federer failed to win, his longest drought since claiming the top ranking 172 weeks ago. So it raises the question: What exactly is wrong with Roger Federer?

Having won three Grand Slam titles in 2006 for the second time in three seasons, Federer ended the year on a 29-match win streak, one that grew to 41 after titles in Australia and Dubai to start the '07 campaign. And then, suddenly, the seemingly unflappable Swiss just couldn't get it together.

ESPN tennis analyst Patrick McEnroe says there's reason for concern. "To fire [coach] Tony Roche was a major statement. Something was wrong and something had to be done," said McEnroe. "His loss to Volandri was shocking. We all know he can't maintain the level he's played at forever, but that match was an indication of something more." 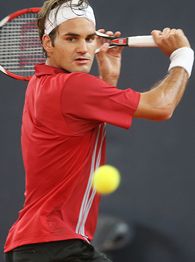 Loss of confidence, perhaps? Is the field catching up?

McEnroe contends it's a combination. "He's been untouchable for three and a half years. No one on the planet could even taste the prospect of challenging him as the No. 1 player in the world. But now you have Rafael Nadal, who is playing even more aggressively than we've seen in the past, and youngsters like Novak Djokovic are moving up the ranks, and quickly," he said. "And for the first time, it looks like Federer is aware he is vulnerable."

Since seizing the No. 1 world ranking from Andy Roddick on Feb. 2, 2004, Federer has been a man apart. His 2006 season was one for the ages. It looked like his reign would last forever. Federer's 12 titles last year were the most since Thomas Muster in 1995. He became the first player in the Open era to win at least 10 titles three consecutive years, and his 92 match wins were the most since Ivan Lendl compiled 106 in 1982.

After a promising start this season, Federer received his first blow at Indian Wells in March. He endured a shocking 7-5, 6-2 loss to Guillermo Canas, a player who wasn't far removed from a 15-month suspension for doping.

Most, though, gave Federer a mulligan after that showing. He can't win every match. But even the most brilliant prognosticators couldn't have foreseen what was coming two weeks later. At Key Biscayne, Federer lost to, you guessed it, Canas again, a result that raised plenty of eyebrows. The Swiss had been defeated just once at these two Masters Series events in the last two years, and now he had lost twice in two weeks to an opponent who in recent months has spent more time appealing his suspension than he has on the court.

Federer had set the bar so high that his back-to-back losses -- to the same player -- were almost inconceivable. This time, though, he received no amnesty.

McEnroe didn't expect the second loss to Canas. "Definitely not to the same player in a venue he is well acquainted with," he said. "Federer's been relatively unchallenged for a while now, and he's rarely looked like he hasn't been in control in every aspect of a match."

And perhaps it was Canas' encore performance in Miami that set the tone for Federer before the clay-court season began.

He played well in Monte Carlo, reaching the final before bowing out to the king of clay, Rafael Nadal. But it was his drubbing by Volandri, a journeyman with two career titles (45 fewer than Federer), that left McEnroe wondering if this was an ominous sign. "I'm not going to count Federer out just yet [from a deep run at Roland Garros], but I am worried. When you lose to a middle-of-the-road clay-courter, he has to know something isn't right." Added McEnroe: "It was his demeanor and attitude that caught my attention, not just the loss itself."

There are myriad explanations for Federer's recent slump: fatigue, pressure and clay courts, to name a few. But is there any tangible evidence that suggests something is off?

"Timing," said McEnroe. "Federer is a player that depends on perfect timing. He has the ability to go on offense in the blink of an eye. When it's off, as it was versus Volandri, he'll miss shots. Federer is one of the greatest strikers we've seen and he's a graceful mover. But that has not been the case lately."

And now, Federer's recent travails have left the pundits asking: Is the gap between Federer and the field closing? "We're not going to assume he will win 90 matches every year, but I expect Federer to remain on top for another two years," McEnroe said. "He's still only 25 years old. Maintaining that kind of domination over an extended period of time is not an easy chore."

As the French Open nears, Federer has time to collect himself. And his goal of capturing the lone major that eludes him is not completely unreasonable. He has the requisite skills to play on clay. Since 2005, Federer is a respectable 39-7 on dirt, and only two of those losses came to players other than Nadal.

"He's the second-best player in the world on clay," McEnroe said. "He's had favorable results and he's worked to play on a surface that's not his most comfortable. Do I expect Federer to win the French? No, but before we panic, let's see if he can snap out of this funk and make a run back to the final."

Capturing the French would place Federer in rare company. Only five players own all four Grand Slam titles, and by matching that feat Federer would only escalate the greatest-player-of-all-time debate. Federer is already in that elite circle, but few are willing to award him the crown until he can tackle the one major his résumé lacks.

Said McEnroe, "He's clearly in that company, no question, but until he wins the French, he is not the greatest to ever compete. It would be a remarkable feat, one so many wanted but were unable to accomplish."

The success enjoyed by Federer -- who has hovered over the rest of the field for so long -- doesn't come without scrutiny. That is the peril of being No. 1; each and every pratfall is emphasized and the longer a slump lingers, the more taxing, mentally and physically, it becomes.

So while the world No. 1 has looked mortal lately, there's plenty of time to salvage a less-than-stellar clay-court season. The French Open is just days away and a few deep breaths and a couple of convincing early-round wins at Roland Garros could be the perfect tonic on a run toward cementing his legendary status.

Matt Wilansky, a general editor at ESPN.com, contributes frequently to the tennis page.