HAMBURG, Germany -- Roger Federer had the perfect response
to questions about his status as the world's top-ranked player -- he
ended Rafael Nadal's 81-match winning streak on clay. 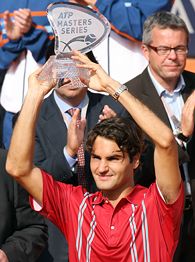 Federer beat Nadal 2-6, 6-2, 6-0 in the final of the Hamburg
Masters on Sunday to win his first clay-court title in two years
and snap out of a slump during which he failed to win a title in
four events. It was his worst run since he became No. 1 in February
2004.

Federer also gave himself a major boost one week before the
French Open, the second major of the year and the only Grand Slam
he hasn't won.

"It was an incredible performance from my side," Federer said.
"I had a great day, it's nice to be playing well again. It's my
first title on clay in a couple of years."

Nadal, who had never lost to Federer on clay in five previous
matches and leads the overall series 7-4, was impressed.

"He is unbelievable," the Spaniard said.

Nadal, ranked No. 2 in the world behind Federer, had been
unbeaten on the surface since April 2005, a run that included 13
titles.