LOS ANGELES -- Three-time major champion Lindsay Davenport
is considering a comeback after being off the pro tour since the
end of last year while awaiting the birth of her first child. 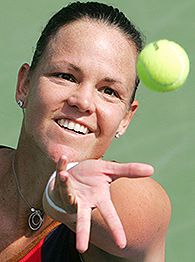 "I hope so," she said Tuesday on a conference call from her
Laguna Beach home. "I haven't made any final decisions. It's a
small goal I'm working towards."

A comeback is alluring in part because Davenport would like to
play in next year's Beijing Olympics. She won a gold medal in
singles at the 1996 Atlanta Games.

"The thing that intrigues me is the Olympics and trying to go
back as a mother," she said.

She'll play her first match since September on Saturday night as
a member of the Sacramento Capitals of World TeamTennis.

"I'm feeling great. All of a sudden, things have healed really
quickly," she said. "It's been so much fun preparing. I've been
hitting with my husband."

Davenport will play doubles with Elena Likhovtseva and mixed
doubles with Mark Knowles against the Newport Beach Breakers. Also
on the Capitals, coached by Wayne Bryan, are Sam Warburg and
Michelle Larcher de Brito.

The match in Sacramento will be Davenport's only appearance
because the league's regular season ends July 25.

"I looked at it as really a kind of fun challenge," she said.
"To see if I could come back so quickly and give me a kick in the
pants and see if I could be active."

Her son was born three weeks early due to unspecified
complications, although he is healthy. She said Jagger's name "has
nothing to do with the Rolling Stones"; she and husband Jonathan
Leach just wanted an unusual name.

Davenport plans to bring her son, husband, nanny and other
family members to Sacramento.

"I'm hoping he'll bring me even more joy on the road and more
fun," she said. "The challenge for me is about balancing
everything. I totally understand the working mom's guilt. If I go
practice, I feel bad."

"He thinks it's great," she said. "He's totally encouraging
me to do whatever I want."

Davenport, the world's former No. 1 player, doesn't foresee her
son on the pro tennis tour. Her father-in-law is former Southern
California tennis coach Dick Leach and her brother-in-law Rick
played on the ATP Tour.

"It's probably in his best interest to not follow the tennis
gene," she said. "Hopefully, he'll be involved in some kind of
sports."