BRISTOL, Conn. -- Bud Collins, an institution in written and broadcast tennis coverage for more than 40 years, has joined ESPN. 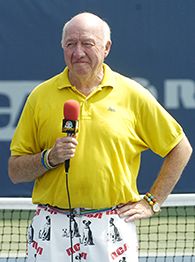 A member of the International Tennis Hall of Fame since 1994, Collins, known for his colorful wardrobe and unique nicknames for players, will contribute to ESPN2's coverage of Grand Slam events -- the Australian Open, the French Open and Wimbledon -- beginning in 2008. He also will report for SportsCenter, ESPNEWS and ESPN Radio from the U.S. Open starting this year.

"For more than 40 years, Bud has had a courtside seat at every meaningful event in the sport. He knows everyone, and everyone knows him," Williamson said. "When the opportunity presented itself to add Bud to our tennis team, it was an easy decision to quickly reach out to him -- his perspective, great storytelling and inimitable style will help further distinguish our Grand Slam coverage on ESPN2 and on SportsCenter."

The move reunites Collins with Dick Enberg, his longtime on-air partner covering tennis for NBC. Enberg worked with Collins for 20 years at NBC, including the "Breakfast at Wimbledon" live broadcasts starting in 1979. Both men said they are looking forward to working together again.

"No one through the decades has been more important to the coverage of tennis than Bud," Enberg said. "He is not just a historian -- literally and figuratively the encyclopedia of tennis -- but he has served as a docent. He has been immensely generous, sharing his incredible knowledge with anyone who has an interest in the sport."

"I'm stimulated and extremely pleased to be joining ESPN's world-wide tennis coverage, and anxious to get started," Collins said. "I am also delighted to be reunited with my long-time partner, Dick Enberg."

A 1999 recipient of the Red Smith Award for major contributions to sports journalism, Collins has worked in the media since 1963, when he began his newspaper career at The Boston Globe and his TV career at public television station WGBH in Boston. He covered tennis at CBS between 1968 and 1972, and at NBC from 1972 through 2007.

A graduate of Baldwin-Wallace College in his hometown of Berea, Ohio, Collins coached tennis from 1959 through 1963 at Brandeis University in Waltham, Mass. At the Globe, he first covered boxing and also reported on the Vietnam War before becoming the newspaper's tennis writer. He covered most of Muhammad Ali's fights, including the "Rumble in the Jungle" against George Foreman
in 1974.

Collins, 78, has written several books, including "The Education of a Tennis Player" with Rod Laver in 1971; "Evonne! On the Move with Evonne Goolagong Cawley" in 1974; a memoir, "My Life with the Pros," in 1989; and several editions of "Bud Collins' Tennis Encyclopedia.
"

He won the U.S. Indoor mixed doubles championship with Janet Hopps in 1961 and was a finalist in the French Senior doubles with Jack Crawford in 1975.