MONTREAL -- Novak Djokovic called his Rogers Cup semifinal
victory over Rafael Nadal one of the biggest victories of his
career.

It turns out he was only getting warmed up. 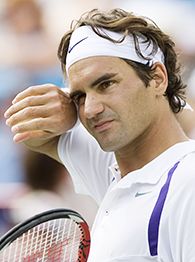 Djokovic upset world No. 1 Roger Federer 7-6 (2), 2-6, 7-6 (2)
Sunday to win the $2.45 million Masters Series event, solidifying
himself as a serious contender to win the U.S. Open beginning later this month in New York.

"It's a dream come true to win such a strong tournament as this
and to win against probably the best player ever in the sport," Djokovic said.

It was third-seeded Djokovic's fourth tournament win this year
and his first win in five career matches against Federer, whose
16-match Rogers Cup winning streak ended. The Swiss star won the
tournament in 2004 and 2006, and sat out in 2005 with a foot
injury.

Federer described his loss to Djokovic as "insignificant" overall.

"The goal was to win Wimbledon," Federer said. "Done that. Then, try to stay No. 1 in the world. It would have helped to have won today but you can't have it all.

"Looking at the U.S. Open, and down the road, the Masters,
there's still a long way to go. I can't start being disappointed about just one match."

With wins over Andy Roddick and No. 2 Nadal in his previous
rounds, Djokovic also became the first player to beat the world's
top three players in the same tournament since Boris Becker
defeated No. 3 Michael Stich, No. 1 Pete Sampras and No. 2 Goran
Ivanisevic in succession in 1994 in Stockholm.

"It was very important at the start of the year to perform
well in the most important tournaments, the major ones, which I
did," Djokovic said. "I showed it again. I showed my quality and I
deserve to be here right now."

Federer broke Djokovic to finish off the second set but the
Serbian standout broke back to open the third. Federer rallied to
tie it at 4.