MASON, Ohio -- Roger Federer raised both arms triumphantly
when his ace finished it off. After years of having everyone else's
number, he had a special one of his own. 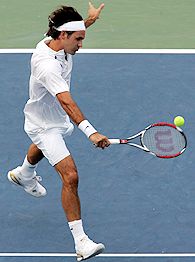 At age 26, he became the fifth-youngest player to reach 50, and
only the ninth overall in the Open Era -- since 1968 -- to win so
many tournaments.

"It's not a goal I set for myself in my career, but it's
definitely a nice number to get to, especially in terms of
titles," Federer said. "It's really a lot, you know, so it's
great."

There could be a lot more to come. Given the way he played on
Sunday, nobody would be surprised if the U.S. Opens winds up being
51. The higher the stakes, the better he plays.

Federer struggled early in the week and needed a pair of
three-set victories to reach the title match against Blake, a
27-year-old American playing in only his second Masters Series
championship.

Once Federer got there, he was vintage.

"Just about everything he does is pretty impressive," Blake
said. "So, yeah, 50 titles at any age is impressive. Fifty titles
at 26 is incredible."

Federer almost got the noteworthy win a week earlier in
Montreal, where he lost the title match to Novak Djokovic in a
third-set tiebreaker. This time, he was determined to get it.

Dressed in all-white on a muggy, 92-degree afternoon, Federer
extended his mastery of Blake -- and all Americans, for that matter.