It had been an arduous U.S. Open for Nikolay Davydenko. Playing his 25th tournament of 2007, the Russian had spent 12 hours and 31 minutes on the court in six matches. He'd matched his effort of the previous year, reaching the semis where he'd again lost to eventual champion Roger Federer. Having lost that match on a Saturday, Davydenko next did something you'd only expect from a tennis player.

He boarded a plane and flew 6,834 miles to a tournament in Beijing.

American sports fans might well think that the U.S. Open, the final Grand Slam of the year, marks the conclusion of the tennis season. 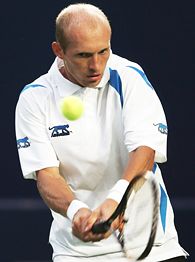 In addition to their prestigious and lucrative year-end championships -- which many players are still jockeying to qualify for -- the ATP and WTA tours between them have 30 more tournaments scheduled for the balance of the year. Add to that the various Challenger and Futures events, and it's clear there's no end to this sport.

Should there be? Here are three ways to regard the current cavalcade of tournaments.

Season? What season?
The notion of a season is a concept typically applied to team sports where players are paid predetermined salaries and typically know they'll be part of the next year's team. Tennis is global and individual.

"A-Rod [Alex Rodriguez] can go 0-for-29 and still make his salary," said long-standing WTA pro Rennae Stubbs. "But tennis doesn't work that way. No one's guaranteeing our salaries, no one's giving us a nickel unless we earn it. And if there are chances to keep earning a living and winning matches, would you pass that up?"

Tennis players are solo entrepreneurs, fully receptive to the opportunities created by an increasingly global market. When she was playing actively, Lindsay Davenport spoke frequently of how she yearned for a normal life. But nothing stopped her from entering a tournament in Bali each of the last two weeks. Nor did she enter the tournament at gunpoint.

Financial rewards extend far beyond prize money. Appearance fees are a fixture at the vast majority of ATP events. Though they're technically illegal on the WTA Tour, there invariably seem to be other financial factors that motivate players to surface at a vast range of events. Endorsement agreements with racket, clothing and other corporations, for example, have long aided Tokyo's ability to attract quality players from both genders to its event next month.

We who write stories might yearn for the narrative flow of a tennis season that for us Americans conveniently ends when tournaments cease on our soil. But if there are willing sponsors and thousands of fans willing to support events in such spots as Vienna, Bangkok and Tashkent, Uzbekistan and players hankering for ranking points and prize money, so be it.

"You would not believe how much passion there is for tennis in these places," ESPN analyst Luke Jensen said. Only if your compass is set on your own spot of the globe are these places necessarily far-flung.

Hail to the never-ending treadmill
As you might expect from a fan of American team sports, John McEnroe speaks frequently about the need for a shorter, controlled season and the elimination of more than a few tournaments. He's also got a bit of selective amnesia. In 1978 -- the year he turned pro -- 19-year-old McEnroe was ranked No. 19 in the world in July. That fall, he took full advantage of a vast slate of post-U.S. Open tournaments to win titles in Hartford, Conn., San Francisco, Stockholm and London, victories that rapidly aided his ascent. Stockholm was where he earned his first win over Bjorn Borg. By the end of '78 he was No. 4 in the world, qualifying for the prestigious and lucrative season-ending Masters tournament.

"It's like a treadmill," former pro David Wheaton said. "You better keep running or else you're going to fly off the back end. And there's only so much space. There are always new players, always people competing, so you've got to be looking to get your ranking moving to help your positioning for the next year. Tennis is very fair that way. If you lose, you go home. But you can't afford to stay home -- not so much for money, but for that ranking."

For lower-ranked players, these next 10 weeks are even more precious. Said Paul Goldstein, who for much of his career has occupied a ranking between 60 and 100, "It's a good opportunity to be in good shape for the next year. The points I can get in the fall at either ATP events or Challengers can help determine if I get into the main draw of the year's first Slam in Australia. That's huge."

So besides the impact on salary, what's happening this fall can impact the composition of a tournament roster.

Pete Sampras trekked through Europe throughout the fall of 1998 in hopes of becoming the first player in tennis history to have finished the year ranked No. 1 six straight times. "Just about killed me, but it was worth it," he said years later.

The points I can get in the fall at either ATP events or Challengers can help determine if I get into the main draw of the year's first Slam in Australia. That's huge.

In the fall of 1982, McEnroe had not won a title since January. Starting that September, he won four titles on four continents, an effort that helped him finish the year ranked No. 1 in the world.

But for all the inevitability of a lengthy tennis season, many agree that the sport is hurt by a calendar that lasts too long. In the party of sports, tennis is the guest that never leaves.

"You could debate whether the tour would be better served if the year ended in October," Wheaton said. "There'd be fewer injuries, a good chance for more people to be fresh come January. But then there's the argument, how can you stop people from working?"

According to Stubbs, "You might go nuts being indoors for weeks on end, but playing indoors is fantastic -- no wind, no sun, no worries about weather. Just about every pro really likes playing in these conditions. Even more, we like to play, we like to compete, we like to win. It's what we've been doing our whole lives.

"Would I like a longer offseason? I suppose. But unless the entire world of tennis agrees there won't be any points at stake during the fall, lots of us are going to keep playing tournaments."

Joel Drucker is based in Oakland, Calif., and writes for Tennis Magazine and The Tennis Channel.