Maria Sharapova's 2007 woes boil down to a simple question: Has she merely been hindered by a yearlong right shoulder injury or have her limitations been conclusively revealed?

At the four Grand Slams this year, it's been most unsettling not so much to see Sharapova lose as much as be obliterated -- and do so in increasingly earlier rounds. In the Australian Open final she went down to Serena Williams, 6-1, 6-2. At Roland Garros, Ana Ivanovic pummeled her 6-2, 6-1 in the semis. At Wimbledon, Venus Wiliams whipped the Russian 6-1, 6-3 in the fourth round. At least those were losses to elite players. Then, launching her title defense at the U.S. Open, Sharapova played exceptionally poor tennis, losing 6-4, 1-6, 6-2 in the third round to 32nd-ranked Agnieszka Radwanksa. 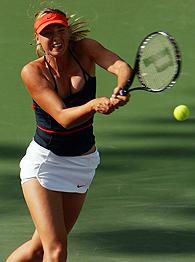 In one sense, it's easy to attribute Sharapova's lackluster Slam results to the right shoulder injury that's severely handicapped her serve. Once one of the best deliveries on tour, Sharapova's serve is the catalyst for her entire game. Power and placement put her immediately in control of the vast majority of her service points -- a particularly critical step for a player whose sporadic court coverage skills make it vital for her to dictate play with exceptional haste. Moreover, when Sharapova holds serve briskly, she's mentally liberated when returning, swings more freely and threatens her opponents.

But this year, backed on her heels by repeated returns, Sharapova's been forced to scramble. Unequipped to mix up paces and spins, scarcely nimble transitioning from defense to offense, Sharapova in her Slam losses has looked exceptionally unmasked.

"Right now she doesn't have the confidence," said Robert Lansdorp, Sharapova's former coach. "I used to always know that Maria would find a way to turn things around. It's completely different now. That girl grew up with me. The game I taught her isn't there."

Through her handlers, Sharapova declined to speak for this article.

Hoping to heal her right shoulder, Sharapova pulled out of this week's event in Stuttgart, Germany. Though on her Web site she says she hopes to play more this year in the lead-up to the season-ending championships, it wouldn't be surprising to see Sharapova cease all competition and work to get herself healthy for 2008.

"Give her a break for this year," said former WTA Tour pro and Tennis Channel analyst Elise Burgin. "This is the first time she's been confronted with significant injuries. She's a smart competitor."

And yet, to witness Sharapova's father and coach, Yuri, watch one of her matches, you'd hardly imagine a long-term vision. Yuri Sharapov is a driven man who treats the ups and downs of each of his daughter's matches as if they were life and death struggles.

But given the long journey this man took from Chernoybl and Siberia to help his daughter (and family), his bunkerlike focus makes a certain kind of sense. After all, it has been only six years since the girl launched her pro career – a long spell for a young athlete, but not too much time for an adult.

Over the course of an athlete's life, particularly those that reach a high level of success, perhaps there'll be a slide. But you're going to see Maria coming back with a thunder.

So the schism between Sharapova's long-term ambitions and Yuri's short-term ferocity can create painful tensions. Certainly it hasn't helped in the coaching department, where Yuri's anger was the trigger point for Lansdorp's exit following her loss in the semis of the 2005 U.S. Open. Yet the prominent coach, who had worked with Sharapova from ages 11 to 18, said last week that, "Yuri calls me all the time. I told him to shorten her service motion. I know I can straighten her out in a month -- her head, her serve, her mentality. But now I'd go first, 'Hey listen lady, send me a check.' But I like Maria. I like Yuri, too."

But of late it wasn't Lansdorp who got the call. Instead it was the first notable tennis coach Yuri met when he came to America, Nick Bollettieri. It was at Bollettieri's where the pint-sized Maria lived as a 10-year-old, building her game through endless hours of ball smacking. Reached last week at his academy in Bradenton, Fla., Bollettieri noted that Sharapova was working out on the grounds with Yuri's co-coach, former Lansdorp student Michael Joyce.

Though Bollettieri has no official role in the Sharapova camp, he also knows there's no need for him to be hands-on in the manner of Lansdorp.

"I'm not the coach, no way," Bollettieri said. "But let me tell you this: Over the course of an athlete's life, particularly those that reach a high level of success, perhaps there'll be a slide. But you're going to see Maria coming back with a thunder."

As Sharapova said last month following her U.S. Open loss, "I have a whole future ahead of me. I'm not going to throw myself a pity party here.  You never know when God's going to bring down those gifts. So I'm waiting for those Christmas gifts."

Perhaps one might be a bit less drama from Yuri. His daughter has put in the time to be great. As the world knows, her grunt is grand. Now if he could only let her breathe a little bit more too.

Joel Drucker is based in Oakland, Calif., and writes about tennis for Tennis Magazine and The Tennis Channel.