On this autumn afternoon, Michael Chang was animated, in large part even more enthused to discuss others than himself. Yet
if you've given your heart and soul to an individual sport like tennis, a man can't help but reveal what makes him tick -- and also share
more than a few eye-opening lessons.

Nearly four years after retiring at the end of 2003, Chang returned to pro tennis in a surprising way this past March -- both as a coach and, even more unexpected, on the WTA Tour. Starting at the Pacific Life Open in Indian Wells, Calif., Chang, began working with Chinese player Peng Shuai. Traveling with Peng throughout much of the spring and summer, Chang tried to impart the wisdom that had taken him to a career-high ranking of No. 2 in the world. 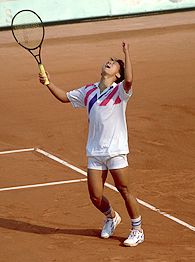 "I was always really strict on myself about doing everything possible to prepare for competition," said Chang. "[My brother and coach] Carl and I had it down to a science -- stretching, vitamins, nutrition. If we knew what time I was playing, I knew exactly what I had to do for practice, food -- you name it, we weren't going to leave any stone unturned."

But Peng wasn't ready to merely replicate her coach's style. Her eating habits differed, as did her philosophy to preparation. Some of Chang's ideas were useful, but he also admits that "I had to recognize that everybody is different. It was very humbling. She's more laid back than me, and to be a great coach, you have to find out what works best for your player."

Yet of course there is much that Chang himself brings to the table. While Peng's ability to powerfully blast the ball with two hands on both sides is quite impressive, Chang's worked to instill his 21-year-old charge with two of his great strengths: court sense and confidence.

"I didn't have the ability to blow people off the court, so I needed my legs, my preparation and the ability to think on my feet," Chang said. "I see tendencies, I see body language. I want Peng to look at a match in a big picture way."

As you might expect from two players with a strong affinity for China, the Chang-Peng pairing's best result this year came last month in Beijing, when Peng beat former world No. 1s Martina Hingis and Amelie Mauresmo on her way to the semis.

"That's the kind of week that shifts an attitude from 'I hope I can do well' to 'I can play and I can beat the best,'" said Chang. "I want her to get physically strong enough so she can handle the day- in and day-out grind." Chang's own devotion to physical fitness was a vital element in his own mental make-up. As Andre Agassi said, "Michael had a lot of guts. No freebies when you played him."

Chang's work with Peng is only part of a large-scale investment he's making of time and money to help tennis in China. During his playing days, Chang was an icon in his ancestral homeland, his popularity ranking on a scale with Michael Jordan as he endorsed not just tennis-related equipment and events but even shampoo, financial services and a host of consumer products. A keen motivator to athletes and people all over China, Chang's worldwide success was likely one reason Beijing was awarded the 2008 Summer Olympics.

"Seeing the Olympics come to China made me want to get more involved," said Chang. In a nation where the Olympics has always been extremely popular, tennis' cause is also aided by the presence of a defending gold medal doubles team, 2004 women's champions Li Ting and Sun Tiantian.

The focus of Chang's effort is Mission Hills Golf Club, a venue with 12 golf courses and 51 tennis courts located in Shenzen, China (30 minutes from Hong Kong).

"The coaching hasn't been that good in China," said Chang. "And it's not easy to just hop on a court and play like you can in the U.S. I'm going to spend a few months a year there, looking all over the country for hungry players and working at the academy. I want to develop boys and girls not just as tennis players, but as people."

Though Chang was a member of the USTA's High Performance committee for several years, a group charged with aiding ambitious American juniors, he believes, "Tennis is very established in the U.S. China is a little further behind, so maybe here's a place where I can make even more of a difference." His academy is set to open in 2008.

2008 could also be big for Chang on another front. His name is on the current ballot for induction into the International Tennis Hall of Fame. His achievements were significant, most notably in 1989 when he became the first American male in 34 years to win the French Open -- and, at 17, the youngest man to ever earn a Grand Slam singles title.

"He was the first," said Jim Courier. "He was the one who showed we could win these big events."

The 1989 French Open -- a victory he always notes took place at the same time as the Tiananmen Square protests -- was but one of Chang's 34 career singles titles. Moreover, Chang left a legacy of utter professionalism. Much like Lleyton Hewitt or Justine Henin today, he was determined to leave nothing on the table in his quest to squeeze everything he could from pro tennis.

"It's not for me to say whether I should be in the Hall of Fame or not," Chang said. "It's an honor to be nominated. I was fortunate to play and compete with so many tough players -- Connors, McEnroe, Lendl, and of course Pete, Andre and Jim, and even Federer and Roddick. But in the last year, back on the tour, it's been very gratifying to hear people come up and say things like 'thank you for all the enjoyment you gave me watching you play.' To impact people like that gives me chills. I never realized that until last year.

"Sports is about bringing people together, so to have been part of that makes very grateful."

Joel Drucker is based in Oakland, Calif., and writes about tennis for Tennis Magazine and The Tennis Channel.