VILLANOVA, Pa. -- Two of the biggest cannon arms in the game, Andy Roddick and John Isner, were warming up for a World Team Tennis exhibition doubles match on a speedy carpeted court Wednesday night when Lindsay Davenport saw something that made her nervous.

Davenport, sitting on the bench with legendary rocker Elton John at the annual AIDS charity event the musician throws with Billie Jean King, walked over to the boards at the baseline and beckoned to a young woman with a stroller who was sitting in the front row. 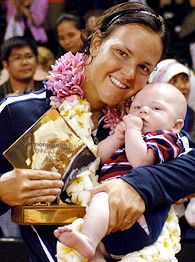 Moments later, the nanny positioned herself several rows higher and explained that Davenport wanted her 4-month-old baby out of harm's way when Roddick and Isner's untouchable serves whistled off the court into the crowd, which they did with some regularity after the match began.

That's thinking like a true tennis mom -- a mom who, to her own and many other people's surprise, has returned to play the sport she excelled at for so long.

Davenport's odyssey through the birth of her son Jagger last June and her comeback this fall has changed her in a few ways. Coupled with some other second acts in the women's game over the last few years, maybe it should teach us a lesson. Sometimes careers, like pregnancies, zig-zag outside the lines and don't follow predictable trajectories.

"Everyone wants to know, OK, this is the plan, this is what's going to happen, this is how it's going to be," said the 31-year-old Davenport, who won a WTA event in Bali -- her first singles tournament in a year -- last month and reached the semis in Beijing the following week. "You kind of never do. You just have to play it by ear and see how everything ends up lining up."

Little Jagger was a big hit at the WTT Smash Hits gala, attracting delighted cooing and ah-ing wherever he went. "Ooooh my God!" Davenport's former colleague Anna Kournikova exclaimed when she saw him, clapping her hands to her famous face and bending over for a better look.

Later in the evening, Jagger blissfully slept through his mother's singles match against young U.S. prospect Madison Brengle, shaded from the arena lights by a puffy blue blanket.

If you didn't know Davenport had been away, you wouldn't know. She's got the same clean, hard groundstrokes and loose, shoulder-rolling way of shrugging away a mishit. She says she feels great -- better, in fact, than she did her last 18 months on the women's tour, when back problems increasingly hampered her ability to play at the highest level.

Davenport stayed fit through her pregnancy by jogging, lifting weights and working out in the pool, but said she had no desire to play tennis again until she was into her seventh month. "Nice timing," she said, laughing at her own fickleness. "I wish I had thought I would come back. I didn't, and I didn't practice."

Everything went smoothly until the 32-week mark, when routine tests showed that the umbilical cord was wrapped around the baby's neck -- twice. The next month was high-stress for Davenport and her husband, investment banker and former pro Jon Leach. She went to the hospital for monitoring three times a week, and her doctor instructed her to check on the baby every three hours by gently pressing her own belly to get him to kick back.

"The doctors were pretty positive and upbeat about it, but I had my moments," Davenport said. She decided to defy superstition and organize her new nursery, but at one point, as she was folding baby clothes with her mother, Davenport blurted out her worst fear. "What if this is for nothing?" she said.

No doubt that an elite athlete's physical and mental strength came in handy there. "You have to snap out of it," Davenport said of her anxiety, and she did.

When her doctor decided Jagger needed to be delivered by Caesarian section about three weeks early on June 10, Davenport called two people -- her mother and her old doubles partner and dear friend, Corina Morariu. Worrisome as the last weeks of the pregnancy had been, the birth was normal and Davenport resumed exercising two weeks later.

"My doctor told me to be careful what I say, because I might inspire women to come back too soon," Davenport said. "They usually recommend six to eight weeks. I always tell people I had permission.''

What's next? Davenport has entered a tournament in Quebec City the last week of October, and said she intends to start the 2008 season in Australia if she's still feeling good.

She never requested that her name be removed from the WTA rankings and currently sits at No. 125. But her agent, Tony Godsick, talked her into filling out the paperwork that gave her a special ranking back in February, when Davenport was convinced she would never play again.

If Davenport chooses to play the Australian Open in January, she'll go in as an unseeded No. 12 -- her position after her last event in 2006 -- and like Serena Williams last year, would have to be considered a dangerous floater.

Jagger has his dad's blue eyes and his mom's infant baldness and for the moment, he's a placid, happy traveler. Davenport knows that could change drastically when he becomes a toddler. "We're taking advantage of this time until he gets mobile," she said. "So far it's been manageable.

"I didn't come back because I was unhappy. Everything seems really natural. There's not a lot of free time, that's for sure. But there's no pressure. It's all a bonus."

New phase: Roddick and Morariu hammed it up during a mixed doubles match at the WTT benefit. At one point, they pretended to argue. Roddick stalked off in mock fury, then wheeled and yelled out: "I can't stay mad at you!"

We understand why. Morariu, 29, is one of the most gracious, graceful performers in the game and her low-key, unannounced exit was typical of her modest personality. Morariu retired after this year's U.S. Open and said there will be no reversal of that decision.

"It's been a long time coming," said Morariu, a leukemia survivor who battled back to play doubles and reached the Australian Open final two years ago with Davenport. "Having shoulder surgery and having to shelve my singles career was tough on me. But I feel great and I'm thankful for that. I have a lot of passions in life and I'm capable of doing other things."

Morariu has been doing some television commentary and also serves as a spokesperson for the Leukemia and Lymphoma Society. She lives close to Davenport in Southern California and said Jagger's birth "is like having a new little nephew."

Davenport's re-emergence "is awesome -- great for women's tennis and great for her," Morariu said. "All I want is for her to be happy and she seems to be managing really well."

Long live the King: Elton John, on his good friend Billie Jean King: "I never understood why she didn't coach men. She's a great motivator. I brought her in to talk to my soccer team and she gave a two-hour motivational talk. They were s--- scared by the time she was done."

The pair showed they also have a way of persuading people to open their hearts and wallets, raising $400,000 for AIDS causes at the 15th annual edition of the Smash Hits event.