For a player who's reached the Wimbledon semifinals, ousted Roger Federer on grass and clinched Croatia's first and only Davis Cup title, Mario Ancic's second-round win over James Blake at the Madrid Masters Wednesday seemed to be nothing out of the ordinary. After all, he'd beaten Blake in their last two encounters.

Safe to say, though, the 6-3, 6-4 victory was a little more special than normal. It came a week after yet another comeback following a shoulder injury that sidelined Ancic at the U.S. Open, though paled in comparison to his battle with mononucleosis, which kept the 23-year-old out for six months and might have ended his career. Call it baby steps for the man dubbed "Baby Goran."

"Playing matches, waiting for matches to start, warming up for matches, it's new for me this year," said Ancic, who next faces Paul-Henri Mathieu. "I haven't done much of that at all. You can work as much as you want, but when you come to a tournament, it's a new world." 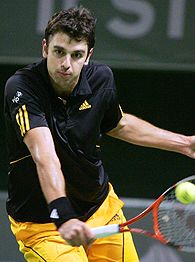 Ancic's appearance at this week's Madrid Masters marks his eighth ATP tournament of 2007, to go along with one eventful Davis Cup tie. At a time when he thought his ranking could have been in the top five, he needed a quarterfinal showing in Stockholm just to rise to 49th.

Last year, only the top-ranked Federer and No. 2 Rafael Nadal had higher win percentages among tour regulars, and Ancic soared to a career-best ranking of seventh following Wimbledon. That's when his bad luck began -- he suffered a knee injury when his foot got caught in a jet ski pedal while vacationing in Croatia and was out for two months, pretty much ending his chances of joining Federer and Nadal at the elite Masters Cup.

"Last year he [would have qualified for] the Masters if he was fit," said Ancic's Swedish coach, Fredrik Rosengren, who guided Magnus Norman to No. 2 in the world and has also worked with countrymen Jonas Bjorkman and Joachim Johansson. "He never talks about that. All the attention and focus is on his everyday work. But it's not easy, because he can't work as hard as he wants."

Though back, Ancic is far from completely healthy. Instead, he says he's about 70 percent, largely the result of a low iron count believed to be linked to the mononucleosis. He can't train as intensely as he used to and needs more recovery time.

Even for the ever-positive Ancic, whom Rosengren says has a work ethic to rival that of the intense Norman, the occasional bout of frustration sets in.

"Sometimes he does get a little frustrated, because he compares himself to what he normally worked," Rosengren said. "I say to him, 'Mario, you work 10 times harder than a Swedish junior and you're still not happy with that.'"

Still, he's lucky to be playing at all. Days before Croatia's February tie in Germany in the opening round of the World Group, Ancic had flu-like symptoms but felt he was well enough to battle Tommy Haas in the opener. A four-set defeat followed, and at one point late on, Ancic said he was so dizzy he completely missed a ball.

No better, Ancic partnered with Ivan Ljubicic in the doubles the next day and went down in straight sets to Michael Kohlmann and Alexander Waske. He was waiting in the locker room to play the fifth and deciding match but wasn't needed because Haas downed Ljubicic to clinch Germany's win.

Had he competed this time, the competition that gave Ancic the biggest boost of his career -- he downed Slovakia's Michal Mertinak in the live fifth match of the 2005 final in Bratislava -- probably would have sealed it. Complications of mono include enlargement of the spleen and mild liver inflammation, while the heart can also become inflamed. Taking part in physical activities is far from advisable.

"That would have been the last match for me, not could have been," Ancic said. "God saved me. The heart problems that I had when I played with mono, that I didn't know yet, that was a big blow."

Without a firm diagnosis, Ancic went to Marseille, France, the week after and had to retire against Andreas Seppi in the first round, trailing 4-0. It was only when he started gearing up for the Pacific Life Open in Indian Wells, Calif., that he sensed this was no flu.

"I went for a walk a little bit, maybe half-hour maximum," he said. "I came back and I slept for four hours. Then I knew something wasn't right. Something was terribly wrong."

That would have been the last match for me, not could have been. God saved me. The heart problems that I had when I played with mono, that I didn't know yet, that was a big blow.

Doctors told him he had mono, and Ancic spent most of the next 10 weeks in bed. He spoke to athletes who dealt with the condition and similar illnesses, including women's No. 1 Justine Henin, and began taking small walks.

Feeling better, the training intensified in June, with Ancic and Rosengren heading to the Slovenian Alps for almost two weeks before returning to Split, Croatia, the hometown of Ancic and the player he's most often compared to because of their similar frames, baritone voices and huge serves: 2001 Wimbledon champ Goran Ivanisevic.

The comeback, Part 1, happened at the Rogers Masters in Montreal in August, where Ancic topped local favorite Frederic Niemeyer, earning a standing ovation from Rosengren in the stands when the match concluded.
The joy was short-lived. Ancic felt something was amiss with his serving shoulder in qualifying for the Pilot Pen later in August and after having an MRI, doctors said there was no way he could compete at the U.S. Open -- he was scheduled to play Novak Djokovic in the first round -- or in Croatia's World Group playoff against Great Britain at Wimbledon in September.

"I knew already that the season was broken down, but I just wanted to get these couple of weeks in," said the 6-foot-5 Ancic, who's inching closer to finishing his law degree.

Ancic said the goal now is to be fully fit by the time next season begins so he can resume his climb in the rankings. He showed flashes of brilliance when he defeated Federer at Wimbledon five years ago -- Federer's last loss on grass -- and got to the semifinals at the All England Club in 2004, though last year was his most consistent campaign.

He won two titles, reached 13 quarterfinals, bettered only by Federer and aggressive baseliner Nikolay Davydenko, and made the last eight at both Wimbledon and the French Open, where he was derailed by -- who else? -- Federer.

"He can come forward, return well, he's got good groundstrokes, he's got a great serve, and he's very comfortable on any position on the court," said Nick Bollettieri, who has honed the careers of Andre Agassi, Maria Sharapova and Haas, to name a few. "If he gets anywhere near what he's capable of doing and his health is maintained, he's certainly in the top six or seven. He has the type of game that on a given day, can beat anybody in the world, including the best in the world."

Having overcome the mono and battled an assortment of injuries -- he's also been afflicted with a bad back -- some would say Ancic is destined to win a major or two. Rosengren thinks he can do it, but for more basic reasons.