The Fall and Rise of Jennifer Capriati remains one of the truly uplifting stories in sport. After several years in the wasteland of her teenage years, she rallied to win three Grand Slams in a span of five during 2001-02. Today, at 28, Capriati still has star-quality, even if her intensity seems to have waned. 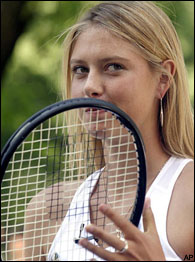 Last Sunday, however, she was eclipsed by a slender, 17-year-old Siberian -- a supernova named Sharapova.

Capriati and Elena Dementieva -- the French Open finalist -- were joined by Maria Sharapova at the Pilot Pen tournament in New Haven. The three women held court at separate tables and Sharapova drew all four local television cameras and the majority of the reporters.

Sharapova, who became the biggest thing in tennis with a victory in early July at Wimbledon (over Serena Williams, no less), has drawn crowds ever since. She is a marketing dream, combining Anna Kournikova's off-court game with Williams' power and mental toughness between the lines.

Be careful what you wish for?

Sharapova has alluded several times to a special someone -- who is it, inquiring scribes wanted to know?

Sharapova smiled, but said politely, "I try to keep my personal life private."

How is she handling the inevitable hoopla that surrounds her?

"I let other people take care of all those things," she said. "I just play tennis."

For the past few years, she has flown under the radar of big-time tennis. Is she concerned that she now is a marked player?

"I am sure they are a lot more hungry now to get me," Sharapova said. "I love that challenge. When somebody is hungry, I'm starving."

Fortunately for tennis fans, the 2004 U.S. Open that begins play on Monday is a veritable smorgasbord of women's talent. Sharapova may have the biggest buzz coming in, but in this dislocated season it is impossible to know who the winner will be on Sept. 11. The four women who have won the last six U.S. Open titles are all in the 128-player field, but it wouldn't be a shock if the winner was someone else.

Serena and Venus Williams have each won two Open championships, but recent difficulties with injuries have left their chances far from predictable. Although defending champion Justine Henin-Hardenne won the Australian Open, a mysterious virus left her weak in the French Open and altogether absent at Wimbledon. Oddly enough, based on recent form, 28-year-old Lindsay Davenport, the 1998 Open champion, has to be considered the favorite -- in what might be her final Grand Slam event. Kim Clijsters, who met Henin-Hardenne in the finals at last year's French Open and U.S. Open, is still recovering from wrist surgery.

Which brings us back to Sharapova. Even if you are a casual tennis fan, you know the story. She was born in Nyagan, in the Siberian region of Russia and was spotted by Martina Navratilova in an exhibition in Moscow. Navratilova counseled the family to move to America where they might receive better instruction. Leaving her mother behind, Sharapova arrived in Florida at the age of 6 and by the age of 9 she was belting balls from the baseline at the Nick Bollettieri Tennis Academy.

Seven years later, in only her third Grand Slam event, Sharapova advanced to the fourth round at Wimbledon, defeating No. 22-ranked Elena Bovina and No. 12 Jelena Dokic in the process. Sharapova finished the 2003 season with a ranking of 32 -- up 154 spots from the previous year -- and continued her seamless ascent in 2004.

In only her sixth career Grand Slam, she reached the quarterfinals at Roland Garros, won the singles and doubles titles at Birmingham before running through the field at Wimbledon. Sharapova took out two former No. 1 players and Wimbledon champions, Davenport and Serena Williams, in the last two rounds. In the final, Sharapova ended Williams' 20-match winning streak at Wimbledon. Sharapova, at 17 years, 2 months, became the second-youngest ladies' singles champion in the Open Era and the third-youngest of all time.

And so a star was born. Sharapova made a dramatic appearance at the Champions' Dinner at the Savoy in a cream-colored satin and chiffon gown by Marc Jacobs that she bought off the rack when Louis Vuitton opened one of its stores just for her. And while, she was maneuvering through the celebrity gauntlet a few days later in New York ("Regis and Kelly" and MTV's "Total Request Live", among many others), she found time to honor a commitment to appear in New Haven, less than 48 hours after her triumph. There, on Church Street in front of City Hall, Sharapova put on a clinic for hundreds of children.

"My parents and I came to this country when I was 6 years old," Sharapova said. "They didn't speak English and didn't have any money. But they worked hard and instilled values in me that I want to help pass on to these kids. If we can make it, so can they."

Sharapova did withdraw from her next tournament, Los Angeles, and was eliminated in her other two summer hard-court tournaments by fellow Russians -- Anastasia Myskina in the quarterfinals of San Diego and Vera Zvonareva in the third round at Montreal. Sharapova is tied for No. 6 in the WTA Tour's Porsche Race to the Championships, but few expect her to win at the National Tennis Center after such a cathartic ride.

The day after playing for the French Open title, Dementieva -- also tall, striking and blonde -- was spotted walking with her mother near the Place De La Concord, a very public venue near the Louvre Museum. No one seemed to recognize her. After Wimbledon, Sharapova probably wouldn't have enjoyed the same anonymity.

Her life has changed forever and she says she accepts that. Taking a break after Wimbledon, Sharapova did some sunbathing near her home in Bradenton, Fla. A picture of the bikini-clad athlete wound up in People Magazine.

"As a person, nothing has changed," she explained in Montreal. "A lot more people know me. It's not so easy to walk down the street any more. But that's what happens when you win.

"And I love to win, and these are the things I have to absorb."