NEW YORK -- A Yonex brochure found at its store at the U.S. Open shows Lleyton Hewitt, the company's high-profile spokesman, playing with the racket manufacturer's RDX 500 model. But at center court Wednesday at Arthur Ashe Stadium, Hewitt used an older, discontinued racket that was painted to look like the newer model to dispatch Wayne Ferreira in a first-round, straight-sets victory. 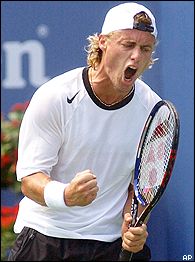 Those inside tennis circles know that Hewitt is one of many players who use a paint job to disguise their outdated rackets to look like the newer models they are paid to endorse. While top players on the ATP and WTA Tours might be willing to cash a manufacturer's endorsement check, often they aren't willing to part with their most prized piece of equipment on the court.

Hewitt uses Yonex's outdated Super RD-Tour, a model that was introduced in 1996 and has since been discontinued. The RDX 500 is distinctive with its "rectangular" style head; the Super RD-Tour's head is more "triangular" in shape, tennis experts explain.

Derrick Applegate, national sales manager for Yonex's racket sports division, said he doesn't believe consumers are being misled that they are buying the same racket players use in tournaments "as long as the player is using the same brand."

Still available on its Web site, however, is a 2002 advertisement that touts Hewitt and Yonex's MP Tour-1 model. "20-year-old U.S. Open champ grabs the 'New' Muscle Power racquet to supercharge his game," it claims. "For playability and pinpoint control -- Lleyton's choice."

Quietly, for the past several decades, racket painting has become a common practice in the tennis industry without many consumers being aware of it. It emerged as racket companies sought to break out their latest and greatest in technology; players, though, often prefer to use the same model that allowed them to reach elite status.

Painting was first seen as a temporary solution to that issue, but it's still prevalent today. Graphic designers paint the rackets to resemble the marketed model to the very detail, including the model names, at a cost of hundreds of dollars per racket.

According to one stringer who adjusts the rackets of many of today's top players, 90 percent of players alter the weight or distribution in a new racket. Of those who use older rackets, more than 25 percent use paint jobs to disguise them as newer models, he said.

"It has been going on for so long that it's just a part of doing business," said Nate Ferguson, who was Pete Sampras' exclusive stringer for the last five years of his career. "It's to a point where someone comes in to a tournament with a new look on their racket, we don't assume that he has switched rackets."

It's no surprise that pro players add more weight to their rackets than the store-bought models. They're asked to hit the ball with exponentially more speed than most amateur players. But is using an entirely different racket than the one they endorse disingenuous in a marketplace that generates $350 million in business each year?

"A lot of things are still very similar" between the racket he uses and the actual model he endorses, which he says he helped design. "Obviously the head is a little bit heavier and stuff like that -- things I need as a professional," he added.

Some industry insiders are not sure why racket painting takes place to begin with.

"Clearly it's not a great strategy to deceive the public," said Jay Schweid, a longtime stringer who customizes rackets for players. He often is asked by players to verify that the rackets are indeed theirs after they have been painted to meet manufacturer's specifications. "The sport would be better if this would go away."

The tennis racket world has not been tested like the golf ball market was in 2000. That's when Public Remedies, a non-profit consumer watchdog group, sued Nike Golf after its top endorser Tiger Woods admitted that the golf ball he uses wasn't available to the public.

Shortly after the suit was filed, Nike debuted the Tiger ball to the market.

Because of player preferences, tennis racket manufacturers don't usually force their high-profile players to actually switch rackets. Contracts merely say that they have to make an effort to try the latest models. Many keep their old standards.

"The racket companies can ask the player to at least try a new racket, but no agent should approve a contract that says that a player has to use it," said legendary tennis coach Nick Bollettieri, whose most high-profile pupil is Andre Agassi. Officials of racket manufacturer Head say Agassi uses its Radical model, which is available in stores, though it is customized to his specifications.

Paradorn Srichaphan, who is ranked 15th in the world, has used the Yonex RD-40 for five years.

"Of course they want me to use a new racket, but I've kept the same one for a while now," said Srichaphan, who advanced to the second round of the U.S. Open on Tuesday.

Because players often don't want to change, the companies don't pay them top dollar to endorse their rackets.

Throughout his whole career, Pete Sampras used a Wilson Pro Staff. According to Ferguson, Wilson asked Sampras to change rackets or at least paint the racket to the colors of the models being sold in stores. Sampras -- whose racket weight was equivalent to the Jack Kramer wooden racket he used while growing up -- refused to deviate from the black racquet with red and yellow pinstripes of the Wilson Pro Staff, since he claimed it felt different. As a result, Wilson didn't pay top dollar to the longtime No. 1-ranked player in the world.

"At the end of the day money means very little," said Hewitt, who has won $12.96 million in prize money throughout his career. Agassi and Hewitt are two players who reportedly guaranteed to make more than $1 million a year as the flagship for their respective brands. It is estimated that other top players make in the low- to mid-six figures.

Players who refuse to change rackets make it hard on agents, who make the bulk of their income on commissions from marketing deals. Good agents, though, also realize anything that will significantly affect a top player's performance on the court will decrease off-the-court earnings anyway. 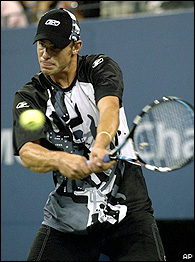 "Agents have a tough time making deals for their clients because some of them don't want to adapt to all the new technology," said Ken Meyerson, the agent for defending U.S. Open champion Andy Roddick.

When Roddick turned pro, his Babolat Pure Drive racket was sent to him straight off the shelves with no custom specifications. Now, the stick is a little bit heavier, but there are no paint jobs.

"I think it's kind of cool that people can play with the racket that I actually play with," Roddick said.

Roddick and Agassi have a major influence on tennis racket sales in today's market, according to Tom Russ, promotion director for Babolat USA.

The racket Roddick uses is not named after him (it's called the Pure Drive), but after he beat Marcelo Rios and Pete Sampras at the Tennis Masters Series event in Miami in 2001, Babolat started receiving calls asking for the "Roddick racket."

Mike Ludwig, a Florida-based racket stringer, said he's handled the rackets of Head endorsers Marat Safin and Gustavo Kuerten. Under the paint, Ludwig claims that Safin uses a Prestige Classic, which was made in the early 1990s, and that Kuerten uses a Pro Tour 630. According to Head, Safin uses a LM Prestige 600 and Kuerten uses a LM Prestige, the company's latest models.

"In the inner circle, a lot of us just laugh about it," said Ludwig, who has handled some of Maria Sharapova's rackets. They were Prince's Triple Threat Hornet models, he says, painted to look like the company's More Attack rackets.

Linda Glassel, vice president of sports marketing for Prince, said Sharapova has used its More Attack model and, since capturing her title at Wimbledon, she has switched to the Shark -- a Sharapova-endorsed racket that went on sale on Wednesday. After her first-round victory on Tuesday, Sharapova announced that she is now using the Shark.

Stringers, though, are skeptical that this could be another paint job.

"It's a gray area," Russ said. "It's assumed that each player in tennis might alter the weight of their racket, and that's not the problem. When it's a painted racket, that might be when you cross the line."

Few players have rebelled against the tennis racket painting. Mark Philippoussis has his racket painted entirely black because he doesn't want to give free publicity to companies he says either wanted him to paint it or use a new one.

"I used rackets that they stopped making years ago," Philippoussis said. "Companies obviously want you to paint it so that it looks like you are playing with the latest thing. But I just don't want to do that."

Even though racket painting emerged when older players couldn't adjust to technology, the practice shows no sign of slowing down. Stringers say many of the top college players are using older rackets with paint jobs.

"When people find out about this, I don't think they will care that much," Ferguson said. "They'll identify that Lleyton plays with a Yonex and that Roddick plays with a Babolat, and if they are fans of those players and they like the racket on the shelves, they'll buy it. Just like fans of Jeff Gordon will buy a Chevrolet because he drives one. They all know their car is going to be different from his."