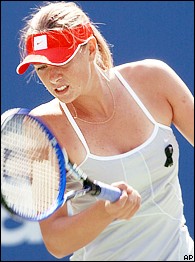 Many people wondered if Sharapova might rule the U.S. Open as she ruled Wimbledon. But she struggled in all three of her matches at Flushing Meadows, and exited earlier than many people expected.

Her loss, however, was not a tragedy -- a word we often hear in sports.

In the all-too real world of her home country, a true horror occured. Sharapova was aware. You could see the connection in the black ribbon that was pinned on her dress.

On Friday, reportedly 340 people -- almost half of them students -- died in Beslan, Russia, after two large explosions set off hostilities between Russian forces and pro-Chechnya rebels. At least 700 others needed to be hospitalized. In all, the siege lasted 52 hours.

For Sharapova and other Russian women players, this tragedy occured thousands of miles away from the security of the U.S. Open, where guards protect them from well-heeled patrons. But it hit right at home. Without a tennis career, most of these girls would be in school now.

"It's terrible what's going on," Sharapova said. "First of September is when so many kids go to school, it's the first day of school back. They go in with the flowers and the whole family. All of the kids and the teachers have this big party. Unfortunately, the terrorists decided to do something bad with those families and kids."

Sharapova was born in Siberia and spent several years in Chernobyl before moving to the United States at a young age. She felt she had to make a gesture for her match against Pierce.

And so Sharapova came up with the idea of wearing a ribbon to honor the victims and encouraged other Russian women to wear one. Dinara Safina wore it during her doubles loss, and Svetlana Kuznetsova wore it during her singles win over American Amy Frazier.

Elena Dementieva also wore one during her doubles match, but removed it when it almost came off, Safina said. According to Kuznetsova, some players fashioned the ribbon out of grip tape.

Safina, who is from Moscow, was eager to wear the ribbon.

"There is war. Why small children have to die, it's not their fault," Safina said. "Six-years old, Seven-years old, what can they do?"

Sharapova said the tragedy was not a distraction in her loss. She played her usual all-out style, but that cost her as she made 47 unforced errors and committed 14 double faults. Her 14th and final double fault gave Pierce a 5-3 advantage in the final set.

"I think I just tried to go for too much at the wrong times," Sharapova said. "You know, I think on a few balls, she put some pressure on me, and that made me want to hit the ball harder. Those are the things I just have to sort of realize and learn from them."

As it turned out, experience proved to be a major factor. Pierce has two Grand Slam singles titles (1995 Australian Open and 2000 French Open), and is 12 years older.

"I think the major problem was that I tried to do too much at a certain time when I didn't need to do it," Sharapova said. "And she's an experienced player and she knows what it takes. I think I've just got to learn those things. Especially on my serve, I just went for too much at the wrong times."

There has been a consistent pattern in Sharapova's matches. In the first two matches, she won the first set, lost the second set, and won the third. However, both of those opponents -- Laura Granville and Jelena Jankovic -- were inexperienced. Pierce is not. And Sharapova had a 3-1 lead in the final set, but could not finish.

"I think I was a lot more emotional (when I was younger)," Pierce said. "I would get mad at myself a lot when when I would miss a shot or a game. If I lost the first set, I thought I was going to lose the match. Yeah, I think I made a lot more mistakes than I do now. Now just with the experience, I'm able to be calm and to look at things really objectively while I'm playing on the court and what I'm doing, what's working, what's not working, what I need to change, those kinds of things."

Since Wimbledon, Sharapova has won only five of nine matches. But in a two-week span, she made a ton of money, amazed the world with her play and guaranteed her future, if not in tennis, certainly in endorsements.

She knows how lucky she is.

Many of the casualties in Beslan were young children. Sharapova, who still is not old enough to drink or vote, considers herself a role model to young children, the ones who will escape Russia's shadowy political landscape.

"I love playing for my country, getting the support," she said. "Especially for the kids and everybody, showing my example of what I can achieve so early. And maybe they can achieve it, too, just to get that in their minds. Like I said, once you pick up a racket or you just start playing, it's great to be an inspiration to other kids back home."

David Boroff is an editor for ESPN.com.