NEW YORK -- He stands casually in a corner of the nearly deserted player's lounge under Arthur Ashe Stadium. The Monday night doubles match, featuring Martina Navratilova and Maria Sharapova, is already on and several junior players, talking and laughing, brush right past him with no sign of recognition. 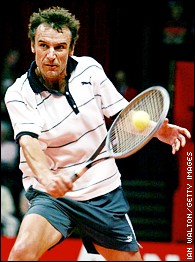 Mats Wilander turned 40 two weeks ago, but he still looks suspiciously like the 5-foot-11, 165-pound athlete that ascended to the world No. 1 ranking nearly 16 years ago. Wearing a white short-sleeve shirt and cream-colored cords, he drops into a blue wicker chair. His manner is calm, but the muscles in his jaw are working a piece of gum to death.

"I feel like I could play in the French Open -- right now," Wilander says, smiling. "No. I'm done, physically. I'm done."

For a brief, shimmering sliver of history -- 20 weeks, according to the ATP ranking system -- Wilander was the best tennis player in the world. His ground strokes and his focused mind were his most lethal weapons.

"I felt like I was the strongest man in the world -- the tennis world, anyway," he said. "I could always run forever, and that year I was in the best shape of my life."

In 1988, Wilander won the Australian Open, the French Open and the U.S. Open -- three of the four Grand Slam singles titles. No one has done it since. Roger Federer, the No. 1-ranked player in the world, has a chance to equal that feat with a win here in the U.S. Open.

"I hope he does," Wilander said, seeming to mean it. "I'm rooting for him. I'd love to have my name next to his and J.C."

Wilander, born in Vaxjo, Sweden, introduced himself to the world when he won the 1982 French Open. He was 17 years and nine months old -- the youngest man to ever win a Grand Slam title. And though his record was eventually eclipsed by Boris Becker and Michael Chang, he won three more Grand Slams over the next three years. And then his career, at the unformed age of 21, began to plateau.

"I decided to work really hard in 1987," said Wilander. "I hired Matt Doyle, a former pro player, and he helped me with my physical training. Lendl was the first to focus on that. He used to be weak, physically and mentally.

"Yeah, Lendl was the target, basically."

Lendl, a taciturn Czech, followed Connors, Bjorn Borg and John McEnroe as the sport's best player in the middle 1980s. He assumed the No. 1 ranking in September, 1985 and held it for more than three years.

"The whole plan was to get better for '89, '90," Wilander said, "but I started playing better immediately."

He won the 1988 Australian Open, defeating Aussie Pat Cash in a rousing final that ended in the fifth set, 8-6.

"Once I beat Cash in the Australian, the door was opened for me," Wilander said. "I believed that I could beat anyone."

Wilander hammered Frenchman Henri Leconte in straight sets in the French Open final. But in the quarterfinals at Wimbledon, crafty Miloslav Mecir dispatched him in straight sets -- his only Grand Slam match loss that year.

"I was a little unlucky at Wimbledon," Wilander said. "Did you ever see Mecir play? He was a wizard. He never reached his potential -- except against me. The U.S. Open was really a matter of doing what I knew I could do.

And then, 20 weeks later, Wilander lost the ranking to Lendl. Although some historians will tell you that his game was more well-rounded than Borg's, Wilander never reached another Grand Slam final.

"It had nothing to do with my being No. 1," Wilander said. "I had reached my full potential. I couldn't ever be a better player than I was in 1988. I just didn't have it in me to work as hard as I did."

Today, Wilander lives a quiet life in Hailey, Idaho, near Sun Valley, with his wife Sonya and four children: Emma, 11, Karl, 10, Erik, 7, Oskar, 6. In 2000, Wilander moved the family after 10 years in Connecticut because Erik has a serious condition that causes his skin to blister easily. Since there is less humidity in Idaho, Erik can at least skate and ski now.

Wilander still plays a few senior events and became the Swedish Davis Cup captain last year. He helped engineer a 4-1 upset of the reigning Australian champions earlier this year before losing a quarterfinal match to the United States.

"It will happen some day. I think he'll win the French. It's a mind thing. He was focusing on Queens at the French Open. He played Kuerten this year, a guy who thinks he beat Napolean on that court.