NEW YORK -- Andy Roddick wore a look of disbelief on the
court and an hour later when he tried to make sense of the beating
he just took. 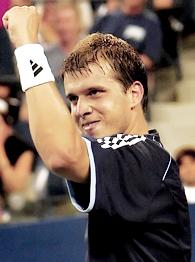 The worst birthday of Roddick's life ended with three straight
tiebreak losses and a shocking first-round exit from the U.S. Open
against a player making his debut in the tournament.

The 22-year-old Muller, ranked No. 68, outhustled, outmaneuvered
and, most astonishingly, out-aced Roddick 24-17 to claim his second
huge upset of the summer. In his first Wimbledon, he beat French
Open champion Rafael Nadal.

Asked how he managed to dismantle Roddick, Muller replied
sheepishly, "I have no idea."

"For me, it was just unbelievable to come out here today,"
Muller said. "I told myself to enjoy it and I did every minute."

Roddick hated every minute of it after blowing a 5-2 lead in the
first set and a chance to serve out that set at 5-3. From then on,
Roddick was frustrated by the left-handed Muller's canny mix of
angled groundstrokes and serves, his blend of speeds, and his
amazing ability to hit line after line.

Roddick flung his racket to the ground, dropped it another time
in disgust, and kept chomping on a towel during changeovers. More
than a few times he stared at the lines where Muller's shots
landed, as if not believing his eyes, or watched the replays on the
giant screen atop the stadium.

"I don't really remember a loss where I've felt this bad
afterwards," Roddick said. "I love playing here. I probably had
the best practice week I've ever had in leadup. It just didn't
translate tonight. ... I'm in a little bit of shock right now, to
be honest. I'd give anything to go back four hours right now."

Roddick looked shocked as he spoke, alternately staring at his
hands and running his fingers through his hair.

"I've put more work in mentally and physically in every which
way," he said. "I've never cared so much as I care now, which
makes it tough. Last year I didn't work hard. I didn't even step
up. I wasn't training hardly and somehow sneaking out big points.

"This year I just killed it as far as working hard and doing
all the right things. I took my lumps. ... We're talking about this
as a big disappointment and I'm still sitting up at three in the
rankings. I guess that's a good sign. It's tough for me to have a
lot of perspective right now."

Muller didn't serve as fast as Roddick but that didn't matter.
Roddick couldn't figure out how to break him in the tiebreaks and
in the last two sets. Rather than asserting himself, Roddick looked
flat as Muller dictated the match and forced the action, running up
65 winners to Roddick's 39, though making 33 unforced errors to 15
by Roddick.

"I took some risks and maybe sometimes I was also lucky,"
Muller said.

If ever a player deserved a turn of good fortune, and earned one
by dint of hard work, it's James Blake. To see him play so
beautifully and with unfettered ease in a straight-sets takedown of
former finalist Greg Rusedski in the afternoon was to watch a man
who summoned a reservoir of inner strength from a year of
unrelenting misery.

Blake won his first tournament in three years on Sunday in New
Haven, Conn., not far from where he grew up in Fairfield. It was a
victory, a few weeks after he reached the final in Washington
against Roddick, that showed how far Blake had come since his
lowest moments -- when he lay in a hospital bed with a fractured
neck last spring from a freak accident on court; or when he later
contracted an illness that affected his sight and hearing and
temporarily paralyzed part of his face; or when he watched his
father dying of cancer last summer. 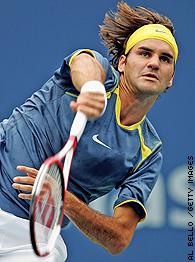 Muller, a former ITF junior world champion and U.S. Open juniors
winner like Roddick, cracked the top 100 last August, a week after
reaching his first ATP final at Washington with an upset of Andre
Agassi in the semifinals. Muller also reached a hard court final
this summer at Los Angeles before falling to Agassi.

Muller described himself then as "crazy" at times when he was
younger.

"I don't know if I wanted it too much or if I didn't know
really what I wanted," he said. "I got so upset and lost focus
and lost the match because of this. Some days it went well, some
days the second Muller was there and calmed me down. ... If I'm
calm, I feel I can really play with these guys."

He looked calm on this night while Roddick seemed thoroughly
rattled.

Roddick's only other first-round defeat at the Open came in his
debut as a wild card in 2000. He reached the quarterfinals the next
two years, won in 2003, and went out in the quarters last year. As
the winner of the U.S. Open Series leading up to the year's final
Grand Slam event, Roddick could have doubled the $1.1 million top
prize if he won the title again. Instead, he goes home with chump
change to pay his travel expenses.

Next up for Muller is his doubles partner, American Robby
Ginepri.

"It's kind of funny," Muller said. "Tomorrow I'm going to
play with him and Thursday I'm going to play against him."