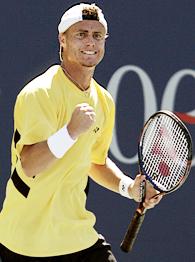 For most of the U.S. Open, the defending champion and top seed had seemed to sleepwalk through his matches, playing only as well as necessary, waking up and painting lines when pressed. He made up shots as he went along -- a sprinkling of aces at various speeds and angles, a backhand pass that got him out of trouble, a volley that
came out of nowhere between yawns.

That was enough until he got into a little trouble against Nicolas Kiefer on Tuesday. Suddenly Federer had a reason to elevate his game and stir some emotion. Now he swept in toward the net, pounded winners from the baseline, stopped wasting time and effort.

Under just the hint of pressure, Federer produced his best tennis of the tournament to beat Kiefer 6-4, 6-7 (3), 6-3, 6-4 and land safely in the quarterfinals. Match point was a masterful final stroke -- an inside-out forehand crosscourt that Federer tucked neatly in the corner, far from Kiefer's reach.

Lleyton Hewitt, the 2001 champion and runner-up to Federer last year, reached the quarters for the sixth straight year with a 6-1, 6-4, 6-2 win over No. 15 Dominik Hrbaty, who drew more attention for his pink peekaboo shirt than his play.

"It made it a lot easier for me to beat him today," Hewitt said. "I just couldn't lose to a bloke wearing a shirt like that."

Federer next plays 11th-seeded David Nalbandian of Argentina, a 4-6, 7-6 (4), 6-4, 6-2 victor over Italian Davide Sanguinetti. Federer said before that match he would prefer Nalbandian, "because I have a bad record against him."

"Most guys would like to play the guy they have the winning record against," McEnroe said when he stepped outside the broadcast booth. "That's what you love about Roger -- he embraces the challenge."

Nalbandian holds a 5-2 record against Federer, though Federer won the last two meetings in 2003 and '04.

"I like to play against guys who have beaten me, especially early in the career, try to get them back," Federer said. "He was a tough opponent for me for a long, long time."

The 24-year-old Federer lost only one set en route to his third Wimbledon title two months ago, and that was also against Kiefer, who gives him tough matches but can't quite win. Federer has beaten the German six straight times, four of them this year.

After losing the second-set tiebreak when he netted a backhand half-volley, Federer found himself in difficulty at 3-3 in the third when he faced double break point at 15-40. His answer -- a 120 mph service winner to save one break point, a brilliant backhand
crosscourt pass to save another. Kiefer made two errors after that and his opportunity was gone.

"That game was huge, absolutely," Federer said. "I was not so happy the way I was playing, especially in the second set. Third was getting better, especially after that pass. I really felt that shift in momentum. I took advantage of that. In the fourth set, I started to feel like I'm really in control again where I didn't feel that way at all before. I had the feeling actually momentum was all on his side."

Like an artist standing back to admire his work, Federer watched a replay on the giant screen of the backhand pass that saved break point.

As dominant as Federer has been on grass the past few years, he's no less the ruler of hard courts. He's won 32 straight matches on the surface and is 42-1 on it this year, his lone loss coming in January against Marat Safin in the Australian Open semifinals. Overall this year, Federer is 68-3.

"Federer's play, for him, is like a B, B-plus, which for anyone else is an A-plus," McEnroe said. "For him, he hasn't really played as well as he's capable of. He's been unsettled a couple of times. Today was one of those matches. Sometimes you don't play
your best, but the real champions win when they're not playing their real best."

Hewitt advanced to play Jarkko Nieminen, who became the first Finn to reach the quarters in a Grand Slam event with a 6-2, 7-6 (6), 6-3 victory over Spain's Fernando Verdasco.

Maybe it's the proximity to the Garment District, but the Open seems to be the spot for fashion statements. Three years ago, Tommy Haas was ordered to change after he showed up in a sleeveless muscle shirt. Now, of course, all the kids are wearing them.

This year, it was Hrbaty's shirt causing the stir. The black-and-pink shirt looks ordinary from the front. On the back, though, there are oval-shaped cutouts -- "flyholes," Hewitt called them -- below each shoulder that look like a peekaboo bra. Or as if the shirt had gotten caught on his head and he hadn't pulled it on all the way.

"I don't really know what the design means, if it's only an idea or if it had any purpose in the beginning. Or somebody was trying to make a smiley face in the back," Hrbaty said. "The shirt itself is actually nice. You don't sweat as much. Also, you don't feel the heat that much."

The shirt was of no help against Hewitt, though. The Australian broke Hrbaty three times in the first set, including once at love.

"I got out of the blocks well today," Hewitt said. "I went out there with a game plan and just executed it. I did what I needed to do and didn't feel that under pressure."

Hrbaty, a quarterfinalist last year, gave Hewitt more of a game in the second set. He broke the Australian to go up 3-1 but then gave the break right back. With the set tied 4-4, Hrbaty was broken again after two careless mistakes.

After Hewitt raced to the corner to chase down a shot, Hrbaty stood ready at the net, set up for what should have been an easy winner. But he put too much power on the overhead, and it sailed past the line. He did the same thing on the next point, and Hewitt
took the game when Hrbaty's backhand hit the net and bounced out of bounds, one of 49 errors he made during the match.

"I didn't play my best. I made many mistakes against him," Hrbaty said. "I had a couple of chances in the second set where I had the feeling I could turn the match the other way and I made two mistakes."

Hewitt served out the set and breezed through the third to move into the quarterfinals, keeping his streak intact. The only time he's failed to make the quarters was in 1999, when he lost in the third round in his Open debut.

"It's a great record to have here," Hewitt said. "It's not an easy Grand Slam, not an easy tournament to do well at. To go out successfully every year, it's a huge positive I think. I love playing in New York. I love the conditions, the court surface, the balls, everything about it."