NEW YORK -- Andre Agassi, 35 years young, took a pounding
for two sets from a sizzling James Blake, pounced back at him for
two more, then survived a tiebreaker in a wondrous five-set drama
reminiscent of Jimmy Connors' legendary run to the U.S. Open
semifinals at 39. 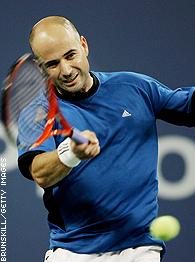 Rendered helpless at the start by Blake's dazzling speed and
precision, Agassi asserted himself in the third set Wednesday
night, turned the match around and looked fresher at the end of a
3-6, 3-6, 6-3, 6-3, 7-6 (6) triumph that put him in the semis -- two
wins from capturing the title he won in 1994 and '99.

"It couldn't have been more fun to lose," Blake told Agassi as
they embraced at the net and were given a long standing ovation in
a still-packed Arthur Ashe Stadium.

Ginepri gutted his way out of trouble and got the gift of
Guillermo Coria's 13th and 14th double-faults on the last two
points to win his third straight five-setter against a seeded
player, 4-6, 6-1, 7-5, 3-6, 7-5, and guarantee that an American
will play in the final.

"It's all a big blur right now," Agassi said of his 2-hour,
51-minute duel with Blake, which ended with Agassi's final forehand
winner smacking the sideline. "It's always great when the end of a
match is decided by quality shots and somebody winning it instead
of somebody losing it.

"I question myself every day. That's what I still find
motivating about this. I don't have the answers, I don't pretend
that I do just because I won the match. Just keep fighting and
maybe something good happens."

Agassi, playing in his 20th straight U.S. Open, said that a
match like this one against Blake "means as much to me as doing it
in the finals."

"It's all a bit surreal. I get out there and I try to work and
I come off the court and many times in my career I feel like it's
been a dream. That's how it is here. It's a dream to be doing this.
I feel same way with the my children, feel same way off the court.
It's all surprising to me."

When someone brought up the R-word -- retirement -- Agassi was at
a loss for a simple answer.

"When I get asked that question, I'm just a bit numb to it
really," Agassi said. "All I can say is how I feel ... I don't
know what's going to happen."

Like Connors' long matches in 1991, Agassi has had to dig down
deep to go to the semis, winning a five-setter for the second
straight round.

At 25, 10 years younger than Agassi, Blake was faster, sharper
and stronger -- for two sets. The difference between them wasn't
age. It was Blake playing in a magical zone, clicking in every
aspect of his game, digging out balls that seemed out of reach,
while Agassi played merely good, decent tennis.

That changed in the third set, when Agassi raised his game and
Blake fell back to earth. In the fifth set, Blake recovered enough
to break Agassi for a 3-2 lead, then had a chance to serve out the
match at 5-4. But Agassi crushed a couple of returns and broke
back. They played on to the tiebreak, where Agassi won on his
second match point.

"James is a guy that runs on high octane," Agassi said. "He's
a fighter jet. He burns the fuel fast and furious. He's gotten much
better with that over the years, but he plays so big and he's so
fast that if an edge does come off, it's a big relief. He flies
around the court. I put him over anybody on the tour in the
straight 100 meters.

"When you see a little bit of that edge off, when he comes down
into just warp speed, it gives you a little breath of life."

Blake said he felt as good as possible after a loss.

"I fought my heart out, did everything I could," he said. "He
played a little too good. He really started going for broke on some
of those, and champions make those. I'm happy for the game of
tennis. This match was hyped four or five days ago and I feel like
at least it lived up to it.

"If there's anyone I'm cheering for, it's Andre."