Brad Gilbert, typically breathless, is doing what he does best: multitasking.

The former coach of Andre Agassi and Andy Roddick is driving Andy Murray, his latest protégé, to the Lindner Family Tennis Center in Cincinnati and, simultaneously, pontificating on the game he adores.

"Do you know what the four most important words in tennis are?" he shrieks into his mobile phone. "I'll tell you, it's -- where is the AC?" 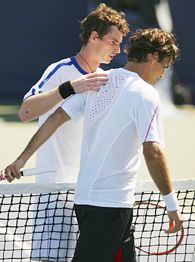 Where is the AC? Those are the most important words in tennis?

As the U.S. Open rapidly approaches, you may be hearing more of this mantra.

Gilbert has a legendary power of persuasion, and his 19-year-old charge is buying in -- in a big way. A year ago this time, the petulant Scotsman was ranked No. 132 in the world, and widely viewed as a negative-thinking, enfant terrible. After three weeks of working with Gilbert, Murray finds himself ranked No. 19 among ATP players, an astonishing climb that included a victory last week over No. 1-ranked Roger Federer.

And yet, by ATP standards, Murray's leap up the ladder is by no means extraordinary. Nicolas Almagro, Novak Djokovic and Marcos Baghdatis have all made similar jumps into prominence. On the women's side, 17-year-old Nicole Vaidisova has thrust herself into the top 10 and Shenay Perry and Shahar Peer have also made impressive progress in the rankings.

With Agassi retiring and Serena and Venus Williams and Lleyton Hewitt outside the top 10, new blood is the theme of tennis in 2006.

"It's true of all sports; one guy leaves, a new guy has to come in," said Todd Martin, who won eight ATP titles in 15 years. "It is highlighted even more in our sport. If I get drafted out of college to play basketball and sign a contract, I've got a job for five years.

"That doesn't happen in our sport."

In others words, if you don't win, you don't eat. Make no mistake, these young players are exceedingly hungry.

Murray, for example, produced the biggest win of his career last week by earning 14 break points against the Wimbledon and Australian Open champion -- and converting half of them. While Federer was clearly out of form, tired from a heavy summer schedule, it was the first time in 194 matches he was beaten in straight sets and the first time in 18 consecutive tournaments that he failed to reach the final.