NEW YORK -- If Andre Agassi keeps this up, it's going to be
absolutely exhausting. For him, for his opponent, for his fans, for
everyone at the U.S. Open. 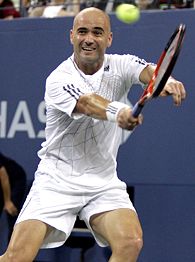 Knowing each time he steps on the court could be his last time
as a pro, Agassi clearly does not want to go gently, and he kept
overcoming deficits Monday night, pushing his 36-year-old body
around Arthur Ashe Stadium for 3½ hours.

Agassi's eyes welled up with tears as he served out the final point.

"I want to be here real bad, for the whole two weeks," Agassi
told the crowd during a postmatch interview. "I really want to
leave my best stuff on the court. ... I'm very proud of this day,
and I'm glad it gets to happen again."

There were moments, though, when it looked as if Agassi would be
bidding adieu for good. After he lost the first set, for example.
And especially when he fell behind 4-0 in the third set, causing
his wife, former star Steffi Graf, to pace a bit.

Yet that's when Agassi found the energy and shots to reverse
things. Coincidence or not, he went on a five-game run shortly
after motioning to his coach, Darren Cahill, to bring him more
tightly strung rackets. It also was around that time that Pavel -- a
32-year-old ranked 77th who hadn't played a hard-court match since
March -- was visited by a trainer because of stomach cramps and diarrhea.

Agassi got to a third tiebreaker, then dominated the final set.
It was a fitting way to cap a day that celebrated three of the
sport's most significant figures. Before Agassi's match, the U.S.
Tennis Association rededicated its facility, naming it the Billie
Jean King National Tennis Center. And Jimmy Connors was on the
scene, too, coaching Andy Roddick and soaking in the adoration.

Roddick enlisted Connors last month, after a third-round exit at
Wimbledon, and the partnership appears to be paying off, so far.
Roddick says his attitude can't help but be improved with the
enthusiastic Connors in his corner, and the 2003 U.S. Open champion
began this year's last major by beating Florent Serra of France
6-2, 6-1, 6-3.

Next for Agassi is a match Thursday against eighth-seeded Marcos
Baghdatis of Cyprus, a 21-year-old player who reached the
Australian Open final and Wimbledon semifinals this year. He should
be a sterner test than Pavel.

Agassi won the Open in 1994 and 1999, part of his collection of
eight Grand Slam titles, and was the runner-up four times,
including last year. When Agassi won that first U.S. Open
championship, his blond hair was long and tucked under a ballcap,
his shirt was a loud purple, and he wore a pinkie ring and dangling
earring.

Hard to believe that same person was under the lights at Arthur
Ashe Stadium on Monday. Look at Agassi now: shaved head,
country-club-ready white outfit, and the beaded necklace that
reads, "Daddy Rocks," made by his son. Both of Agassi's children
were in the stands; in the fourth set, Graf was using a video
camera, just like any parent on an outing with the kids. Agassi's
father was there, too, as was his brother Phil.

"It would be nice if he wins, but it's not important really,"
Phil Agassi said before the match. "Even if he loses love and
love, it won't put a damper on everything he's done. Everyone is
here, the whole office and the whole family."

Agassi stepped out of the locker room, dropped his racket back
on the carpet and took a few moments to stretch. After walking out
on to the court to a rousing ovation, he shared a hug with King,
who handled the coin toss.

"You're going all the way!" came a shout from the stands.

After trotting back to a baseline for the prematch warmup,
Agassi paused, glanced around the arena and took a deep breath.

He knew, after all, this moment would arrive. It was time to
take it all in.

Once play began, the beseeching cries of "Let's go,
Ahhn-dray!" could, in theory, have been for either competitor.
Just to make it absolutely clear how the crowd felt, one man yelled
out in the second tiebreaker: "There's only one Andre!"

Late in the second set, some fans began applauding Pavel's
faults, and the chair umpire repeatedly asked for quiet. As Pavel
presciently put it beforehand: "I hope there are going to be five
or six people cheering for me."

The flash bulbs popped from the start, during warmups, between
games, between points. During points, even.

And Agassi provided some picture-perfect moments, glimpses of
his glorious past, of the player who's won 60 singles titles. He
smacked 17 aces at up to 125 mph. He took as big a cut as you'll
ever see on some groundstrokes, as though putting whatever energy
he might have left into each swing. He used what was often
considered his trademark, the hard-hit return, to gain the
advantage at times. One example: He turned around a 123 mph serve
with a backhand return right at the baseline that Pavel couldn't
handle, giving Agassi a 9-8 edge in the second tiebreaker.

Yet it was also clear why he decided to announce two days before
the start of Wimbledon, in late June, that this would be his
farewell event. Over and over, Pavel would end points with short
drop shots that Agassi wouldn't even chase. Agassi double-faulted
eight times. And as much of a baseline tactician as Agassi always
has been, it was Pavel who had the better of many of their lengthy
groundstroke exchanges, winning 14 of 21 points that lasted 10
strokes or longer.

Still, on one of those points, Agassi's defense was enough that
Pavel sailed a backhand long to end the second set. Agassi pumped
his fist toward Cahill and others in the players' box, then shook
his racket in Graf's direction.

The spectators rose in unison, staying on their feet and
applauding throughout the changeover. When it was time to start the
third set, Agassi skipped out to the baseline, looking downright
childlike.