NEW YORK -- There was no drumroll on the day Vania King made the most momentous choice of her life, no trumpet blasts, not even a press conference. The only sound accompanying her decision to turn professional on July 5 was the whisper of a page turning on the calendar.

The occasion might have passed unnoticed, but the quietly confident King might not fly under the radar too much longer.

King's rocket ride from No. 721 at this time last year to a career-high No. 70 in the WTA rankings this week prompted her to spurn the college coaches who were courting her and devote herself to tennis full-time at age 17. She is an all-or-nothing personality who had said she would either get her college degree or play on the WTA Tour, but not both. 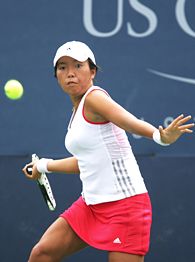 After weighing the pros and cons for months, King is also being deliberate about the business side of her career and has not yet signed with an agent. She doesn't plan to change her home base of Long Beach, Calif., where her parents David and Karen ran a fish-and-chips restaurant and raised four tennis-playing siblings. Her brother, Phillip, a Duke University graduate, won his first ATP-level match earlier this month.

King, who is 4-4 since turning pro, defeated Australian wild card Alicia Molik on Monday, winning her opening match at Flushing Meadows for the second straight year. She will meet world No. 2 Justine Henin-Hardenne of Belgium in the second round, the second time King has faced a woman ranked that high this season; she lost to Kim Clijsters in straight sets in Fed Cup play in her pro debut.

The future crystallized for King at Wimbledon, where she extended Serbia's then-29th-ranked Jelena Jankovic to three sets before losing in the second round.

"That was a little bit of a turning point," King said. "I hit with a lot of top players, and then I played Jankovic. I should have beaten her, but I started cramping during the match. Then she beat Venus [Williams], who's a Grand Slam winner in her own right. That sent a message to me that I could compete with the top players.

"It's a relief to have [the decision] over with, but at the same time, now that I know it's the road I'm going to take, there's pressure in a different way." King plans to finish the requirements for her high school degree through home schooling by the end of the year.

A dearth of healthy American veterans led Fed Cup captain Zina Garrison to select King for the team last spring and again this summer. Along with No. 40 Shenay Perry and No. 57 Jamea Jackson, she is one of a phalanx of younger, lesser-known U.S. women who are trying to come into their own as premier players such as Lindsay Davenport and the Williams sisters take stock of their own playing futures.

Ruffels has worked as a developmental coach for the U.S. Tennis Association for the last eight years and had met King several times. The USTA asked him to accompany King to Wimbledon, where the two clicked and decided to form a partnership.

"I like her to be really aggressive and come to the net, and it seems like she appreciates that," Ruffels said. "It brings out the best in her."

King, a naturally quick player, is working on her service speed. She's listed at 5-foot-5, but is strong for her size. "Pound for pound, she packs a pretty good punch," Ruffels said. "When she played [Dinara] Safina in L.A., she certainly wasn't getting outhit.

"The matches she's lost have been tight, and she had a good one [Monday]. She's got a very, very good head on her shoulders."

The newest pro on the WTA circuit will combine with one of the oldest in U.S. Open doubles competition -- frequent hitting partner Amy Frazier, 33, who turned pro less than a year before King was born. They've played together twice before this season, including at the French Open.