A day after rain prevented any matches from being completed Tuesday for
the first time since 1987, virtually the whole tennis world was on
display at Flushing Meadows. 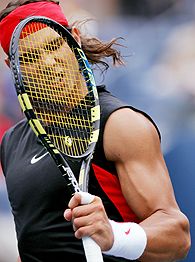 A year after bowing out in U.S. Open's first round on the day he
turned 23, Roddick celebrated turning 24 on Wednesday by reaching
the tournament's third round.

"I hope I'm going to give you guys something better to cheer
about this tournament," Roddick told the crowd. "Going home in
the first round is not fun, I know that."

With new coach Jimmy Connors watching in the stands, Roddick
dominated with his serve, clocking 140 mph, totaling 21 aces and
one double-fault. Roddick faced only two break points and saved
both, including one with a serve-and-volley net rush.

"Overall, I felt like I was cruising through service games
pretty easily," he said.

At the 2005 U.S. Open, Roddick also played at night on his
birthday, but was knocked out in three tiebreakers by Gilles
Muller, the first man from Luxembourg to compete in the tournament.

The top-seeded American, No. 5 James Blake, needed six match points to get through.

With thousands of fans milling around the plaza, the place was
cooking. The scent of grilling hamburgers wafted over outer court
No. 5 -- many years ago, Goran Ivanisevic joked that he never liked
to play there because the smell made him hungry.

The top-seeded Federer rebounded from a startling loss two weeks
ago to overwhelm Wang Yeu-tzuoo 6-4, 6-1, 6-0. Aiming at his third
straight Open title, Federer had won 55 straight matches on North
American hard courts before Andy Murray beat him at the Cincinnati
Masters.

"I thought I was always in control, obviously," Federer said
after his victory. "I always said I prefer to be the favorite
rather than the underdog. That's worked out for me since I became
No. 1."

Known for his success on clay, the second-seeded Nadal had an
easy time on the hard court. He won the first eight points and beat
1998 Open runner-up Mark Philippoussis 6-4, 6-4, 6-4 in the first
round.