NEW YORK -- Andre Agassi walked off the court the way he
wanted, to a champion's ovation.

In the end, despite all the tears, it hardly made a difference
to him or his fans that he didn't win. 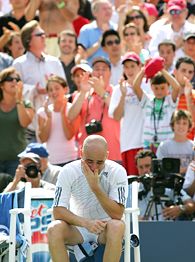 Betrayed by a creaky body that needed four injections this week,
his spirit never waned. And that is something Agassi and his fans will always
remember.

"For me, it was never about winning and stopping," he said.
"It was about getting the most out of myself for as long as
possible," he said.

Agassi announced this summer that the Open would be his final
event. It seemed unimaginable that he could win seven matches to
take the title, but after two inspiring victories, fans began to
hope and wonder.

Instead, the end came with Agassi looking more like a 36-year-old man with a bad back and ready for retirement than the younger version of himself he appeared to be in the first two rounds.

"I just credit the doctors that I was able to play out there
today," he said. "I didn't expect a whole lot physically. And
sure enough, it was real early when I wasn't feeling so good."

The 25-year-old Becker started strong, showing few nerves, and
closed out the match with a 133 mph ace.