The 21-year-old Serbian was (unsuccessfully) trying to describe Tuesday's win over the No. 5-ranked woman in the world -- the one that delivered her into the first Grand Slam semifinal of her career -- when, laughing through the tears in her brown eyes, she paused.

"What was the score? I don't even know the total score."

"Six-two, six-one?" she said, tapping her head with a cartoon flourish. "Oh, my God. Don't believe. I mean, it's amazing."

Jankovic rolled her eyes and let loose an exhalation that could be felt 10 feet away in the first row of the interview room. 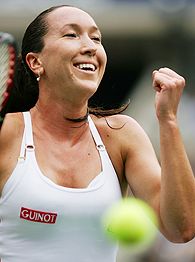 These are the deep, deep emotions that are stirred when you have lived the lowest of lows and emerge from that dark hole and experience the highest of highs -- all in a period of the last six months. Hard as it is to believe, Jankovic went 16 weeks and nine tournaments without a victory. Not a single one.

This from a world junior champion with legitimate top-10 aspirations. Imagine being one of the best in the world at what you do and, for nearly four months, having absolutely zero positive reinforcement.

Back in January, Jankovic lost to Olga Savchuk, ranked No. 188 in the world, and then to Daniela Hantuchova a week later in Tokyo. A mysterious virus took her out of play for three weeks, then affected her long after she returned. Jankovic has been reticent to discuss that difficult time, but on Tuesday, perhaps buoyed by her breakthrough, she candidly addressed the subject.

"Whenever I got on the court, I didn't have the will to practice, didn't want to play," she said. "When I get on court, I don't want to win matches. It's just like I was -- it was not -- it was something weird.

"It is something that I never felt before, and I almost quit playing tennis."

With her game in such wretched condition, Jankovic, a second-year student at a Megatrend University in Belgrade, longed to throw herself into political economics -- her parents are both economists -- and statistics courses. Why?

"Because I am a person who is quite competitive and I don't like to lose," she continued. "When I started losing so many matches, that's not what I want to do. I don't want to just be in the draw and lose first round every time. If I can not go far in tournaments and compete with the best players and be a champion, I don't want to play. That's how I was.

"I was the No. 1 junior in the world. After going to the top, I was always climbing up the rankings. When this happened, it was tough time for me. For me, I'm a bad loser. It hurts a lot."

It was written in Serbia, she explained in her native language, that she was a Ferrari stuck in the garage.

The losses continued. In Miami, she lost to Victoria Azarenka, ranked No. 128 in the world. Three weeks later, it was No. 193 Julia Vakulenko in Charleston, S.C. And so it went, in Warsaw and Berlin, until the Tour stopped in Rome. Her mother Snezana, who doesn't usually travel with her, joined her there.

"Every time I would lose a match, she would always give me support and tell me that I can do it, I have the potential," Jankovic said.

She ended her streak with an easy victory over Elena Likhovtseva in Rome and followed it up with two more, losing in the quarterfinals to Venus Williams. At Wimbledon, she returned the favor, ousting Williams in the third round before losing to Anastasia Myskina in the round of 16. Her best result was reaching the final at Los Angeles, where she lost to Dementieva in a rousing three-set match.

Now, she has avenged that defeat, too, and has beaten three top-10 players in her last three matches, including Svetlana Kuznetsova, the 2004 U.S. Open champion.

The Los Angeles match gave her valuable insight into Dementieva's quirky soft, slice-inflected serves. Frankly, she would rather take a cut at Serena Williams' fastballs, which can reach as high as 120 miles an hour than the 96 mph changeups that Dementieva threw at her on Tuesday.

Jankovic typically plays a big, fearless, full-throttle game, but with rain threatening in Arthur Ashe Stadium, she raised her game to a dizzying new level. She was aggressive, hitting out on virtually every shot when her feet were in any kind of stable position. Combined with her relentless retrieving, it was a combination impossible to defeat or even dent.

Dementieva had seven service games and failed to win one, a statistic remarkable -- even in light of the Russian's woeful offerings -- for a top 10 player.

A point in the fifth game of the second set underlined her lethal court coverage: Sprinting to her left, Jankovic ran down a Dementieva shot that had bounced through the doubles alley, then braked and sprinted to her right, and hit a forehand in the other doubles alley that Dementieva couldn't answer.

Serving for the match, Jankovic started to feel the enormity of her effort. There were six deuces, four break points but on the fourth match point, Dementieva couldn't find the court with a backhand service return.

The trajectory of Jankovic's mounting confidence can be traced by her four Grand Slam results this year: Australian Open (second round), French Open (third round), Wimbledon (fourth round) and U.S. Open (quarterfinals).

"Like I'm climbing up the hill or something," she said, laughing. "I'm quite talented, and now it's just that I'm really motivated and I have the hunger to do well."

Jankovic comes from one of the most uber-competitive tennis environments ever created -- Nick Bollettieri's tennis academy in Bradenton, Fla., where she arrived from Belgrade at the age of 12. Still, intensity and work ethic never came naturally to her. She always has moved through the world loud and happy and has watched wistfully as fellow students Maria Sharapova and Tatiana Golovin and, most recently, Jamea Jackson made an impression on the tennis world.

And now, it is her time.

Jankovic is playing a quality of tennis good enough to win the U.S. Open. She'll face No. 2 Justine Henin-Hardenne in the semifinals and, in the event of an upset, quite likely Amelie Mauresmo or -- in a delicious back-to-the-future possibility -- Sharapova, against whom she played dozens of practice matches on the back courts at Bollettieri's.

"I think some things are meant to happen," Jankovic said. "Maybe if I didn't lose 10 matches in a row, maybe I wouldn't be in the semifinals here. Maybe I would lose in the second round or something because I would be too loose [and] kind of careless, in a way."