NEW YORK -- Lindsay Davenport has always downplayed her importance like a kid who sticks her fingers in her ears at the sound of too much praise. If this was her U.S. Open farewell, it was a fittingly understated one for a no-fuss player.

Davenport put in a high-level effort that fell short in a half-full stadium under a flat, overcast sky, falling 6-4, 6-4 in the quarterfinals to Justine Henin-Hardenne of Belgium, the world No. 2 who has learned to crack her game like a seasoned lock-picker. It was Henin-Hardenne's seventh straight victory over Davenport since 2003.

The 30-year-old Californian didn't linger on-court or gaze longingly into the stands in Arthur Ashe Stadium, where she won the 1998 Open by scooping out a Martina Hingis drop shot on match point. Davenport gave a brief wave and a smile and proceeded to her post-match press conference, where she once again politely squelched questions about her future. 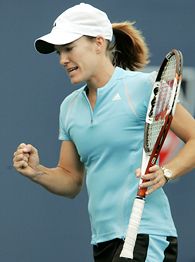 She said she will play tournaments in Bali and Beijing in the next few weeks and expects to make a decision about whether she'll enter next year's Australian Open by late November or early December.

"Twelve months is obviously a long time away, but at this point I have no idea," Davenport said of the chances she'll be back in Queens next August. "It's the only time I'll ever most likely retire from something. When I know, I'll let you guys know. But I don't know how it works.

"Most days, still I feel like, OK, I want to commit my day to being that good tennis player. Other days, it feels like a drag. While I still have more good days than bad days, I'm going to keep playing."

Davenport has been through this once before, in late 2004, when she talked about retiring as she was finishing the year ranked No. 1 for the third time in her career. She wound up coming back and repeating that feat. This time, she wants people to take her uncertainty at face value. Her coach apparently does.

"People are more looking for [a retirement decision] than allowing it to happen as it should," Adam Peterson said. "I think she still has more good tennis left in her.

"I'll go to my grave thinking she's one of the best ever. To play girls six or seven years younger than her and having to work that hard to get in shape, she shows her game is one for the ages."

Reading between the lines, the resolutely private Davenport also seems to be trying to tell us that tennis goodbyes are not necessarily occasions for public catharsis. That's consistent with the way she's always operated, keeping her emotions and expectations in check.

Davenport said watching the replays of her '98 Open championship match feels like watching a stranger. "I've seen the highlight twice, and it still -- it doesn't seem real," she said. "I mean, all these years later, I don't really equate it to my career yet."

That kind of run wasn't in the tea leaves this time. Davenport was unable to counter the 24-year-old's impressive array of options, which included powerful ground strokes, junkball slices, well-placed volleys and gliding approach shots.

After a crisp first set, Henin-Hardenne called for a trainer and had the area under her right shoulder blade massaged. She said she has had intermittent pain in her back and ribcage for some months.

"I don't know what more she could have done aside from wait for a few more mistakes from Justine,'' Peterson said.

The fans roused themselves and upped the decibel level slightly when Davenport was playing a key point. "Come on Lindsay, we're all behind you," one man bellowed somewhat somberly as Davenport fought through one particularly long service game.

The atmosphere wasn't nearly as electric as it had been in her third round match against Katarina Srebotnik in the more intimate confines of Louis Armstrong Stadium, when the crowd gave her a standing ovation near the end of the match, "willing her along," said her husband, former USC All-American Jon Leach.

"She's very unassuming," said Leach, now an investment banker with Morgan Stanley. "She doesn't carry herself to attract attention. It was neat to see them rally around her.

"I think the way she's carried herself -- it's all the years of service. There's respect for all she's accomplished even if it wasn't two-Grand-Slams-a-year kind of numbers. Day in and day out, handling herself well, being a big part of USA tennis, being a good influence on younger kids playing. Nobody leaves saying, 'I wish my kid didn't see that.'"

Reaching the quarterfinals at this tournament was a major accomplishment for Davenport, even though she is little more than a year removed from her scintillating Wimbledon final against Venus Williams and was world No. 1 as recently as January.

A bulging disc sidelined her in March, and just when she was ready to come back, she passed out and fell at home, suffering a concussion. Tests didn't reveal anything ominous, but it delayed her return for another couple of weeks. When she began training in earnest in mid-July, Peterson said, she "felt like she'd never played tennis before."

At that point, Davenport hadn't hit for four full months. Leach said doctors had advised her to make sure the back healed properly or there could be serious repercussions.

"Trying to carry a baby, trying to just get along in everyday life, a bulging disc is a lot different than if you actually have a herniated disc" necessitating surgery, he said.

"It's tough in the middle of the season, everyone's playing so well, to step right into the fire. This is probably the best outcome that she and I could have hoped for her, to be healthy and playing at this level again."

She came back in August to play in two tournaments and made a strong run to the final against Henin-Hardenne in New Haven, Conn., where Davenport was forced to withdraw midway through the match with a sore shoulder unrelated to her other recent travails.

A few days ago, Davenport remarked that she was surprised when she was told that the crowd watching Andre Agassi's match in Ashe applauded when her score from the adjacent stadium was announced.

"I was like, 'Are you serious?'" she said. "I don't think I realize much of anything about what I am to these people or my impact or anything. I'm pretty clueless about it all."

That's OK. Leach is clued in, and summed up her appeal very well for an obviously biased guy.

"It doesn't surprise me that she finds herself at the end of her career not expecting anything from anyone  I think she is much more comfortable playing her role as the underdog, overachieving person that people can relate to."