NEW YORK -- They are childhood friends who give each other fits now. Tatiana Golovin has never beaten Maria Sharapova. Sharapova never breezes when she plays Golovin.

They're understandably a bit less close than they used to be when they were thrown together as kids at Nick Bollettieri's academy in Florida, two Russian-born prodigies less than a year apart with a lot in common.

They've both made it to the top echelon of a very tough business, but there's still a big gap between them. Sharapova has the higher ranking, the haughtier bearing, the blue-chip endorsements, the buzz. Yet Golovin has a knack for making things difficult for her, and Wednesday night she did her best to prevent Sharapova from reaching her third Grand Slam semifinal of this season. 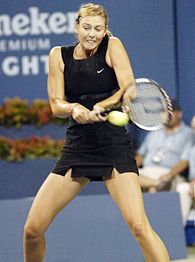 The third-seeded Sharapova survived a 7-6 (4), 7-6 (0) U.S. Open quarterfinal match that was long (2 hours, 11 minutes) and tense until the final lopsided tiebreak. Sharapova will now try to break a winless streak of her own against world No. 1 Amelie Mauresmo.

"We've always had tough matches," said Golovin, who lives in Miami but represents her family's adopted home of France. "I remember when I was young, she always used to beat me like love and love. When I started playing on the tour, we always had really tough three-setters. Mentally, I'm sure she doesn't really like to play me."

A Mauresmo victory "would be great for French tennis, and plus, she is my friend," the 27th-seeded Golovin said primly, a smile dancing on her expressive features as she talked to French-speaking reporters.

Sharapova fielded as many questions about her "I Feel Pretty" Nike campaign as she did about tennis. But she did observe that she'll have to be near-flawless to get the best of Mauresmo, who has beaten her all four times they've played, most recently at Wimbledon.

"I had all the momentum in the world going into the third set at Wimbledon," she said. "I didn't use that to my advantage. When you're playing a top player that is confident, if you don't take your chances, you should be getting your ticket."

The Sharapova-Golovin match didn't live up to its operatic prequel in Miami last March, where Golovin saved four match points but had to withdraw after tearing ligaments in her ankle digging for a baseline shot in a close third set. Sharapova took some heat for turning her back and not being terribly solicitous during a medical timeout where Golovin was obviously in severe pain.

Golovin, who was playing in her first Grand Slam quarterfinal, missed three months with the injury. She was primed for revenge, but couldn't overcome Sharapova's high-pitched shrieking, her distractingly deliberate manner at the service line or the winners she struck at the right moments.

"She really imposes her pace, so it's really up to the opponent to concentrate and not let that bother you," Golovin said. "It's really tough to beat her and play your own game  even if you're up, she never gives up and she actually even plays better when she's down."

She might have reason to wonder whether Sharapova is sticking pins in a voodoo doll somewhere. Down 3-0 in the first tiebreak, Golovin had to call for a trainer to clean and bandage a huge blister on her foot that she didn't even know she had.

"I just hope I can kind of finish a match without actually having any problems with my feet," she said. "I took off my shoe, it's soaked with blood. It's just bad luck."