NEW YORK -- Maria Sharapova never doubted herself for a moment.

Not in the two-plus years since her breakthrough Wimbledon title. Not after going 0-5 in subsequent Grand Slam semifinals. And certainly not after being broken to lose the second set Friday at the U.S. Open against No. 1 Amelie Mauresmo. 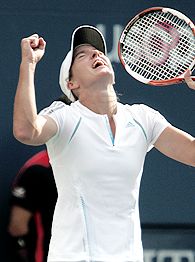 "I just thought to myself, 'It's not over until it's over,'" Sharapova said. "I was still playing good tennis, and I knew that I could win it."

"I came back from nowhere today," Henin-Hardenne said. "I feel lucky to be in the final."

So might Sharapova, who entered the day 0-3 against Mauresmo and with that growing Slam semifinal jinx. But the Florida-based Russian set aside her mediocre middle set and put together a rare double shutout: It was the first time in the Open era, which began in 1968, that a female semifinalist here lost two sets at love.

Now, on Saturday night, she'll try to overcome a 1-4 head-to-head mark against Henin-Hardenne.

Punctuating nearly every powerful stroke with high-pitched shouts -- her "Aaah!" or "Whoo!" so loud at times that spectators snickered -- Sharapova dictated the pace from the baseline and kept Mauresmo away from the net by whipping passing shots at will.

There were moments, such as the start of the third set, that Sharapova would suddenly go silent, swallowing her grunts. And then, flipping the switch, the noise returned, louder than ever. After the match, Sharapova wore a gold-flecked T-shirt with the words: "I feel pretty when I grunt."

Still, unlike Sharapova's quarterfinal foe, Tatiana Golovin, who complained to the chair umpire about the stroke-accompanying screams, Mauresmo said she wasn't fazed.

"You hear it much more when you watch the match than when you play against her," Mauresmo said. "I mean, I just totally don't pay attention to that."

She gave credit to Sharapova for doing a better job of handling the wind that made it tougher to hit deep shots. As for what went wrong on her end, Mauresmo was vague.

Mauresmo won the Australian Open and Wimbledon this year, but the sorts of nerves that plagued her earlier in her career resurfaced Friday. The Frenchwoman finished with 38 unforced errors and only 10 winners, half as many as Sharapova.

"That," Mauresmo said, "made the difference."

She did put up a fight, breaking Sharapova to end the second set with a forehand winner to end a 22-stroke exchange. Mauresmo jumped and did a scissors-kick and seemed to be right back in the match.

Both players headed to the locker room for a bathroom break before the third set, and this is what went through Sharapova's mind, she said later: "If I could beat her 6-0 in the first, I could definitely do it again. There was no doubt in my mind."

While Sharapova reached her first U.S. Open final, French Open champion Henin-Hardenne -- the runner-up at Melbourne Park and the All England Club -- became the first woman since 1997 to reach all four Slam finals in a single season. Not without a scare, though.

Serving terribly, and her groundstrokes missing some oomph because of an aching back, Henin-Hardenne dug a big hole, falling behind by a set and a break. 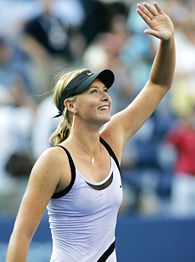 "I was a bit nervous at the beginning of the match. She did put a lot of pressure on me. I could feel she had a lot of motivation ... and I wasn't in a good rhythm," said Henin-Hardenne, the 2003 U.S. Open champion. "That was the kind of match I would have lost a year or two years ago."

Jankovic was a point from taking a 5-2 lead in the second set -- in other words, she was five points from victory -- when she completely fell apart after a long argument with chair umpire Enric Molina.

"I had the match. I thought that in the first set I was the better player -- way better," said Jankovic, who was in her first Grand Slam semifinal. "I was controlling all the points, was on the top of my game. She didn't know what to do. That's how I felt: I was dominating."

That she was, even taking time to enjoy the moment, smiling as she glanced at the overhead video boards to watch replays of winning shots. Henin-Hardenne, meanwhile, was double-faulting 12 times through the first two sets, and clutching her back between points. She stopped her quarterfinal victory against Lindsay Davenport for a massage from a trainer -- but Jankovic wondered aloud how badly the Belgian really felt.

"I was looking at her, and she was, 'Oh, I have pain in my back,' or whatever she was doing. That's when she was losing," Jankovic said. "Then, when she was winning, all of a sudden she's hitting the biggest serves ever and all that. I'm like, 'Now your back doesn't hurt?' "

While Jankovic was cruising, the seeds for her demise were sown in the fourth game of the second set. Jankovic had a shot ruled out by a line judge and asked Molina if he'd seen it.

His response: "Do you want to challenge?"

She did, and was right, then had another exchange with Molina about whether she should be awarded the point (Jankovic's contention) or whether it needed to be replayed (Molina's ruling). That dispute was rendered moot when Henin-Hardenne double-faulted, making it 4-2 for Jankovic. 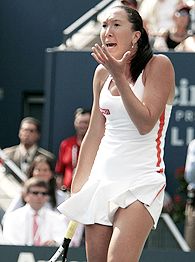 Jankovic faulted, then began a back-and-forth with Molina that devolved into a discussion of who has better vision. She was hoping to get a sense from him whether it was worth challenging the call officially or not. He didn't help, and Jankovic decided not to ask for the instant replay review making its Grand Slam debut.

Flustered, she threw up a second serve that missed for a double-fault, then bounced her racket off the court. Two points later, Jankovic dumped a backhand volley into the net, giving Henin-Hardenne the break. Jankovic dropped her racket, covered her face with her hands and hunched over. The match would last another nine games, but it essentially was over at that point.

"My concentration went down because of the umpire. ... I could have been up 5-2, and it would have been a different story," the 21-year-old Jankovic said. "But what can I do? I learn from my mistakes. I am young, and I hope the next time I won't do the same mistake."