NEW YORK -- For just a few seconds after she hoisted her first U.S. Open trophy, Maria Sharapova looked like a kid and not a polished performer.

The 19-year-old Florida-raised Russian jumped up and came down hard with her prize, apparently not realizing that this precious piece of hardware, unlike the platter she got for winning Wimbledon two years ago, comes in two pieces. The top tumbled off and nicked her in the back of the head as she squeezed her eyes shut as if trying to will away her own clumsiness. 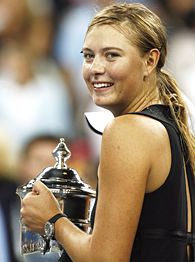 She quickly recovered from that spontaneous moment and spent the rest of the short presentation in Arthur Ashe Stadium displaying camera savvy that rivaled her sensational passing shots. They were her chief weapon in subduing second-seeded Justine Henin-Hardenne of Belgium 6-4, 6-4 to capture her second Grand Slam title.

"I experienced it two years ago, and I knew that I wasn't done, I had a lot more in me," Sharapova said. "That was just the beginning. This is not just preparation that happened a couple weeks before the tournament; this is preparation that I've done ever since I was a little girl with the help of my amazing family."

The margin between the players wasn't that great, although you wouldn't have known that from Henin-Hardenne's comments.

"She served much better," said Henin-Hardenne, 24, who made all four Grand Slam finals this season and won one, the French Open. "I gave her too much time, you know, to organize her game. I played too short. Not aggressive enough."

The Belgian, who won the 2003 U.S. Open, said she had no physical problems Saturday night. She gave Sharapova credit for taking more risks and said she wasn't able to drive balls as deep as she wanted.

"I couldn't play that aggressive," Henin-Hardenne said. "She had a lot of time, and she was going for the winners. She did come to the net. I didn't. Sometimes it's like this. Even if you know you have to do it, it's not easy to do it in every match.

"So she's been brave tonight, and more than me. That made a big difference."

Sharapova used that assertiveness to try to orchestrate her post-match news conference. "Let's try to make this a positive session tonight -- please, por favor," she said primly as she sat down.

But her answers devolved into sarcasm and combativeness as she parried questions about gestures her father and her hitting partner made during the last two matches from the courtside box where they were seated. Her father, Yuri, has held up a banana on two occasions in an apparent reminder to eat, and the hitting partner, Michael Joyce, held up four fingers Saturday in a signal caught on camera.

"It might have looked like a third base coach with props, but we didn't consider it tennis instruction," Widmaier said.

Sharapova's agent told reporters that her support team was simply trying to keep her from becoming dehydrated.

But Sharapova elected to be defensive and confrontational about the incidents. When Sharapova was asked to comment on the four-finger sign, which she returned from her seat, the player brought up the fruit controversy herself.

"I just won a Grand Slam," she said. "The last thing I'm going to talk about is some fingers or a banana, all right? I hope you got that one, thanks."

"Can you tell me, if someone tells me to eat a banana, do you think that's the reason why I'm going to win a match?" she asked. She added later, "This is great advice. We should tell all the players to, you know, have a banana and they're all going to win. Great." 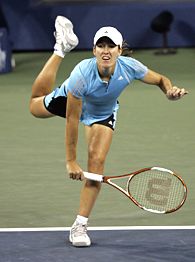 The compact, agile Henin-Hardenne broke Sharapova in the second game of the match with a forehand crosscourt volley on the run. Sharapova broke back in the next game, chipping a ball softly over the net to punish Henin-Hardenne's great get in the corner. Henin-Hardenne fell behind 5-4 when she hit a backhand slice short to lose her serve, and Sharapova sealed the set with a service winner.

One break was all Sharapova needed in the next set, and it came at 3-3 when Henin-Hardenne let her rival back into the game after being up 40-15. The Belgian badly over hit a forehand on the game's second deuce and smacked a forehand into the net on the next point.

After Henin-Hardenne netted another forehand on match point, Sharapova knelt on the court facing the box where her father was sitting and curled into a tight ball. Then she got up, threw her arms into the air and scampered toward the net. She and Henin-Hardenne clasped hands and exchanged the obligatory double kiss.

"I love Daddy," she said, giggling, during her on-court interview as her father spoke animatedly into a cell phone.

Almost everything Sharapova does seems languid except for her searing ground strokes. Her routine at the service line is the equivalent of a compulsive baseball player's ritual at the plate: hop-hop and bounce, bounce, bounce; smooth hair slowly behind each ear; two more bounces; then toss and let fly.

"She has the right to take her time," Henin-Hardenne said.

Now Sharapova has the right to say that her precocious victory at Wimbledon wasn't a fluke. It remains to be seen how she handles being a champion.

Bonnie DeSimone is a frequent contributor who is covering the U.S. Open for ESPN.com.