Jelena Jankovic has a large 2 on the back of her red "I love Madrid" T-shirt, and mixed feelings about it. The shirt is a WTA Tour-issued prop for a press conference in Jankovic's honor at the Acura Classic in San Diego, and the digit means she's the second player (behind No. 1 Justine Henin) to qualify for November's season-ending WTA Tour championships in Spain. But if there's one thing Jankovic shares with her Serbian countrymen, it's pride; being second best doesn't sit well. "As a nation, we are satisfied only with being No. 1," she says. "If we play, we want to be the best or we don't want to play at all."

And yet 15,000 Serbs flocked to Nikola Pasic Square in Belgrade on June 10 to welcome Jankovic, Ana Ivanovic and Novak Djokovic home from the French Open -- not because any of them had finished on top, but because they had conquered the belief that tiny, war-torn Serbia lacked the tools to produce elite-level tennis players. At Roland Garros, all three made the semifinals; Ivanovic lost in the final to Henin. For once Serbia was thrilled with runner-up results, probably because the country's sports fans have had little to party about since 2002, when 100,000 people celebrated its victory at the world basketball championships. 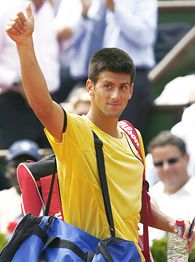 Jankovic, Ivanovic and Djokovic have known each other since they were kids. They practiced and competed with one another between 1991, when Slobodan Milosevic's tanks first rolled through Belgrade, and 1999, when the first NATO bombs fell. They were children during a time that was no time for children. And now they find themselves relishing their success, their future and the doting of a nation that historically has cared for basketball first, soccer second and second-place finishers not much at all.

The significance of the turnout in the square wasn't lost on Djokovic, who made a promise to the masses: "In the next 18 months, one of us will win a Grand Slam title."

That might be easier said than done. Djokovic, who's 20, is ranked No. 3 on the ATP Tour, behind the formidable bloc of Roger Federer and Rafael Nadal. He's a combined 3-9 against Federer and Nadal. Jankovic, 22, and Ivanovic, 19, are ranked No. 3 and No. 5 on the WTA Tour, respectively. They are a combined 0-9 against Henin, who owns six majors. "So close," Jankovic says, "but so far."

Then again, the odds of a Serb's winning a Grand Slam event are much better than were the odds that this trio would move from the middle of the Balkan pepper pot to the upper echelons of tennis. The motivation for each was basic: At a time when tanks and bombs were a way of life, tennis was a way out. But to understand their drive, it is necessary to understand where they come from.

Even today in Belgrade, a city of 1.6 million people, there are fewer than 60 tennis courts, and only about 10 can be used in the winter. When Ivanovic received a racket for her fifth birthday, in 1992, there were half that number of courts. During the summer she practiced on the clay surfaces of Tennis Club AS; in the winter she played inside, in a drained, turf-lined swimming pool that had been converted into tennis courts. Crosscourt volleys are a no-no here, lest somebody run into the wall. And though the carpet is peeling and the nets are ragged and the lines are worn nearly invisible, practicing in the pool is still better than practicing in a coat and gloves on one of the city's unheated, bubbled-over clay courts. "We must be honest," says Dusan Orlandic, general manager of the Serbian Tennis Federation. "In Belgrade, it is still a privilege to play in the swimming pool."

Orlandic and federation president Slobodan Zivojinovic, who was a top-ranked doubles player in the 1980s, are excited to talk about the new training center that will sit on land donated by the city on the west side of the Sava River. The Serbian Federation now resides in a nondescript rented house at No. 26 Stanboliskog, in a residential neighborhood near Red Star Belgrade's soccer stadium. A small gold plaque next to the doorbell identifies the federation: Teniski Savez Srbije. Inside are faded Oriental rugs and battered desks for Orlandic, Zivojinovic and two administrative employees. Every day, Orlandic works the phones to line up sponsor dollars to help fund the center. Construction will begin in September on eight clay courts, four hard courts, four indoor courts and a ministadium with 4,000 seats.

Tennis officials hope the new facilities will entice the next generation of stars to stay in Serbia instead of moving abroad to train. (Jankovic left for Florida, Ivanovic splits time between Spain and Switzerland, and Djokovic lives in Monaco.) Orlandic and Zivojinovic are also using the center as bait: They have opened negotiations with the ATP to bring a men's tournament to Belgrade.

In other words, the Serbs are building a tennis program in reverse. "I'd never heard anyone say the Serbs are coming," says Larry Scott, head of the WTA Tour. "They are exceptional athletes, but in a way, they came out of the blue." China and Russia poured millions into training centers around the country and produced dozens of players, while Serbia, which had no national tennis program
in the mid-'90s, randomly produced three contenders. "You really can't explain why all of a sudden we are three top players in the world," Jankovic says. "Maybe we push each other to keep improving."

In turn, they have pushed their country to keep pace with the demand created by their success. "At the moment, tennis is brand No. 1 in Serbia," Orlandic says. "We have 40 percent more kids playing tennis now than we did five years ago. And in the past five months, we have 22 new clubs. For sure, it is only because of these three." Serbia now has six men ranked in the Top 250 (next after Djokovic is Janko Tipsarevic, at No. 51), while seven Serbian women have broken the Top 500.

The up-and-comers are too young to remember the NATO bombings of Belgrade, which many Serbs refer to as "78 days of shame." After diplomacy failed, NATO attempted to drive Milosevic from power and end the war he was waging in Kosovo, a region in southern Serbia. Air-raid sirens shattered the city's usual calm and sent residents scurrying for cover. Still, despite more than 23,000 bombs and as many as 1,500 civilian deaths, many residents remained defiant. Children attended school. Adults went to work. Young tennis players never missed a lesson. The bright-red clay courts of Belgrade, clearly visible from the air, provided a safe haven. "Who would actually be that dumb to bomb a tennis court?" says Slobodan Vojinovic, director of the Red Star Tennis Club, which has stood behind the same rusted green door off the traffic circle at Mije Kovacevica since just after World War II. "When the airplanes were coming, a siren would tell us to run away. But we lived a normal life on the court."

By the time the bombs began to fall, Jankovic, who had trained at Red Star from 1994 to '97, had already moved to Nick Bollettieri's tennis camp in Bradenton, Fla. She spent teary nights watching CNN as familiar buildings crumbled, one next door to her older brother's apartment. Ivanovic and Djokovic were just 11 and still living in Belgrade with their families. "The first night the sirens came on, I took all my books, and we went in the cellar because we didn't know what to expect," Ivanovic says. "But later on my parents said we weren't going to do that anymore because spending all night in the cellar is not good. It gives you trauma." Djokovic and Jankovic refuse to talk about the trauma, preferring to leave it buried in the past. Like Ivanovic, they are busy focusing on the future -- and on being No. 1, of course.

Serbia's last top-ranked player was Monica Seles, born in Novi Sad, in what was then Yugoslavia, the winner of six Grand Slam titles in 1991 and '92. The current players are climbing toward her status with amazing speed. Ivanovic jumped 608 spots in 2004 to finish in the Top 100. By the end of 2005, she was in the Top 20, and she has jumped nine spots this year. Jankovic lost 10 consecutive matches early in the 2006 season, falling to No. 38, but she climbed back to No. 12 by the end of the year; four tournament wins this season have put her within striking distance of the top. Meanwhile, Djokovic was the youngest player in the Top 100 two years ago, the youngest in the Top 20 last year, and is now the youngest in the Top 10.

At Wimbledon, the draw demonstrated just how far the Serbs have come: Jankovic and Ivanovic were seeded third and sixth on the women's side; Djokovic was fourth on the men's. Jankovic lost to France's Marion Bartoli in the Round of 16, while Ivanovic and Djokovic reached the semis, with Ivanovic losing to eventual champ Venus Williams and Djokovic falling to Nadal. "We were so proud," says a Belgrade taxi driver. "But Wimbledon, it is fixed." He's kidding, of course, but not about the first sentiment.

Occasionally the Serbs choose sides. Some root for Ivanovic, who has received worldwide attention for her monstrous serve and forehand as well as for her striking looks. Others pull for Jankovic, who's had greater success on Tour (but is 1-4 against Ivanovic), because they love her tenacity and the way she pounds her two-handed backhand. And nearly every sports fan in Serbia is behind the speedy, smooth-stroking Djokovic in his efforts to catch Goliath (a.k.a. Federer).

When one of them wins, Serbia wins. And with the U.S. Open looming, Serbs are not only watching all three players on TV with a fervor once reserved for soccer, they're also dotting the stands at tennis stadiums around the world. Cries of "Napred, Serbia!" -- Forward, Serbia! -- have pierced the pre-serve silence in Melbourne and Miami and San Diego. "Everywhere I play, I hear my language in the stands," Jankovic says. "And it's not just from one or two people. There are lots."

Ivanovic figures that with her power game, the hard courts of Flushing Meadows are as good a place as any to win her first major. Last season she claimed the U.S. Open Series title with a win at Montreal. Djokovic won in Miami and reached the final at Indian Wells this spring -- both hard-court tournaments. And Jankovic, still fidgeting in her red No. 2 T-shirt, is quick to point out her versatility: "I won tournaments on three different surfaces this year. It shows I can compete anywhere."

Yes, Federer and Henin are firmly entrenched as No. 1's, but the way Serbs see it, having three of their own in the top of the draw triples the country's chances. "Being from Serbia makes us tough and eager to prove that we can come from this country that has been through so much and still be successful," Ivanovic says. "We are a very competitive nation. That's one of the reasons we made it. Belgrade is a very alive city now. In Belgrade, everything is possible."

And who can argue with that?

Lindsay Berra is a staff writer for ESPN The Magazine.