NEW YORK -- He is so strong in some ways and so vulnerable in others. Rafael Nadal walked into Arthur Ashe Stadium on Wednesday afternoon with bands of tape wound just underneath both kneecaps. It brought to mind the way some Thoroughbred horses -- whose slender ankles support a massive amount of muscle -- enter the racetrack with their ankles wrapped.

Nadal labored through his four-set victory over Australian wild card Alun Jones, limiting his movement to spare himself as much discomfort as possible. Seeing a player whose game is fueled by running, digging and adrenaline rein himself in was a bit like seeing a NASCAR driver go 55 miles an hour. You could almost feel the engine straining to go harder. 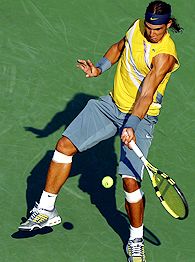 Naturally, Nadal was asked to reveal the extent of the problem in the press conference that followed. He was blunt, with a touch of resignation. This wasn't the right knee that has troubled him on and off since the Wimbledon final where he came closer than ever before to toppling Roger Federer. It was new pain that seared through his left knee during a practice session three days ago.

"Maybe if I am in another tournament, I never go to the court today," he said. "But is the U.S. Open, so is very important tournament for me. I have big illusion for play good this tournament."

We wanted more medical information. As is Nadal's habit, he squinted into the audience, looking for assistance with the translation. The stenographer stopped typing as Nadal spoke rapidly and confidently in Spanish. His media liaison, Benito Perez Barbadillo, obligingly interpreted: "He's got an inflammation on his tendon on his knee. Because of that inflammation, they cannot really know what's going on."

What is going on with Nadal? His recent woes have revived talk that began last year when he had a somewhat listless late season.

Do his style of play, his relentless defending, his build, and his demanding and obviously successful clay-court schedule take too much of a toll in the first part of the year? Should he already be worried, at 21, about wear and tear that could turn into chronic pain? Should the sport worry about the soundness of one its most charismatic personalities?

"The way he plays makes him susceptible to injury because he carries a lot of weight," commentator Jim Courier said. "The hard courts are unforgiving. I wouldn't worry too much about it, but I wouldn't expect him to go through his career injury-free, especially in direct comparison to Federer, who is more like a ballet dancer because he's very light and effortless and graceful on the court."

Courier said the elevated speed and power of the modern game increases the literal shock to an athlete's system. He played more than 700 matches in his career and continues to compete on his own Outback Champions Series senior circuit, but he said his knees are "great" and knocked on the nearest lucky object -- his own head -- to keep that luck going.

"Time will tell, and genetics play a large part in this as well," he said. "To my untrained, nonmedical eye, my experience has taught me that the heavier guys, a guy like [Boris] Becker for example, had knee problems. He was certainly built more like Rafa, not even as close to as ripped as Rafa, but carried a lot of weight on the court. Stopping is more problematic for guys when you have more momentum."

Great Britain's Tim Henman, who is leaving the game at age 32 partly because of back problems, said Nadal's challenge won't be trying to avoid repetitive stress injuries -- it will be managing them.

"I just think it's the nature of the beast," Henman said Wednesday. "When you're built like that, you play like that, when you're playing on hard courts, I think it's almost inevitable.

"I think I'm fortunate that my sort of body type and my game is relatively stress-free. Nadal is a different story. His game is physically so demanding. He's putting so much strain on his body. He had stress fractures in his foot, didn't he? He's got obviously tendinitis in the knees, which I think a lot of guys are suffering with. You've got to manage it as best you can.

"You know that that's always going to be -- that will always play a part in his career."

Being young, Nadal doesn't tend to contemplate long-term consequences. He said he believes he can recover from anything, and maybe he can.

"Is not important injury," he insisted. "Is nothing totally new. A lot of players have problem with the tendon there. That's my normal problem, and I play. I have the same problem four years ago. … My knee is not going worst in the last four years, and I play at the best level, so that's a very good news, no?"

Nadal's hard-earned win Wednesday was his ATP-leading 60th of the year, but that number clearly has come at a cost. It seems like eons ago that he defeated Andy Roddick and Novak Djokovic to win the championship at Indian Wells in March and set everyone abuzz about his improvement on the hard court -- a broader kind of momentum that could earn him a shot at No. 1 as the seasons roll by. What a shame it would be if the greater diversity in his game were partly nullified by fatigue and pain at the end of the season and a virtual no-show at the last and glitziest Slam of the year.

Bonnie D. Ford is a freelancer who is covering the U.S. Open for ESPN.com.