Agnieszka Radwanska of Poland pulled off the stunning upset,
beating the defending U.S. Open champion 6-4, 1-6, 6-2 in a
third-round match that took a startling turn Saturday.

Sharapova seemed to take control by winning eight games in a
row, giving her a 2-0 lead in the final set. Then, she fell apart
and never won again.

"A lot of girls in her position on a big stage in a big stadium
against a top player sometimes get a little nervous," Sharapova
said. "She held on there."

"You'd think I would have the momentum," Sharapova said, "but
I just didn't really feel that way inside of me for some reason."

Sharapova became the first No. 2-seeded woman to lose before the
round of 16 at the Open since Andrea Jaeger in 1981. Her father
could barely stand to watch, moving from his front-row perch to a
seat farther back during the final points.

"I could sit here and blame the wind and blame my opponent. But
there are no excuses," Sharapova said. "I'm not going to throw
myself a pity party here." 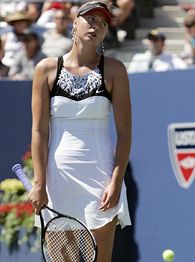 The 30th-ranked Radwanska had a lot to do with Sharapova's
undoing. At 18, the former junior champ at Wimbledon and the French
Open played with poise and smarts, creeping closer and closer to
the service box on second serves, hoping to unnerve the two-time
Grand Slam winner.

"She was the favorite and I think she was more nervous,"
Radwanska said.

At times, Radwanska walked nearly halfway from the baseline to
the net as Sharapova got ready, then backed off at the last second.

"I knew that she hates [it] if somebody is moving on the serve,"
Radwanska said, her braces gleaming in the sunlight. "She made
many mistakes."

A shrewd move by Radwanska. Maybe make that a shrew move -- away
from the court, she likes to play with her pet rats.

"It will be interesting to see if she does it again the next
time I play her," Sharapova said.

"You can see the new generation coming up," Hingis said.
"They're very dangerous. I knew it's not going to be easy. My mom
texted me. She said, 'Watch out.'"

Sharapova's serve was her undoing, especially after early
faults. She won only 23 percent of her second-serve points and
wrecked herself with 12 double-faults.