NEW YORK -- If Justine Henin had taken time last week to fill out one of those stress tests found in pop culture magazines -- the ones that assign point totals to dramatic events in your life over the past year -- she would have been off the charts.

Henin began 2007 as No. 1 in the world, with one of the most admired tactical games in tennis, but all was not well beneath the brim of her businesslike ball cap.

Her marriage was on the rocks, and she hadn't spoken to most of her immediate family in seven years. Although Henin had five Grand Slam wins under her belt, her fellow players and much of the public and the media perceived her as frosty and criticized her for withdrawing from big matches when she didn't feel exactly right.

Here's what Henin did. She let things fly, both on and off the court. This was her Year of Living Interestingly, the season she got on the plane and understood there would be turbulence and decided she wouldn't let it unnerve her.

This was the year she began to do what her longtime coach and mentor Carlos Rodriguez has been urging her to do for a long time. She dropped some of her reserve and let people get a glimpse of her passion for the sport as well as her skill.

The results -- well, the results have been "magical," as Henin said after winning her second U.S. Open on Saturday night with a 6-1, 6-3 whitewashing of Russia's No. 4 Svetlana Kuznetsova.

"At the beginning of the year, we really asked ourselves where we were going -- we talked about a year of transition," she told French-speaking reporters, referring to the winning combination she has with Rodriguez, who has coached her for 11 years.

"I've grown up a lot. I've had the sense that this is the first time in my life that I'm doing things for myself. I realized that life is short and that it's a precious gift. Now I don't do anything I don't want to do. I do everything because I want to do it."

Henin, 25, of Belgium, called this championship -- which came after defeating Serena and Venus Williams back-to-back in the quarterfinal and semifinal rounds -- her most satisfying Slam.

"There aren't many women who could do that here in New York," she said with quiet conviction. She did it without dropping a set, as was the case in May when she captured her third straight French Open title. 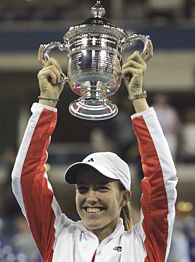 She has reached at least the semifinal round of every tournament she has played since the middle of last season, and she's healthy. Henin actually knocked wood when she said this might be the first season she gets through without injury.

Nothing has diverted Henin -- not divorce, not being diagnosed with a sudden onset of chronic asthma in March, not an emotional reconciliation with her family a few weeks before the French Open spurred by an older brother's near-fatal car accident, not the stunning upset pudgy French wonder Marion Bartoli handed her in the Wimbledon semifinals, not the fact that announcer Dick Enberg inadvertently addressed her as "Henin-Hardenne" -- her now-defunct married name -- during the trophy ceremony.

"No, I don't care about that," she said, flashing the smile that has been a standard all season. "I heard it, but that was OK."

Rodriguez told reporters he felt Henin had finally come out from behind the wall she'd constructed to try to hide any frailty from fans or competitors. "She understands, 'I am a human being, and human beings can have failures,'" he said.

Henin readily admitted the change. "I could feel a big difference this time in the States when I came here," she said. "People were coming much more easily to me. I think I look more open. I look [like] myself. I can be a funny person. You know, people that really know me, I love spending time with people that I love. I'm a normal person.

"  I think that people really start to really know me a little bit better, and it's been a big difference in my life the last few months."

Not that she doesn't have small lapses. Serving for the match, Henin was distracted briefly by a spectator who let out a war whoop between her first and second serves. She committed a double fault, one of seven she logged for the night.