NEW YORK -- Roger Federer sure gave Novak Djokovic chances,
plenty of chances, to pull off a major upset in the U.S. Open
final.

Federer knows how to win these things, while Djokovic is still
learning, and that made the difference Sunday. Hardly at the top of
his game, Federer came through, beating Djokovic 7-6 (4), 7-6 (2),
6-4 for his fourth consecutive U.S. Open championship and 12th
Grand Slam title overall.

Federer is the first man since Bill Tilden in the 1920s to win
the American Grand Slam four years running, and, still only 26
years old, he moved within two of Pete Sampras' career record of 14
major titles.

"I think about it a lot now," Federer said of Sampras' mark.
"To come so close at my age is fantastic, and I hope to break
it."

How many Slams can he win?

This one was a close call. The 20-year-old Djokovic was in his
first Slam final, yet he led 6-5 in each of the opening two sets.

In the first, he held five set points. In the second, he held
two. 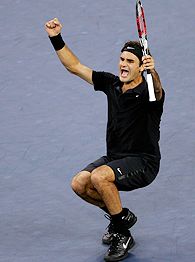 Federer erased all of those, showing the craft and cool that
have allowed him to hold the No. 1 ranking for the past 188 weeks,
the longest run ever.

"My next book is going to be called, 'Seven Set Points,'"
Djokovic said, flashing the same sort of humor he displayed when he
did on-court impersonations of other players after his quarterfinal
victory.

On a more serious note, the No. 3-seeded Djokovic said of
Federer: "Once again, he showed he's the best."

In Djokovic, Federer was facing the only man to beat him over
the past three months, but that was in early August at Montreal,
not early September at New York, and in a Grand Slam tuneup, not
the real deal.

So, not just talented with a racket but prescient, too, Federer
pretty much predicted what would transpire. Shortly before walking
out for Sunday's match, he said knowingly, "It'll be interesting
to see how he handles the final."

Afterward, Federer spoke about having enjoyed getting another
shot at Djokovic.

"New guys challenging me -- this is my biggest motivation out
there," Federer said. "Seeing them challenging me, and then
beating them in the finals."