NEW YORK -- Nothing in Ernests Gulbis' record this year indicated that he was poised to make a breakthrough at the U.S. Open.

The 19-year-old from Latvia, one of the former Soviet republics, showed promise by rising 300 places to No. 139 in the rankings last year, but on paper, it looked like he still was in transition. He had played mostly lower-level Challenger events and hadn't won back-to-back matches on the ATP circuit -- where he was 4-11 coming into the Open -- all season.

Sunday night, he learned what it's like to be a winning underdog in New York. A surprisingly large crowd at the Grandstand court chanted Gulbis' name in the late stages of his stunning third-round upset of eighth seed Tommy Robredo of Spain. 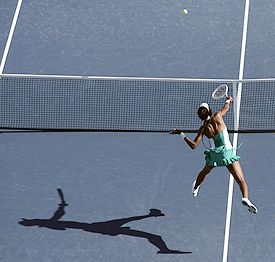 Venus Williams (and shadow) improved to 4-0 against Ana Ivanovic with a 6-4, 6-2 fourth-round win Sunday.

4 -- Number of sets women's No. 1 seed Justine Henin has won at love through the first four rounds. Henin heads into her quarterfinal match against Serena Williams having lost a total of 11 games.

Multiply Robredo's ranking by 11, and you get Gulbis' position on the ATP charts. In another nifty bit of numerology that explains the result, Robredo had fewer wins (seven) than his ranking, never an encouraging equation.

The match, ostensibly scheduled for the day session, was delayed for hours as two previous men's matches went the maximum five sets. Gulbis and Robredo didn't take the court until 10 p.m., but then Gulbis made fast work of the Spaniard, waxing him 6-1, 6-3, 6-2 in 91 minutes, to end at 11:31 p.m.

"I didn't think it was going to be so easy," said Gulbis, a bright, confident teenager with chestnut hair, hazel eyes and a quick smile. Until his post-midnight press conference, he was the only player in the 128-man draw who hadn't been requested by journalists.

"I felt a little bit of pressure at 3-0 (in the third set), because guys in the top 10, if you don't finish them, they can turn the match around in a second," Gulbis said.

His next opponent also is a high-ranked Spaniard, 17th-seeded Carlos Moya, who played a taxing five-set match Sunday.

"Maybe I'll be more fit for the match," Gulbis said.

Gulbis' grandfather, Alvils Gulbis, was a star for the old USSR basketball team, and Ernests began playing tennis with his grandmother when he was a young child.

Gulbis, the first player from his nation to crack the top 100, now joins a very small subgroup of elite athletes from Latvia, which gained its independence in 1991. Andris Biedrins starts for the NBA's Golden State Warriors, and Jelena Prokopcuka is a two-time winner of the women's New York Marathon.