WIMBLEDON, England -- In brushing aside Andy Roddick in straight sets Sunday to grasp his third successive gentlemen's singles title at Wimbledon, Roger Federer again produced some shots that seemed almost ethereal. That is a fitting place to begin trying to assess one of those rare talents that could elevate the whole game to a new stratosphere.

Federer has made the extraordinary his norm on the grass courts of Wimbledon, the exceptional his standard. He is so far above his contemporaries, at least at the All England Lawn Tennis & Croquet Club, he already shares the rarefied air of comparisons with transcendent champions of the past. They look like his only real rivals. 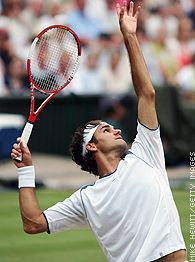 We thought it might be eons before we again saw the likes of Pete Sampras -- seven-time singles champion at Wimbledon in 1993-94 and 1997-2000, winner of a record 14 Grand Slam titles. Now we are witnessing the continuing reign and ascendance of Federer, who was 19 when he dethroned Sampras in the fourth round in 2001. He won his first Wimbledon crown in 2002 and doesn't seem likely to give it up soon.

They were born under the same sign, Leo the Lion, a decade apart -- Sampras on Aug. 12, 1971, in America, Federer on Aug. 8, 1981, in Switzerland. Leo is said to be the most dominant and spontaneously creative of the characters of the zodiac. Federer, who also won the Australian Open and U.S. Open last year, is four days older than Sampras was when he won his fifth major.

The only men in the Open Tennis era who have won more Grand Slam singles titles before they turned 24 were Bjorn Borg (eight) and Mats Wilander (six). Boris Becker also had five at age 23. John McEnroe won his fifth at 24, Stefan Edberg at 25.

Federer has now won 35 consecutive matches on grass over a three-year period, 21 of them at Wimbledon. Roddick has the second-best record on grass over that time -- 32-3 -- but has been able to take only one set in three meetings with Federer at Wimbledon. Overall, Federer is 9-1, head-to-head.

Roddick was asked if he thought Federer could be the best player ever.

"You're not stretching far to make that argument, that's for sure," he said. "Time will tell. If he keeps up this level, then I think so. I don't know many people in history who would beat him."

The trophy presentation on Centre Court now has the feel of a coronation more than the culmination of a competition. After Sunday's triumph, Federer was asked how it felt to join the likes of Fred Perry (1934-36), Borg (1976-80) and Sampras as winners of Wimbledon hat tricks in successive years.

"To be in that group," said Federer, who has a real reverence for Wimbledon and its incandescent stars, "is something very special."

Tennis was in its infancy then, strictly an amateur diversion for gentlemen and ladies and a glorious garden party. After the first tournament in 1877 through 1921, the format was a "Challenge Round." The defending champion waited for a challenger to play through the "All-Comers." Renshaw, the Dohertys and Wilding only played one match each year.

It should also be remembered that until the advent of the open era in 1968 brought professionals back into the sport's mainstream tournaments, again making the Grand Slams truly grand, many Wimbledon champions turned pro to cash in on the barnstorming tours. Otherwise great champions such as Don Budge, Jack Kramer, Frank Sedgman, Tony Trabert, Lew Hoad and Rod Laver might have "tripled" as well. Laver, in fact, did win four straight Wimbledons that he played -- 1961-62 and 1968-69.

That is why it is so noteworthy that Laver -- the only man to sweep all four Grand Slam titles (Australian, French, Wimbledon, U.S.) in one season twice, in 1962 as an amateur and 1969 as a pro -- has said he is proud to be compared to Federer.

Federer was asked if he could eclipse the Wimbledon records of Borg and Sampras if he stays injury-free.

"I feel like I put myself into position," he said. "This was a very, very big tournament and match for me. Obviously, to get the fifth Grand Slam, but also the third Wimbledon -- I knew the importance of this one, so I was pretty tense going into it."

He didn't look it. His all-court game was in full flight from the start. The only time he looked human was after the last point, when he fell to his favorite lawn and rolled on the turf and then buried his head in a towel of regal purple and shed a few tears of joy.

"I really played a fantastic match, one of the best in my life," Federer said.

"I would consider this even bigger than the U.S. Open final, so this is my best match maybe I've ever played," he said.

Federer is the first man to win the first five Grand Slam finals he played since Tony Trabert in the 1950s. The historical comparisons will continue. Federer lost in the semifinals of this year's Australian Open to Marat Safin and French Open to Rafael Nadal, but he has won his last five matches against Roddick, his last eight against Hewitt and his last seven against Andre Agassi. The past champions are his measuring stick.

I lunched after Federer's semifinal slaughter of Hewitt here with John Newcombe, the Wimbledon singles champion of 1967 and 1970-71 and six-time doubles champion. The topic of conversation was Federer's potential place in history.

"I think he's got his own identity," said Newcombe, now a TV commentator in his native Australia. "He's playing a quality of tennis that is probably the best I've ever seen here. It's amazing. If you line him up against Sampras, give Pete an edge on the serve. Groundstrokes, both sides, you have to give the edge to Federer. Net game and mobility are about the same. Roger may be even a little better mover than Pete. Certainly his backhand is far better than Pete's was."

He has a creativity about him that few players have -- or ever have had, I suggested.

"Absolutely," Newcombe said. "He's just fun to watch. I haven't heard anybody, of all the past champions that are here, who has come up with a weakness."

Imagine you were playing him, I said. What would you try to probe?

I mentioned that I had talked to Roche -- Newk's partner in five Wimbledon doubles titles, now Federer's coach -- and asked if he compared Roger's talent to any particular player.

"He plays a lot like Laver," Roche said, which may be the greatest compliment an Aussie tennis player can give. "His shotmaking, the way he is able to take a ball behind him and flick it for a winner, his ability to adapt to different surfaces, which in today's game is sort of unusual. Rocket is really the one he reminds me of."

"Well, he's more creative than Rod because he's got a different racket," Newcombe said. "Had Rod played with today's rackets, he probably would have been able to do more, so it's pretty hard to compare, because Federer is hitting shots that Laver never hit. You couldn't play like Roger plays with a wooden racket. It's impossible."

"The half-volley topspin-drive passing shot from the back of the court," Newcombe said, laughing at how such a thing defies Newtonian physics. Yet he's seen it with his own eyes.

"He hits the ball so hard, across the court, for a short angle, with a tremendous amount of topspin," he said. "How can you hit it that hard, with that much topspin? They're stringing their rackets differently now. The down strings are synthetic and are strung at a certain tension, and the cross strings are natural gut, strung at a different tension. That allows players to impart more spin on the ball and keep the control."

Court coverage, net game, backcourt game, flexibility of tactics, confidence and consistency, temperament, variety of pace and spin -- can you find anything to quibble about in Federer's game?

"I think he's created his own space," Newcombe said. "Roger has put together a bloody complete package."

So will he challenge Sampras' record for Wimbledon and Grand Slam singles?

"The way things are going, he well could," Newcombe said. "He's only 23. There's no one around who can stop him on grass if he stays physically and mentally right."

And will Roche help him do that?

"Getting Tony to coach him is a very smart move," Newcombe said. "Federer realizes he has raised the bar on everyone, but now everyone else is going to want to get up there. So Roger is looking to raise the bar even higher. He went after Tony for a year before Tony agreed to do it Someone who does that -- you're already No. 1 in the world, you've won Wimbledon twice and you still want to get the very best coach you can find -- you've got to think that guy is going to be around for a while.

"I think Tony will help with the slice backhand, volleys, the second serve -- try to see if he can get a little bit more improvement on those shots -- and just overall discuss the game at this level," he said. "I mean, he still has to conquer the clay, doesn't he? But he has won tournaments on clay; he has all the tools to win on any surface. And I don't think he's going to stop at three Wimbledons. I think he's going to finish up writing his own bit of history here."