The last chance for the United States to avoid getting shut out
of the Wimbledon singles quarterfinals for the first time in nearly
a century rested with a woman who's ranked 62nd, never played in a
Grand Slam's fourth round until Monday and was facing a two-time
runner-up at majors. 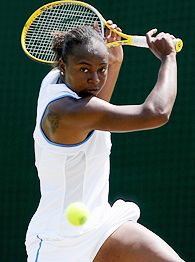 Shenay Perry knew all too well she was the last American
standing -- "Everyone told me," she sighed -- and that, plus the
stage and opponent, overwhelmed her, adding up to a 6-2, 6-0 loss
to No. 7 Elena Dementieva.

At least one U.S. player had reached the men's or women's
quarterfinals at every Wimbledon since 1911, when zero women from
the country and three men entered the tournament. This year, nine
men and 14 women from the United States were in the singles draws,
including Andre Agassi, Andy Roddick and Venus Williams.

This is also the first time at any Grand Slam tournament since
the 1976 Australian Open that no U.S. man or woman reached the
quarterfinals.

"While it was great to get one last chance to see Andre Agassi,
where are the next ones? I'm beginning to question the drive of
some of these guys," said John McEnroe, who's calling Wimbledon
matches for NBC. "It's time to produce."

Citing former French Open winner Michael Chang, an American
of Chinese descent, as a great inspiration for her and all Asian
tennis players, Li said she had her first glimpse of Wimbledon
when watching the tournament on video.

The women's quarterfinals Tuesday are Dementieva vs. 2004
champion Maria Sharapova, Li vs. Kim Clijsters, Amelie Mauresmo vs.
Anastasia Myskina, and Justine Henin-Hardenne vs. Severine Bremond,
the first qualifier to reach the final eight since 1999. Three are
from Russia, two apiece from France and Belgium.

"The last few years -- the last so many years -- America has been
really dominant in both men and women's tennis," Clijsters said.
"I'm definitely surprised that there's no Americans left."

The United States has won more men's (33) and women's (50)
singles championships at Wimbledon than any other country.

Last year, three of the four singles finalists at the All
England Club were Americans. Now, Wimbledon will be the third Slam
in a row without a men's or women's finalist from the United
States.

"Usually you wake up on the second Monday and you have so many
Americans you can follow. This is just another dismal major," said
Pam Shriver, the 1978 U.S. Open runner-up and winner of 22 Grand
Slam doubles titles. "I want to see the warrior back in U.S.
tennis. For me, talent comes in second. It's really your heart and
your desire. It's a little depressing, and it's a concern if you
care about U.S. tennis."

So the question becomes: Why?

"We need to get off of our backsides and make sure we have got
some kids coming up through the pathway," said King, who won six
Wimbledon singles titles. "Also ... a lot more girls are going
into team sports, at least some of the best athletes. But, listen,
we're just not cutting it right now, and we know it."

Paul Roetert, managing director of the U.S. Tennis Association's
player development program, agreed with King that attracting kids
to the sport is a challenge. He also said the USTA is adopting
methods used in other nations to train youngsters, including a new
project with shorter rackets, lighter balls and smaller courts.

"Belgium's done that over the years. France has done that very
well. Roger Federer, Justine Henin came through that process,"
Roetert said.

It could be some time, though, until there are results at this
level.

Perry is coached by the USTA's Ola Malmqvist, who said he didn't
talk to her about being the last U.S. player in the tournament for
fear of piling on pressure.

"It's a position I haven't been in before," said Perry, a
21-year-old based in Coral Springs, Fla. "When anyone's in a
position that they're thrown into for the first time, and being the
last American, it is a little nerve-racking."

She double-faulted twice in the first game and was broken.
Dementieva has long had her own problems with serves and nerves,
and she double-faulted three times to help Perry even the match at
2-2. But that was it.

The American had one winner and 11 unforced errors in the second
set. After missing one forehand, Perry smacked a ball into the
adjacent court, the sort of display that happened a lot Monday, as
tempers rose with the temperature, which topped 90.