WIMBLEDON, England -- Belgium is a country of fewer than 12,000 square miles and about 10 million people, surrounded by the North Sea, Germany, Luxemborg, France and The Netherlands. Based on two of their leading exports, Justine Henin-Hardenne and Kim Clijsters, Belgium has an argument with Russia as to the identity of the reigning superpower in women's tennis. 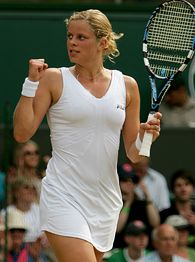 Lately, their appearances in the late stages of important tournaments have been inevitable. Eleven times, they have both reached the quarterfinals of the same Grand Slams. On six of those occasions, they have played each other.

On Thursday, the Fed Cup doubles partners are scheduled to meet a seventh time, in the Wimbledon semifinals.

To get there, No. 2-seeded Clijsters beat Na Li 6-4, 7-5 and earlier No. 3-seeded Henin-Hardenne dispatched French qualifier Severine Bremond in a sticky 6-4, 6-4 match. Both Li and Bremond were making their first appearance in a Grand Slam quarterfinal -- and the results supported that fact.

"It will be the third time in a month," Henin-Hardenne said, "so I think we know each other well enough. But never here at Wimbledon. I don't know what to expect about that."

Clijsters, who at 23 is a year younger than Henin-Hardenne, won the first two Grand Slam meetings between the two. Since then, it's been all Henin-Hardenne. She has won four straight Grand Slam matches -- three of them in the championship final and, most recently, in the 2006 French Open semifinals that launched Henin-Hardenne into the final where she beat Svetlana Kuznetsova. Henin-Hardenne also won their Eastbourne grass warmup match coming into Wimbledon in three sets.

"Obviously, I've lost the last few matches," said Clijsters. "So, yeah, I have nothing to lose. I'm into the semifinals at Wimbledon. I'm going to go for it."

Henin-Hardenne was not particularly sharp in her match against Bremond. The first set was a breakfast that was finally secured when Henin-Hardenne broke her with a beautiful forehand volley winner and backed it up by actually holding serve.

Bremond, ranked No. 129 in the world, was something of a surprise. She has a big forehand and when she came to net didn't look lost. That the match consumed 84 minutes was something of a moral victory. Henin-Hardenne had lost only 13 games in four previous matches, but lost eight to Bremond.

"She wasn't scared of playing on Court 1 in that kind of situation," Henin-Hardenne said. "I had to fight a lot on every point."

Said Bremond, "Was my first time against Justine, first time on Court 1. So it was too much for me maybe for the first time."

Henin-Hardenne has some extra motivation, although she probably doesn't need it. Wimbledon is the one Grand Slam she has never won. The closest she has come is the 2001 final, where she lost to Venus Williams. This one would give her a complete set.

Clijsters trailed Li 2-5 in the second set and finished with a flurry, winning the final five games.

This will be the 22nd meeting between the two Belgians. Henin-Hardenne leads the series, 11-10.

There was a time when the two Belgians did not get along very well. But they decided to put their differences aside and join forces for the country's Fed Cup team. They will host the United States in the semifinals in mid-July.

"We've been very professional adults about that," Henin-Hardenne said. "Like I always say, there's a lot of respect between [us], and that's very important."

Said Clijsters, "People always try to automatically think [that if] you lose a few or win a few that that creates tension or something. We get along.

"I don't know about her  but I like to make friends on the Tour. Trophies, they don't talk to you when you retire."