WIMBLEDON, England -- Amelie Mauresmo sank into her chair
after losing the first set of the Wimbledon final and buried her
face in a towel. 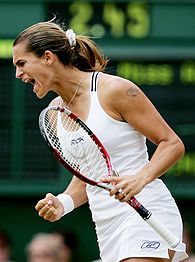 Then Mauresmo straightened up and gave herself a little talking-to, deciding that this was the moment to cast off the
burden of being known as a player who couldn't come through when it
counted.

Can't win the big one? Says who?

Holding her serve and her nerve down the stretch, Mauresmo came back to beat Justine Henin-Hardenne 2-6, 6-3, 6-4 on Saturday to
win Wimbledon for her second Grand Slam title -- and first that she
got to celebrate properly.

"I don't want anyone," Mauresmo said, "to talk about my nerves anymore."

This was a rematch of the Australian Open final in January, when
Henin-Hardenne quit in the second set with stomach problems,
denying Mauresmo a chance to feel what it's like to earn a
championship and leading to some ill feelings between the women.

"The way it ended is different," the top-ranked Mauresmo said. "Now I had this final moment, especially this final point."

She couldn't stop smiling as she clutched the champion's plate,
as she climbed through the stands to hug her coach and supporters,
as she addressed the audience, as she posed for photos, as she
walked off the court with a wave.

Later, she donned a T-shirt made by her sponsor, reading: "2006
Wimbledon Champion. I am what I am."

If the former wasn't the case until Saturday afternoon, the
latter has been for quite some time. Mauresmo willingly dissected
and discussed her problems dealing with pressure, acknowledging it
as a factor in her 13 losses in quarterfinals or semifinals at
Grand Slams.

When she first spent time at No. 1 in the rankings in 2004, she
was only the second woman to do so without having won a major.
Mauresmo reached the 1999 Australian Open final, then didn't get
that far at a Slam until the same place this year.

In January, Mauresmo's Australian semifinal ended when her opponent stopped because of an injury, and then came the anticlimactic final, so the issue of her fragile mental state
lingered. But she got through three-set tests against major
champions in the quarterfinals (Anastasia Myskina) and semifinals
(Maria Sharapova) at Wimbledon, before denying Henin-Hardenne's bid
to complete a career Grand Slam.