Life, Mauresmo has learned at 27, is funny that way. 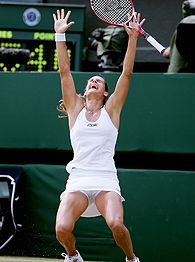 Clutching the Venus Rosewater Dish on Centre Court, Mauresmo leaned into the microphone and said, quite firmly, "I don't want anyone to talk about my nerves anymore."

Done. After she defeated the two fiercest female players in the game in an ultimate set, including Maria Sharapova in the semifinals, there should be no more doubt.

In truth, it was nerves that prevented Henin-Hardenne from attaining her personal Grand Slam. Effort has always been her calling card, but against Mauresmo, she actually had too much nerve. Henin-Hardenne, after visibly tiring in the second set, repeatedly tried to hit her forehand too hard, too early.

In short, in a strange reversal of fortune, it was she who wanted it too much. Mauresmo, who wanted it just as badly, had the wisdom to relax and let it come to her.

Afterward, she was asked if the constant criticism over the years hurt her.

"No, it didn't hurt," she said, "because I was realistic and I could see how nerves got involved. That's how I am. That's how it is.

"Things come when they have to come. It seems that I finally found how maybe to handle the nerves a bit better, how my game is."

Back in January, Mauresmo played dashing tennis in the Australian Open and was up a set and 2-0 when Henin-Hardenne wrenched the joy from the occasion. She retired, complaining of stomach distress brought on by anti-inflammatory drugs she had taken for a shoulder injury.

In Mauresmo's mind -- the only place that really matters -- Australia and a victory at the 2005 year-end WTA Tour Championships in Los Angeles changed everything. After winning her first Grand Slam singles title after 31 unsuccessful attempts, in a Phil Mickelson sort of way she has now won two of three.

Mauresmo is the first Frenchwoman to win Wimbledon in 81 years, going back to Suzanne Lenglen. To do it, she ended Henin-Hardenne's prodigious streak of 13 consecutive Grand Slam matches without losing a set.

Afterward, Henin-Hardenne complained of being tired after playing 18 matches in the last five weeks.

"No regrets about that," she said. "Generally, very good tennis. It's been pretty tough emotionally, mentally -- maybe more than physically these last few weeks.

"I kept fighting to the end, but she kept serving well. There is nothing to say. She took more opportunities than me."

Physically, the two French-speaking women possess the most lyrical and complete games among their peers. They have extraordinary one-hand backhands and the desire and ability to move forward, which is critical at Wimbledon.

"The player who will be the most ambitious, who will take the opportunities, who won't be too scared to move forward, try to take her chances, will win," Henin-Hardenne said before the match. 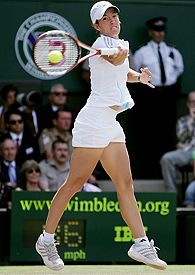 Bravery -- some would call it mental toughness -- has always been Henin-Hardenne's modus operandi. Listed at 5-foot-5 3/4, 126 pounds, she is the smallest all of the current champions; you have to go back to Chris Evert to find someone who consistently won Grand Slams with a frame that small.

She is, in her mind, the perpetual underdog -- the Lleyton Hewitt of the women's side.

Mauresmo, of course, has been the poster girl for choking. A veritable tension convention.

"It's a big factor," Mauresmo allowed before the match. "Emotions are a big part in women, so in women's sports also. Yeah, it makes it pretty exciting. Sometimes you suffer a lot also."

In the 2004 Wimbledon semifinals, she was leading Serena Williams by a set and held a point for a 4-1 lead in the second -- and lost. In last year's semifinals she was similarly ahead of Lindsay Davenport (3-1 in the second) -- and lost.

This year, however, was different. In the semifinals against Sharapova, she again found herself with a commanding lead -- up a set and 3-1, love-40 on Sharapova's serve -- and, typically, blew the second set. But in the third set, against her history, Mauresmo rallied and won 6-2.

"I'm trying. I'm trying," she said. "I'm trying to learn from the bad moments I had, learn also from the moments where I was able to overcome these moments of tension.

"We're all very different. We've seen Justine had very different experiences. She was able much younger than me to control her emotions better."

Both women, true to their words, came out aggressively, rushing net at every opportunity. The opening game was a back-and-forth affair that was played largely inside the service lines. On her third break point, Henin-Hardenne sent a deep ball to Mauresmo's backhand and, sprinting to net, knocked off a backhand volley winner.

Henin-Hardenne's plan was to rush the net at all costs -- sometimes even after returning Mauresmo's serve. This seemed to unsettle Mauresmo. In the seventh game, Henin-Hardenne broke her again, this time with a huge service return that Mauresmo could only reach with the frame of her racket.

The first set point was the occasion for Henin-Hardenne's first ace of the match, which she stroked on the 31st minute.

One key was Mauresmo's insistence on approaching net, even when it wasn't working. She would wind up losing one more point (23) than she won (22) at net, but she never stopped trying to pressure Henin-Hardenne.

At the top of the second set, Mauresmo seemed to loosen up, while Henin-Hardenne visibly tightened. The Belgian double-faulted when she, inexplicably, nearly whiffed on a second serve. She was broken for the first time, in the second game, when her lunging forehand volley hit the net. There were times when she tried so hard to take the ball early that she mis-hit it.

Mauresmo had several good looks at Henin-Hardenne's serve in the fourth and sixth games, with six deuces, but failed to convert a break. When Henin-Hardenne broke back in the seventh game, her advantage was gone.

But then something odd happened. Actually, Mauresmo happened. She broke right back. A cross-court forehand winner sent her into a backward fist-pumping posture. She won the set and, after weathering three break points, matched Henin-Hardenne with her own resounding ace.

Mauresmo scored the first service break in the third set by employing the same rope-a-dope tactics she used successfully against Sharapova. Repeatedly, she would slice back Henin-Hardenne's powerful ground strokes and wait for a mistake. The Belgian made three consecutive unforced forehand errors and a hasty backhand into the net gave Mauresmo the upper hand -- not always a good thing.

But on this occasion, Mauresmo did not waver. Twice on her second-to-last service game, Henin-Hardenne came up with great shots, and twice Mauresmo answered. Serving at 5-4, 30-all, Mauresmo served and volleyed and won the point with a backhand volley winner.

Can't finish? Mauresmo hit two of her eight aces in that final game. When Henin-Hardenne sent a forehand into the net on match point, she fell to ground and covered her eyes.

Mauresmo had maintained that winning the way she did in Melbourne did not diminish the achievement. This did not prevent someone from asking her to describe the difference in lifting the Australian Open and Wimbledon trophies.

"It's a different trophy," she said coyly. "It's round. It's smaller.

"It felt great in Australia. It feels still great here. Of course, the way it ended is different, so I had this final moment, especially this final point."

The victory may change the chemistry in women's tennis. Henin-Hardenne is still the most dominant women's player -- with five Grand Slam singles titles in the last 12 contested -- but with two of the last three, the No. 1-ranked Mauresmo is suddenly a player. With Lindsay Davenport nearing the end of her career and the Williams sisters often injured, Mauresmo and Henin-Hardenne may meet again in a Grand Slam final -- possibly as soon as the U.S. Open.

When Mauresmo sat down for her interview, and the press attendant announced her as the Wimbledon champion, Mauresmo raised her eyebrows and flashed a 9-year-old's giddy expression that said, "Yeah, that's me!"

"I still can't believe it," Mauresmo said. "Having to wait so long in between my first and second Grand Slam final, and then having two Grand Slams in the same year is kind of great."

What was the most gratifying aspect of her victory?

After years of self-doubt, she now has all the answers.