WIMBLEDON, England -- Show a tennis player an all-white clothing rule, and she'll show you a million and one ways to push the fashion envelope.

"We're one of the few sports that doesn't have a uniform per se, so we can explore that, and it sets us apart," said Minnesota-born Bethanie Mattek, who has sailed her spaceship to the outer limits of the athletic apparel universe with a few self-assembled outfits.

Mattek ditched her 2006 Wimbledon tomboy look -- which featured knee socks, a tube top over a halter top, a wide bandanna and shorts -- in favor of "a wavy sheer shirt over another, tighter sports bra shirt and a really ruffly skirt, so it was all really flowy and girly," she told ESPN.com Thursday after falling to fifth-seeded Svetlana Kuznetsova of Russia in the second round. "I've had the skirt for a while, but actually just bought the shirt in London." 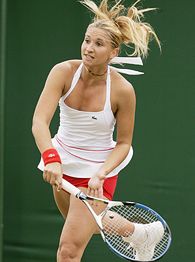 The day after she beat Russia's Vasilisa Bardina to get her first-ever Grand Slam win in a singles match, Mattek saw France's Tatiana Golovin playing with what the British tabloid press gleefully dubbed her "red knickers" -- scarlet short-shorts that occasionally peeked out from under Golovin's white skirt. "They say red is the color that proves that you're strong and you're confident," Golovin said.

Not to be outgarbed, Mattek bought some blue ones, but she went to the rulebook before staging her panty raid.

For the record, the All England Club's regulations require on-court clothing to be "almost entirely white," which means you're legal if your lingerie isn't longer than your skirt. Mattek's reaction: "I can do it! All right! I won't get in trouble!"

Golovin lost to 16-year-old Austrian Tamira Paszek on Thursday and faced a second straight day of interrogation about her undergarments.

"I'm totally within the dress code," Golovin said. "I might be pushing it, but I'm still within the rules.

"You know, I think I've already proved my tennis. I've won my first tournament and I've been top-20 for a while. Obviously, I want to do a lot better. But if they focus on our clothes, I think it's fun, too, because it is me and it's part of my personality, so it comes in a whole package."

"We're all excited when you come from the clay courts and you get all dirty and then you have to come and play on the grass and wear all white," Golovin said. "So I think it's definitely a good custom."

Californian Gussie Moran, the iconoclast whose Ted Tinling-designed lace-trimmed knickers scandalized Wimbledon nearly 60 years ago, would have been proud.

Golovin's garb kicks off our walk down Wimbledon's 2007 runway, with commentary by Mattek, who said she was happy to weigh in even though she knows she's a little too out on the edge for most of her peers.

Federer the accessorizer: What Rafael Nadal did for man-pris with his three-quarter-length pirate pants, Federer is doing for the man-bag -- with matching shoes, of course. His Nike duffel sports the RF logo with subtle mock "quilting" punctuated by mini-Swiss crosses, a pattern repeated on his gold-trimmed sneakers. Four red Swiss crosses representing his four Wimbledon victories dot the space above the heels. Federer also is walking onto the court wearing throwback pants. Who said the emperor has no clothes? 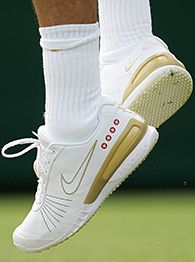 His take: "I think it's important to look good on the court. I think we could have better outfits on tour in general. I had the idea last year of the jacket. Of course, this year we followed it up with an entire outfit because the idea came kind of shortly before Wimbledon, so I didn't have much time to create something. But the jacket still created kind of a nice buzz.  This year, I enjoy wearing the entire outfit again. Yeah, I see that players are more aware now of the details, that the headband matches with the shorts, so forth. I always thought that was important, you know, that the whole entire outfit matches together."

Sharapova's Swan Song: Maria Sharapova made bird the word, tweaking the lines of her dropped-waist French Open dress by making it bleach-white, adding queenly pleats around the neck and rear ruffles that extend from her shoulder blades to the elegant small of her back.

Her take: "There's only so much you can do with white, and it's always going to be traditional. You just think of little creative things and details you can add to a dress." She joked that her coach "started feeding bread" to the frock and played along with reporters who informed her that a hawk patrols the grounds here daily. "Does the hawk usually bite the swan?" she asked. "Jesus, I might have to cut those pleats away."

Mattek's take: Hasn't seen it yet.

Venus on the half-shell: Budding fashion designer Venus Williams appeared in formfitting shorts -- a look we're more used to seeing on Serena, who has made peace with her self-described bootyliciousness -- for the first time. 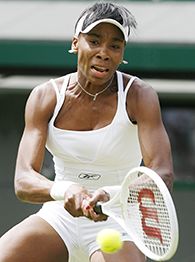 Her take: "My skirt was so big I couldn't fit it, so I had to move to the shorts immediately," Venus said. "I think they just made it too big. " She said she doesn't regard the all-white rule as restrictive: "I think it's easy to be creative. I actually like the all-white. I enjoy the tradition here. Sometimes when they update, I'm not ready to update -- except on equal prize money. It's a beautiful thing, I think."

Mattek's take: "The Williams sisters do a pretty good job of being different."

Blake's bifurcated biceps: A member of the sleeveless movement pioneered by Tommy Haas and Robby Ginepri, Blake reverts to a more modest look at Wimbledon.

His take: "I love a tradition. I love it here at Wimbledon. I still always wear the sleeves here. I'm sleeveless everywhere else but here.  I think some of the guys coming up are really interested in fashion. I shave my head. I don't shave my face that often. I can't say I'm one of those guys that's always in a mirror. I don't know exactly what to do. I wear what Nike tells me to wear. The only times I've had input are when I did the Agassi tribute [at the 2006 U.S. Open], and a few times I've gotten yelled at for mismatching my outfits."

Mattek's take: "A lot of guys look good in [sleeveless]. If they're ripped, and most of them are pretty jacked, I'll go watch those matches."

Bonnie DeSimone is a freelancer who is covering Wimbledon for ESPN.com.