WIMBLEDON, England -- Instead of best-of-five sets, Rafael Nadal and Robin Soderling had to play a best-of-five days.

It took the Spaniard and the Swede a full work week to finish a third-round match while June faded to July. Nadal, who won 6-4, 6-4, 6-7 (7), 4-6, 7-5 in a match that was longer than the score indicates, is still a full two rounds behind defending champion Roger Federer on the other side of the bracket.

If the weather holds -- which seems unlikely at what the venerable BBC has deemed the rainiest Wimbledon in 25 years -- and if the second-seeded Nadal keeps winning, he would have to play matches on four more straight days. The last man who won the final here that way was Pete Sampras, who toiled for five straight in 1998.

No wonder there was a touch of crankiness afterward. Nadal called out Soderling, the 28th seed, for general unfriendliness and unsportsmanlike conduct, including an unenthusiastic handshake at the net.

He told Spanish-speaking reporters he had tried to say hello to the Swede "seven times" without getting a response. "I asked around the locker room and nobody has anything good to say about him," Nadal said.

Soderling's mock pants-hitch -- which he insisted was a joke, and which did, in fact, elicit laughter from the crowd -- did not amuse Nadal, who seems to be growing tired of the frequent questions about his physical tics. 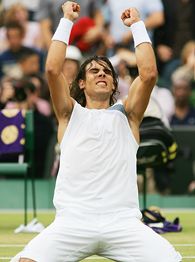 "Not nice," was Nadal's exact phrase. "But everyone have whatever you want.

"In the end, we will see what's happening in the end of the life, no?" he added ominously.

Nor did he have much positive feedback for tournament organizers, whom he blamed for unnecessarily extending the match. Wimbledon's traditional Middle Sunday was apparently not a Fun Day for the 20-year-old.

"Sunday, they take a vacation," he said in the Spanish-speaking session, echoing similar remarks he made in English. "This is a little incredible to me, knowing the weather that was coming. But this is a special tournament and we have to accept their rules."

He offered a distinctly unenthusiastic handshake at the net, then practically sprinted off the court. But the wiry, intense Soderling, currently Sweden's top player, repeatedly refused to take the bait when reporters pressed him about his apparent disdain for the popular Nadal.

"I would never say that about anyone [in] the press conference," Soderling said. "I could talking [expletive] about a lot of people, but I won't do that."

Soderling was somewhat incredulous when he was informed that Nadal took offense when he didn't wave politely on net cord winners.

"He must have been in his complaining mood today," Soderling said. "If my opponent, I mean, gets a lucky shot and he doesn't say I'm sorry, I don't care. For me it's OK. Why should I say I'm sorry when I'm like happiest moment of my life? It's just [expletive]."

Nadal and Soderling's attenuated saga of tennis interruptus played out in five parts -- seven, if you count their two warmups that ended without a point being played. They exchanged punches in 72-minute, 80-minute and 52-minute segments on Manic Monday, two days after the original warmup. Nadal had a match point at about 5:30 in the afternoon in the third set tiebreak, but his money shot, the forehand, sailed just wide and rain later ended play just after 8 p.m.