With the shot that sealed her 6-4, 6-1 win, Williams wasn't so much starting a new chapter in her fascinating career as she was completing a sequel that has become as predictable as each successive Roman numeral in the "Rocky" movies.

Williams' fourth Wimbledon title was a reconfirmation of the reconfirmation she delivered in 2005, when she rocketed out of nowhere to capture one of the most scintillating women's finals in recent years. Since then she's been hurt and accused of disinterest and even occasionally dismissed as a future Grand Slam contender.

Think again. Saturday offered the worldwide release of Venus IV, proving once again that any requiems for this heavyweight are premature.

"This win, it's so much different from the others because the other ones I felt like I was playing in championship form from minute one," Williams said in a candid post-match assessment. The victory vaulted her back into the WTA's top 20, at No. 17, for the first time in a year.

"Here I really had to focus on my game, you know, overcome a lot of challenges, including obviously being seeded low (23rd), those kinds of things," Williams said. "But all in all, it's wonderful. But, I mean, the last time I won, it was a really outrageous way to win. I keep that trophy by my bed. That's the only one I keep close to me. I don't know if it can replace that trophy, but it's so wonderful."

Wherever she chooses to display the latest addition to her matching set of plates, Williams reminded us once again that when she is motivated and healthy, the lawns of Wimbledon are as comfortable as her own back yard.

It would be a tiresomely repetitive screenplay except that few athletes can ratchet up to top form in the biggest pressure cooker of their sport, seemingly on demand. 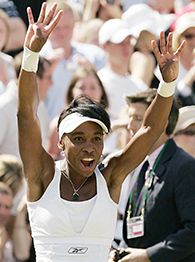 "I can't say a player can beat her when she play like this on grass," said Bartoli, who will rise from No. 19 to a career-high No. 11 in the WTA rankings next week. "I mean, it's not possible to beat her. She's just too good, you know."

Williams' loaded serves and groundstrokes sent seismic tremors up Bartoli's arms. By the end of the match, she was gingerly shaking out her overworked wrists. "I'm not playing against girls every day hitting the ball like this," the 22-year-old Bartoli said.

Bartoli, whose own film should be subtitled "Some Real Tennis Players Have Curves," battled back from a 3-0 deficit in the first set to even things at 3-all. The day after playing the match of her life to oust world No. 1 Justine Henin, Bartoli once again showed fearlessness and conviction when presented with a ridiculously daunting challenge.

Many players might have considered losing the Wimbledon final to one of the best grass-court players in history quite an accomplishment, yet Bartoli wept openly with disappointment in her chair after the match.

Once a ballet enthusiast, Bartoli badly wanted to be the belle of the Wimbledon ball Saturday night and believed she could be before Williams' inexorable game took the racket out of her two-fisted grip. She wasn't about to curtsy to anybody before the last ball was struck. She told French-speaking reporters she found it galling to think that Williams' name would appear above hers in perpetuity.

"I really hate to lose," Bartoli said, stating the obvious. "Of course, tomorrow I won't be that disappointed, because I will realize what I achieve, which is already awesome."

Her consolation prize, aside from a sure spike in respect from her peers, was not inconsiderable: a bouquet of flowers and a note sent to the locker room Saturday morning from actor Pierce Brosnan, the Prince Charming of the Royal Box who inspired Bartoli to her upset of Henin.

"I have to admit that doesn't happen to me every day," Bartoli said.

Brosnan was unable to make a cameo Saturday, but he did have a reasonable excuse -- an invitation to the wedding of "Desperate Housewives" actress Eva Longoria and NBA star Tony Parker.

Williams' win has rich historical context, coming 50 years after Althea Gibson became the first black player to win the event. It's also the first edition of the competition to offer equal prize money to both genders.